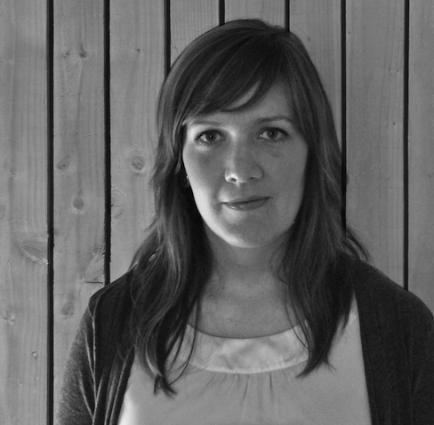 Don’t Kiss Me by Lindsay Hunter is a rare sighting: a heterogeneous story collection that holds together. The book presents a spectrum of peculiar voices that tend to overlap in areas of loss, self-pity, and hilarity. Hunter renders a vernacular, or several vernaculars, that seem to come from your own hometown, a stranger’s childhood, or some inadequate other world. These stories treat the body as a site of desperate eroticism, and of deformation: we see “puddle eyes in that box head,” a “shriveled defeated wiener,” “bready shuddering armfat,” and a face that is “a curdled pie.” Words aren’t wasted in these pages, and nothing is off limits. Thankfully, to read Don’t Kiss Me is also to be exposed to just enough (more than enough) humor to keep going.

Lindsay and I recently had a conversation via email concerning Don’t Kiss Me, her forthcoming novel, and writing in general.

Brooks Sterritt: It seems to be conventional wisdom that a major publisher is a tough sell when it comes to debut short story collections. How did the process work with Don’t Kiss Me?

Lindsay Hunter: That was my assumption, too! I’d been speaking with a couple editors at different “big houses,” but it was always about a potential future novel. So when I realized I had a collection’s worth of stories, I never dreamed of sending it to them. In fact, I initially sent a different version of DKM to a smaller press. I had a dream that press accepted it, and I blogged about that dream and how it obviously meant the opposite would happen. My now editor at FSG, Emily Bell, read that blog post and asked me why I didn’t send her the collection, so I did, and the rest is history!

I think the idea of big houses not being interested in “unconventional” or “experimental” literature is becoming less and less true. Everyone I’ve worked with or spoken to at the “major” publishers is very excited about stuff like that. They all want fresh new voices, different takes on the Great American Novel. They crave newness, just like readers do. 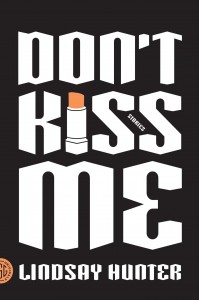 BS: The word “language” tends to pop up in discussions of your work, especially Don’t Kiss Me. Do you consider your writing more “language-based” than most? I’m also intrigued about a comment you made in an interview about “the broken china language of [your] old stuff.”

LH: Dialogue and vernacular are so important to me! So in terms of the “language” that people use to describe something, or to speak to each other, or to hide things or reveal things, that kind of stuff fascinates me. I think it says so much about a character, the way he or she chooses to describe the world. Or to name what’s in that world. Because it’s very different from what someone else might name, or how that person would name it! So in terms of the actual words I choose, and the phrasing, and the fucked-up grammarness of it all, that stuff goes along for the ride. I remember using a word in a story in grad school, and my advisor writing a comment saying, “Would this person know that word? If so, would she use it?” That kind of detail is key in nailing a character’s voice. What would this person say, even if it’s inside her head?

I really try to hear the character’s voice, and I want the story to reflect that voice. I think that’s where the broken china language stuff comes in. Sometimes I want a sentence to be breathless, and it becomes rife with comma splices or is just a run-on car crash of a sentence. To me, that is something that should help the reader. But I think some people don’t like it. But would this character be able to pull a semi-colon out of a lineup? Why should I use one if the character wouldn’t? Now I’m trying to achieve that same effect using proper grammar. I’m trying to repair that broken china. A different challenge, a different aesthetic.

BS: There’s certainly overlap, but it seems that writers tend to skew either toward drawing attention to sentences and technique, or strive for a kind of effortless efficiency that pulls the reader through. Flow or disruption of flow. What’s your take? Am I making all of this up?

LH: I guess for me personally, any “technique” I use is solely to help the reader. Like, I want the reader to be immersed in the voice and world of the character, so that’s how I write the story. Hopefully they’re guided and not disrupted. But I know it doesn’t always work out that way, because I’ve read my own reviews. Ha. I’m troubled by how you said, “…toward drawing attention to sentences and technique…” because I worry my stuff might come off that way to some readers. And I don’t want it to feel like I’m standing in a crowd going, “Ooooh see what I did there? Four comma splices in a row! And over here, a sentence that spans two pages!” You know? I’m not trying to grandstand with my writing. In general, I think technique should inform flow and vice versa. Are there writers who don’t mind if their readers feel disrupted? Probably. But I’d bet it’s because they feel the words and phrasing are just as important as the story. I definitely feel that way, even as I also feel that I still value flow, very much.

BS: Maybe there’s a distinction between writing that screams “look at me!” and writing that demands attention because it’s unusual or remarkable in some way? In “My Boyfriend Del,” I love how Del’s friend Simon is described as having a “neon snotlip” or how in “CANDLES” there’s the line about “THE SWIRLING VOMITOUS TOMB HIS HOUSE MUST BE.” The language is startling, but it’s also pleasurably engaging. Can you think of other writers whose work exemplifies “technique informing flow?”

LH: I think Alissa Nutting embodied that in amazing ways in Tampa. Every sentence was a unique pleasure, carved as if with a scalpel, and the words and sentences and pages all evoked the voice of Celeste in perfect, horrific ways. The voice was the story. Amelia Gray does that shit too! Constantly SMDHing at her stuff. I’m reading Kate Atkinson’s Life After Life right now and to me that’s another example of technique informing flow. A lot of it is about memory and deja vu and lives relived, so there is repetition everywhere, right down to the same words appearing over and over. It’s gorgeous. One of my favorite books is Hellfire, Nick Tosches’ biography of Jerry Lee Lewis, because not only is Jerry Lee’s life FUCKING INSANE, but the way Tosches writes is like if that life were to disintegrate into tiny black splotches that suddenly formed words. It’s alive; every sentence has guts.

To me, those are the books I remember. Like, I also just read Divergent and Insurgent, which was fun, but fun is all it was. Books like Tampa and Hellfire and et cetra kill me over and over, because you can pick any one of them up, read a sentence, and be murdered all over again. 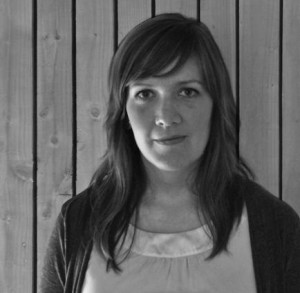 BS: The stories “CANDLES” and “DON’T KISS ME” are written entirely in capital letters, though the all caps effect seems subtly different in each case. In “CANDLES,” the ridiculousness (and humor) of the situation seems heightened by the caps, e.g. “I AM IN THE CANDLE SHOPPE I CAN’T HELP IT” and “I HAVE NEVER KNOWN A MAN WHO HAS MORE THAN TWO SYLLABLES IN HIS NAME.” Could you comment on how these came about?

LH: Both seem like the ultimate in confessionals to me. I wrote “CANDLES” first. I wanted to write about someone who frequents the candle shoppe, and in my mind it seemed to start at a point where this woman had reached the end of her rope, had driven to the candle store because she truly, truly could not help it. And I felt like someone in that state of mind would be having these thoughts come, one after another, like those signs with the all caps LED lettering informing you of a sale on Coca-Cola and diapers. Her thoughts scroll and scroll endlessly, she’s in the candle shoppe and she’s a teenager again, all of it is the same, she is kind of making a desperate attempt at claiming herself among the detritus of both the candle shoppe and her memories.

The character in “DON’T KISS ME” believes she is exposing the flaws in the woman she is clearly in obsessive love with, but she is actually exposing herself. Everyone has a friend like that, in a milder form, someone who goes on and on about how she CAN’T BELIEVE so-and-so uses Crest and not Colgate, and as she’s kind of self-righteously talking, she’s openly scratching her vagina. So this all-capsing felt more like the character’s attempt to distance herself from herself. Confessing to discard rather than claim.

BS: What can you tell us about your novel?

LH: My (still-untitled) novel is coming out next fall on FSG, and I’m very scared by the whole prospect. The odds of it sucking are so high! I’m of two minds: one, hey man, I wrote the book I wanted to write, so suck it, world! Two: holy crap please like it, world. I’m sorry I said that thing about sucking it. Please forgive me.

It’s so hard to know if the story you’re telling matters. You know? Having lived with it for about two years now, I feel even less sure of it than ever. I remind myself of all those “if you haven’t failed, you haven’t lived,” and “failure means you’re still challenging yourself” and “Michael Jordan only made 30% of his shots” tropes, and they work for about five minutes. And then I look around at all the writers I know with books out, and all the books coming out by writers I don’t know, this endless avalanche of books, and I think, Wow, if anyone reads my book at all, that is a success.

At the end of the day, I just want something in what I’ve written to have some kind of emotional impact on a reader. An emotional impact that reader values. At the core of all the crazy hullabaloo involved in putting out a book, that is my “why.”

That’s what I can tell you about the writing of a novel. But in terms of the novel itself, in essence it’s about the friendship and power struggles of two teenaged girls, Perry and Baby Girl. I started out writing a fairy tale about a girl who couldn’t feel fear, and it evolved from there. Perry is pretty, Baby Girl is ugly (and prefers it that way, or so she thinks). Those two things affect every aspect of their lives, especially when those lives descend into chaos. I guess I’ll leave it at that. I’ve come to discover that writers never know how to describe their books. The story is simultaneously too close and too far away, continually expanding and contracting.

Lindsay Hunter is the author of the story collections Don’t Kiss Me (Farrar, Straus and Giroux) and Daddy’s (featherproof books). She lives in Chicago, where she is the cofounder and cohost of the flash-fiction reading series Quickies!.

A Conversation with Eileen Myles about, well, “About Mary”