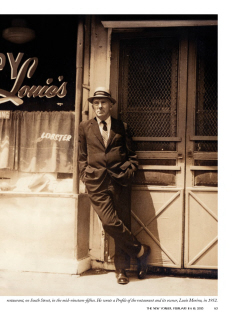 “At any hour of the day or night, I can shut my eyes and visualize in a swarm of detail what is happening on scores of streets, some well known and some obscure, from one end of the city to the other—on the upper part of Webster Avenue, up in the upper Bronx, for example, which has a history as a dumping-out place for underworld figures who have been taken for a ride, and which I go to every now and then because I sometimes find a weed or a wildflower or a moss or a fern or a vine that is new to me growing along its edges or in the cracks in its pavements, and also because there are pleasant views of the Bronx River and of the Central and the New Haven railroad tracks on one side of it and pleasant views of Woodlawn Cemetery on the other side of it or on North Moore Street, down on the lower West Side of Manhattan, which used to be lined with spice warehouses and spice-grinding mills and still has enough of them left on it to make it the most aromatic street in the city (on ordinary days, it is so aromatic it is mildly and tantalizingly and elusively exciting; on windy days, particularly on warm, damp, windy days, it is so aromatic it is exhilarating) or on Birmingham Street, which is a tunnel-like alley that runs for one block alongside the Manhattan end of the Manhattan Bridge and is used by bums of the kind that Bellevue psychiatrists call loner winos as a place to sit in comparative seclusion and drink and doze and by drug addicts and drug pushers as a place in which to come in contact with each other and by old-timers in the neighborhood as a shortcut between Henry Street and the streets to the south, or on Emmons Avenue, which is the principal street of Sheepshead Bay, in Brooklyn, and along one side of which the party boats and charter boats and bait boats of the Sheepshead Bay fishing fleet tie up, or on Beach 116th Street, which, although only two blocks long, is the principal street of Rockaway Park, in Queens, and from one end of which there is a stirring view of the ocean and from the other end of which there is a stirring view of Jamaica Bay, or on Bloomingdale Road, which is the principal street of a quiet old settlement of Negroes called Sandy Ground down in the rural part of Staten Island, the southernmost part of the city.” -Joseph Mitchell 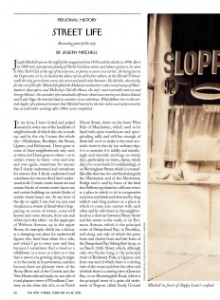 This is the fourth sentence of “Street Life,” from the fragment of Joseph Mitchell’s unfinished memoir that appeared as an unannounced Valentine in the February 11/18 issue of The New Yorker.  It’s a perfectly typical Joe Mitchell utterance—unhurried, modestly insistent upon pace and detail, clear as glass despite the length, quietly lyric in its pedestrian cadence, hugely ambitious under its placid, ambling surface.

It starts as map, naming six locales in New York City’s five boroughs, starting “up” in the Bronx (Webster Avenue) and ending “down” on Staten Island (Bloomingdale Road).  Certain streets and buildings “haunt me,” Mitchell writes; to “wander aimlessly” in his chosen, cherished city is a special pleasure.  Later, the prose lifting to superlatives, Mitchell mentions his particular affection for “the ornamentation of the older buildings of the city.”  Some of these, he says, are “sacred objects.”  “I revere them,” he adds.  The sight of them “will lift my spirits for hours.”  Aimless wandering here acquires definition—taking shape as pilgrimage, a form of worship, circumambulation devout as any Buddhist’s.  If it often opens in malaise, in a “headache” or “some horrifying or unnerving or humiliating thought that came into my mind while I was lying awake in the middle of the night,” it characteristically closes in reverence, a sense of “living connection” (“step by step, out of my depression”).  He’s playing hooky, he says (“I lose my sense of responsibility”), but the play is for mortal stakes—Mitchell walks as Ishmael goes to sea.  It’s at last a secular commedia, and no accident that in the course of his wanderings Mitchell visits so many churches and attends so many services.

As readers we accompany this walker, accept his implicit invitation.  Let us go then—match your gait to mine and plan for all day.  I will go with you and be your guide.  The 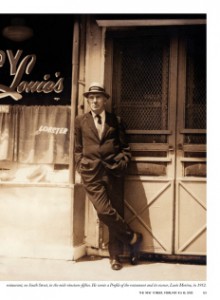 initial movements, as in Dante’s journey, are downward.  The Webster Avenue scene is Weegee turf, infernal, a “dumping-out place for underworld figures.”  Ahead are the addicts and pushers of Birmingham Street, where “loner winos” doze like Belacqua.  But on this earth upper worlds mix with lower, and along Webster Avenue our Virgil in Brooks Brothers suit and fedora, scribbling notes on New Yorker letterhead, sometimes encounters “a vine that is new to me,” as if even rubbed-out mobsters are deserving of decent burial.  Give lilies with full hands.  The North Moore Street spice warehouses on good days seem redolent of frankincense and myrrh, are “so aromatic it is exhilarating,” and Beach 116th Street in Queens features at each end “a stirring view” of ocean or Jamaica Bay.  Emerge to see again the stars.  The “rural part of Staten Island,” given these uninsistent parallels, acquires echoes of Earthly Paradise.  Matilda strolling Bloomingdale Road, singing and gathering flowers, would hold little surprise.

At heart, “Street Life,” with its signature Joe Mitchell sentence as welcoming portal, the places linked by “or on” (“Webster Avenue . . . or on North Moore Street . . .or on Birmingham Street . . . or on Emmons Avenue . . . or on Beach 116th Street . . . or on Bloomingdale Road”) as the people are linked by “and by” (“by bums . . . and by drug addicts and drug pushers . . . and by old-timers”), is the closest thing in print to a Mitchell Apologia Pro Vita Sua, an oblique account of what led The New Yorker’s star writer, author between 1933 and 1964 of forty-nine bylined pieces, to abruptly cease submitting new work after 1964, even as he continued for thirty-one years to report to his office, where editors were too respectful of the man or too awed by his work to inquire closely into what he was working on or when it might be ready; the best answer’s right here, in the revered “ornamentation” at the center of so many walks, since as it turns out Mitchell over the long years of his writerly silence was mostly visiting abandoned buildings and demolition sites, often with his spouse, the photographer Therese Jacobsen Mitchell, salvaging thousands of “sacred objects,” shards and fragments of the “carpentry or brickmasonry or stonemasonry or blacksmithery or tinsmithery or tile setting” so able to “lift my spirits” that they were worth year after year of shared gathering (what adventures husband and wife must have enjoyed together!), careful labeling (there’s what that typewriter was doing, along with writing “Street Life”), and packaging in jars, Brooks Brothers boxes, and Tiffany boxes best understood as reliquaries preserving a precious material archive complementary to the verbal record of the earlier articles and books, Joe and Therese actually putting into practice the goal set almost half a century earlier by James Agee—“If I could do it, I’d do no writing here.  It would be photographs; the rest would be fragments of cloth, bits of cotton, lumps of earth, records of speech, pieces of wood and iron, phials of odors, plates of food and of excrement”—for the not dissimilar project he shared with Walker Evans, and in the process establishing Mitchell as at once arguably the greatest and without doubt the most unostentatious American modernist writer (look one last time at this large and lucid sentence, as plumb and solid as good brickwork), builder via word and artifact of his own New Jerusalem in Gotham’s “smoldering city, the old, polluted, betrayed, and sure-to-be-torn-down-any-time-now city.”

Robert Cochran is a teacher and writer living in Fayetteville, Arkansas. He is the director of American Studies at the University of Arkansas.