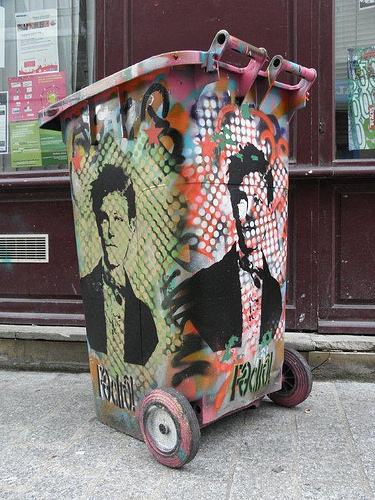 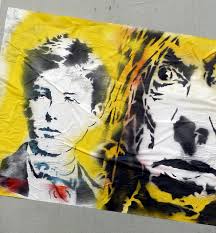 Inimitable street artist Bansky wrote in Wall and Peace, “Speak softly, but carry a big can of paint,” and up and down the rue Dénoyez in the twentieth arrondissement in the Belleville neighborhood, you get palpable sense of this idea. The street is one big moving mural—illustrations, tags and collages cover the walls of buildings and spill out on the street, over doors, around windows. Plant holders, encrusted with primary color mosaics, punctuate tiny uneven sidewalks. In a city known more for its placid grey and steely, somewhat calculated beauty, rue Dénoyez is a surge of color and patterns and portraits, bold, unexpected, jagged.

I’ve gone a couple times this summer and the last time, fresh up on the walls were the expressions Once Upon A Place, L’autre c’est toi, Leave Home! And that’s just a glimpse. Street artists’ work changes daily—sometimes hourly—and includes Fred Le Chevalier, Kouka, Space Invader,  Pedrô!  (who has a studio there), Miss Tic, and unknown, anonymous artists galore. 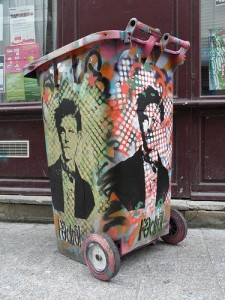 The name of the street comes from a tavern built in the 1830s. Back then, Belleville was just outside of city limits, which meant less taxes and more dancing and drinks at hot spots like La Folie Dénoyez or the Ramponeau Cabaret. Can-can dancer Jane Avril, immortalized by Toulouse Lautrec, was born in 1868 Belleville. Edith Piaf sang regularly at the café-theater Aux Folies on the corner of the rue Dénoyez, and Maurice Chevalier was a patron there. French novelist Daniel Pennac set a series of his books in Belleville (The Malaussene Saga) and not to forget Django Reinhardt’s swingy and super fine jazz tune “Belleville.”

Even with a long, rich history (much longer and richer than the micro-condensed paragraph above), it would be next to impossible to overlook the street scene. Part of the beauty is that you never know exactly what you’re going to get on rue Dénoyez. Rimbaud kept showing up on the walls this summer every time I went—stencils by Pedrô! that were precise and fluid, outlined in black with jolts of color, and Rimbaud’s young face, limpid and stark. Rimbaud first arrived in Paris from his northern hometown of Charleville in September 1871 when he was seventeen years old, with a one-way ticket that poet Paul Verlaine had sent to him. A riotous affair ensued between them and a couple years later, a disastrous weekend reunion in Brussels in 1873 turned dire when Verlaine shot Rimbaud twice, one of the shots wounding his left wrist. “I’m intact and I don’t give a damn,” wrote Rimbaud in his prose poem “Bad Blood” in A Season in Hell.

And so is la rue Dénoyez. There are streets or sidewalks or bulletin boards like this all over the place. You don’t have to be in Paris. No subtitles or dictionaries are required to walk down the street, just the will to look up—and down and maybe over. Take a walk or a stroll or a ramble; see the next thing happening. As the tag says, Ta fête est de voir, Your celebration is in seeing.