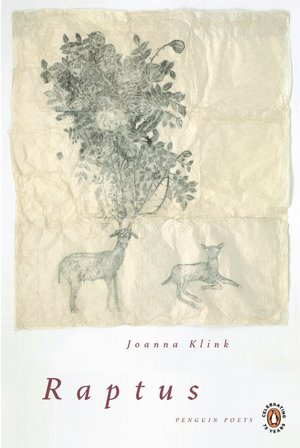 A few weeks ago, I had the pleasure of attending Joanna Klink’s inaugural reading as the Tin House Writer-in-Residence. Before a packed congregation (the event was held in a church), Joanna delivered a perfect sermon, one that seemingly pulled the crowd closer to her with each line read. The poems she elected to share seemed to mirror the night’s unfolding weather. Airy and playful at first, then tinged with melancholy as the sun set. There was something holistic about the entire affair, one that I still can’t quite put my finger on.

Adding to the evening’s enchantment was the introduction given by one of Joanna’s graduate students, Missy Ward. Rather than list biography and accomplishments, Missy spoke of sonic registers and infinite arrangements. Time and care had obviously been given to her thoughts, and I ended up thinking about her words as much as I did Joanna’s (no small feat).

As such, I am happy to share Missy’s introduction below.- Lance Cleland

Every Tuesday afternoon, Joanna arrives at PSU to lead a graduate writing workshop.

Each week she is as eager and curious and engaged as any devoted artist for whom sharing is an expression of living.

Her syllabus this spring features, among five or six equally remarkable quotations, one from the writer and translator Jane Hirschfield. It says: “Here, as elsewhere in life, attentiveness only deepens what it regards.”

But of course it does, doesn’t it?

And of course we need reminder of it.

We need to feel that attention is itself an art and one that, moment by moment, deepens both the writer and the reader via practice.

Art is, after all, a verb as Yoko Ono says and not a noun. 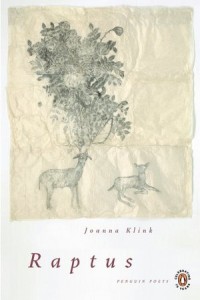 Before I had the chance to learn from Joanna in person I had her three books to pore over and those are most recently Raptus as well as Circadian and They Are Sleeping.

Each of them, you’ll find, features an undeniable attention to sound and an appreciation for what James Longenbach calls “the poet’s materials.”

Our English language is the very “stuff” of poems but is, terrifically, a patchwork of German and Latin and French influence come down through the ages.

The many sonic registers available for use thus allow for sentences like this one from Joanna’s “Winter Field.”

What better witness than this evening snow,

its steady blind quiet, its eventual

completeness, a talc smoothing every surface

through the lumen tricks of ice.

In it you can hear her love of music and arrangement because you hear the conjuring undulates of “better, evening, steady and smoothing” give way to the three little thumps at the end – the “tricks of ice.”

Here we have a trick more subtle than deceptive, one that’s “played” with happy surprise.

It makes me think that material is, for the sonically attentive among us, a play-thing encouraging its own infinite arrangement.

Joanna’s gift for gathering together sonic bouquets is as characteristic as her insistence upon new hyphenated compounds for the English language.

I read her work and think of the urgent “couple-color” in Hopkins’ “Pied Beauty.” I think of the grieving “spectre-thin” in Keats’ “Ode to a Nightingale.”

I wonder, too, whether her fascination with the German-language poet Paul Celan has influenced her taste for union.

I know that German, which is notorious for its long words, allows for hyphenation as a means of clarification.

However, I discovered that German grammar also employs the hyphen during combinatorial invention or “coining of phrases.”

When I encounter art that requires, “as elsewhere in life,” great attention, I sense the original effort of feeling first required of its maker.

But please don’t let me reduce attention to mere seriousness or difficulty.

The attentive approach is, on the contrary, an agreement that allows the subject of one’s attention to expand and reorient the senses and make the attendant new.

It is a generous Whitmanesque multiself whose work is always ever an invitation for its recipient to do the same – to encounter and play and grow and draw vitality from the practice.

Thank you again for being here and please help me welcome Joanna Klink.

Missy Ward is a graduate writing student in the MFA at PSU.

Excerpts from Nepantla: An Anthology for Queer Poets of Color