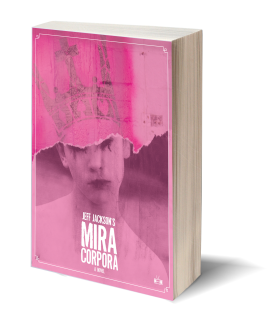 “It’s difficult to say what I might be up to,” the narrator of Jeff Jackson’s debut novel Mira Corpora tells us. His name is also Jeff Jackson. “These days I’m on a need-to-know basis with myself.” Identity and the impossibility of knowing one’s self provide many of the thematic resonances here. Mira Corpora is a beautiful and intense book, a grim and grimy fever dream in the shape of the fictional autobiography; it’s arranged in four sections beginning when the narrator is six years old and carrying us through a series of events that make Dolores Haze’s teenage years feel like an episode of “Leave it to Beaver.”

A brief and perhaps fictional author’s note, informs us that “This novel is based on journals I kept growing up” and “ Sometimes it’s been difficult to tell my memories from my fantasies, but that was true even then.” The plot can’t be summarized any more than one’s life could, but for the sake of context I’ll mention that there is a mesmerizing episode involving a society of runaway children led by a teenage oracle, a cassette tape that might or might not call to mind certain elements of Infinite Jest, and a take-no-prisoners writing style that made me read the entire book in one sitting.

I’ve never met Jackson, but in 2010 he included my short story “Meatland” in a terrific anthology he edited, Topograph: New Writing from the Carolinas – And the Landscape Beyond (Novello Festival Press). He answered a few questions from his home in Charlotte via email in late July and early August.

Andrew Ervin: I hate this question, sorry, but it’s one that I’ve been thinking a lot about since I started reading Vollmann years ago. It came up again recently while reading Sheila Heti’s How Should a Person Be? and Kyle Minor’s forthcoming story collection Praying Drunk. Can you please explain the relationship between the “Jeff Jackson” described in this novel and the construction you think of yourself as.

Jeff Jackson: The most fundamental distinction – but one that isn’t made often enough – is that one Jeff is flesh-and-blood and the other is made up entirely of words. Really, we’re not even the same species! Also, this is a novel and not a memoir. The character Jeff shares some of my biography while other aspects were partly or wholly invented, or borrowed from friends and acquaintances. I’m wary about going into too many specifics because it’s ultimately beside the point. Hopefully the novel is convincing on its own terms, even when you encounter something extreme like, say, burning a strangled corpse on a pyre in the woods. Overall, I was less concerned about the character sharing my literal experiences than making sure there was an emotional honesty underlying everything. Originally, I didn’t even want to call the protagonist Jeff. But as the novel evolved, I came to know the character so well that he earned the right to my name.

AE: What was the most difficult part of writing Mira Corpora? Was your background in drama useful? Was it an impediment?

JJ: The hardest part was finding the right structure. I went through countless drafts and even created an entirely separate version of the novel – there was a steep learning curve. Basically, I was too ambitious about how many things the novel could accomplish at once. I ended up cutting over 100 pages of polished material and radically rearranged the rest. For instance, the last chapter of the novel was originally the book’s opening.

My drama background was helpful because I was used to a long gestation process. We often create plays over several years of intensive rehearsal and I’ve picked up tricks for working through seeming dead-ends. I trusted that eventually I’d find the right form for this story. However, my theater experience also led me to expect the material would intuitively shape itself more than it did. Somehow I managed to forget how the physical presence of the actors plays an important role in making fragmented material and tonal shifts cohere for an audience. Of course you don’t have that in fiction, so I had to find other ways to make that happen and be more intentional about streamlining everything.

AE: Speaking of theater, what makes Wallace Shawn so fucking great? How has his work affected your own?

JJ: Oh man, it’ll be a total pleasure to answer that! I could writes pages about the Godlike Genius of Wallace Shawn! It always amazes me that one of America’s greatest writers is still best known for his role in The Princess Bride. Most people picture Shawn as this avuncular homunculus and approach his plays like they’re popping a cork from a champagne bottle when really they’re pulling a pin from a grenade. I love how his work tackles extreme material in sophisticated ways. It’s simultaneously wildly imaginative, morally challenging, and bare-knuckled in terms of its impact. And politically, his plays shred the well-heeled liberal ideas that so many people (like me) often take for granted and expose the well-meaning hypocrisy behind them.

I admire how each play takes fresh risks and his latest, Grasses of a Thousand Colors, is his most startling yet. It’s a truly visionary work that mixes dystopian nightmare, anthropomorphic fairy tale, and sexual fantasia – and that description hardly does justice to both its strangeness and haunting familiarity. I’ve always been fascinated by the innovative way Shawn structures his material – unusual gambits like the blistering barrage of obscenity that opens Marie and Bruce and the endless party scenes that comprise most of that play. But the biggest inspiration has been how he trusts his audiences to register the nuances of his highly-charged material and to navigate the ambiguity of his complicated texts. His best work grants audiences the maximum freedom of interpretation – something I’ve strived to do with Mira Corpora.

AE: Are you suggesting that there’s political commentary at work in Mira Corpora?

JJ: You may be sorry you asked! I’ll just need to get my tinfoil hat properly situated to answer this one. People like to say “the personal is political” and I’m starting to think that prose style is political, too. So much commercial and even literary fiction works hard to fill in details for the reader and stage manage their experience of the story. So-called good prose is engineered to ensure you glide effortlessly over its surface without significant disruption. It’s part of a trend of passive consumption throughout the culture. Our critical skills are eroding and we need them more than ever in this era of information overload, nonstop marketing, and political doublespeak. 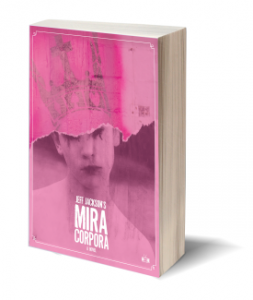 I believe readers should have to actively forge their own interpretations. Maybe this used to be the norm, but over the past decade I’ve seen how writing that takes away readers’ signposts is often marginalized as “experimental.” Literature is falling prey to the phenomenon Mark Fisher calls “Capitalist Realism.” He argues the atmosphere of the marketplace has become so pervasive that artists unconsciously curtail their imaginations to conform to what they expect will sell. Our language should strive to resist these forces. William S. Burroughs was more aware of this than most political writers – he employed his cut-ups because he saw language itself as a control mechanism that needed to be disrupted.

This might sound like I’m in favor of fiction that’s stern and self-serious, but it’s the opposite. I worked hard to make Mira Corpora enjoyable, imaginative, and unpredictable – it’s just that navigating the dislocations and ambiguities are a key part of its pleasures.

AE: Turning to another medium, who would be the perfect filmmaker to direct a cinematic adaptation?

JJ: I’m a huge cinephile – I’ve been known to blow off work and family to catch screenings of rare Rivette and Suzuki films – so this should be a tough question. But in my fantasies, there’s only one filmmaker for Mira Corpora: Harmony Korine. I’ve been a fan of his work since I saw Gummo during its opening week. He’s peerless at creating moments that are funny, disgusting, terrifying, tender, and incredibly beautiful all at once – without wrapping them in some moral or simplifying their confusion. There’s a lyricism to his work that isn’t like anybody else. Prose style is somewhat analogous to cinematography in my mind and I thought a lot about Harmony’s visual aesthetic while I was writing Mira Corpora. He’s artful without being precious, without calling attention to his techniques. I’m pretty sure Spring Breakers has vaulted him well beyond my book, but I can always dream.

AE: In a blurb, Don DeLillo said of Mira Corpora, “I hope the book finds the serious readers who are out there waiting for this kind of fiction to hit them in the face.” In practical terms, are there any substantial—or transubstantial—distinctions between a divine benediction and a glowing blurb from Don DeLillo?

JJ: Not as far as I’m concerned! When a handwritten note from him appeared in my mailbox, I had to walk around the block a few times until it started to feel real. I was lucky to discover DeLillo’s fiction when I was young – starting with The Names which blew my mind – and I’ve read everything he’s written. I get more out of one of his lesser books than a so-called masterpiece by someone like John Updike. For the penetrating scope of his vision and chiseled power of his prose, he’s a sort of gold standard. Being older and toiling away with little encouragement, I always took inspiration from the fact that DeLillo got published later in life and was skeptical anything would come of his work. His praise is also special because he’s basically stopping giving blurbs. I really appreciate that he’s been kind enough to let me use his words to promote the novel. The fact that I’ve received praise from both him and Dennis Cooper – another favorite writer – well, damn, it’s one of those things I wish I could relay to my younger self during those periods when I stopped writing for months at a stretch and seriously considered tossing my computer off a bridge.

Andrew Ervin is the author of a collection of novellas, Extraordinary Renditions. He lives in Philadelphia.