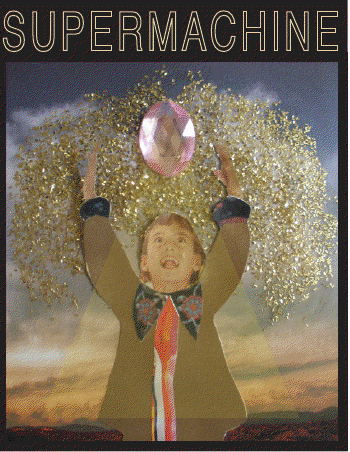 Meet Ben Fama, one of the two individuals behind Wonder, a new publishing and fine arts endeavor in Brooklyn. I first met Fama a few years back at AWP, as we were tabling our poetry wares. His was Supermachine, a strikingly well- designed poetry journal and chapbook press he formed in 2008. Since then, he has moved into a more heterogenous mixture of art and poetry.

Fama stimulates my brain in a wonderful way; he has made me augment my viewpoints on how I engage with poetry, with language, and with the general clusterfuck of popular culture. His new project is Mall Witch (which you can discover and help fund here), a combination of an experimental gallery installation in New York and a printed book of Fama’s own work, amongst others.

It’s great getting an interview down in writing with Fama, although the conversation could have gone on forever. Since we’ve known each other, we’ve shared a number of intriguing debates about poetry, publishing and popular culture, but they’ve been amongst a sea of people and events. It was nice getting cozy with Ben Fama one-on-one. I recommend you do it too.

Drew Swenhaugen: I first became acquainted with you through your journal Supermachine. You ran a reading series in Brooklyn, published a biannual print journal of really great poetry, and began to publish chapbooks. But then you stopped, which bummed me out a little. What was it with that publishing model that you grew tired with? Why did you choose to quit while you had a decent amount of momentum in the poetry community?

Ben Fama: I loved doing Supermachine. Everything about it was rewarding to me, so it was a melancholy day to have to put it to bed. It’s not so much that I became tired with the publishing model—releasing chapbooks alongside a biannual journal—well it’s a pretty typical model, and for all the work it can be successful. Ending Supermachine was a necessary step for me to pursue my interests in other forms of art. Poetry journals are great for catching up on who is doing what, from high to low, mfa to slam, but in general you do start to see the same types of poems again and again. With Wonder, I will be working with the writers and artists I feel the deepest affinities for. After Mall Witch we will publish The Fashion Issue by Kate Durbin.

DS: The description on Kickstarter referred to Mall Witch as “existing between accessible and inaccessible modes of display and performance.” What makes a mode of art inaccessible? Isn’t the internet, in a way, allowing complete access? Or do I have it all wrong?

BF: The curator of the Mall Witch gallery show, Johnny Sagan, wrote this description, and I believe he’s referring to the goal of his overall project. Simply described, he sets up pop-up gallery shows with specifically curated performances each night. After one of our early meetings about Mall Witch, Johnny sent the Wonder team a quote from Christian Schick that he thought exemplified his desire to create a space that entered “fangirl/fanboyism, the Male Gaze, the Object of Desire, the Model of Aspiration…the worship of the idealized Celebrity Brand.” He wants to recreate these occurrences in the gallery and let people step into so called “tumblr-delic” spaces. Johnny also obsessively talks about creating digital media around physical cultural items (like designer t-shirts) which, by it’s very immaterial as digital matter, is accessible to everyone. I could speculate more but again your question was about Johnny’s gallery philosophy and I don’t want to misrepresent him.

DS: So your next endeavor is Wonder. Can you tell us a little more about it? And Mall Witch. What’s going on with all of that?

BF: Wonder publishes artists books, ephemera, pamphlets, and glossies. It is myself and Andrew Durbin. Our first artifact was released at Crush Party in May. The idea of Crush Party was people could anonymously email in the name of their crush. We would put it online and then hopefully the crush would attend the party and they would meet. The pamphlet we made for that was called This Will End In Tears. 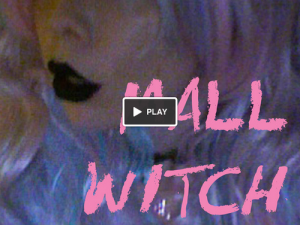 Mall Witch is poetry manuscript wrapped up in an art book. It is also an internet playground in print. We had the good fortune to be solicited by Johnny Sagan (operating under his roving curator name Snowy Wilderness) for a gallery show that will also be called Mall Witch. It’s happening around Halloween. When soliciting artists for the show, we’ve cited the internet, Tumblr, Tavi Gevinson, love, simulation, drag queens, Baudrillard, internet celebrity, Mykki Blanco, pixelation, Second Life, and also life itself.

DS: You’re a published poet. What is it that is making you focus on art and/or poetry that isn’t necessarily on the printed page? Do you think this is a growing movement within the literary world?

BF: I was bored. And the other so called fine-arts seem to be having lots of fun. A lot of Poetry seems to want to sequester itself off to this position that sits in a comfy chair reading quietly by the fire as snow falls outside onto the limbs of pines. That can be wonderfully divine, like xanax, but it’s not the intention within the genre I personally want to pursue. Marjorie Perloffrecentlydescribes “a certain kind of prize-winning, ‘well-crafted’” poem—a poem that the New Yorker would see fit to print and that would help its author get one of the “good jobs.” Matvei Yankelevich, who helped me out intensely when I moved to New York so many years ago,didagoodjobof detailing a more accurate version of what’s happening now in these liminal zones where writers experience a “simultaneous rise in both academic and “art world” contexts, and their popularity among serious or experimental poetry readers.” It’s this I’m most interested in, and it’s what has brought me to create Wonder and Mall Witch.

DS: I’m loving the Yankelevich – Perloff conversation. The debate is an important one, and you are contributing to it. As a poet (me) that doesn’t believe that poetry is a fire-side quiet time, can we talk about form? Form in poetry, as much as it is dynamic and needs to evolve constantly, is a powerful thing. The form of the sonnet holds in it a strong emotional and psychological load. I also completely understand how people get bored of it all. But won’t the internet, wont Tumblr just fall into the category of a boring art media? Especially when attention spans are so short. It’s a battle for relevancy, is it not? 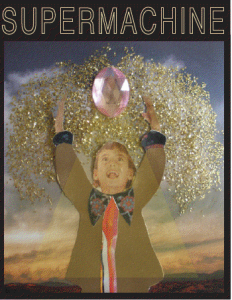 BF: If people are boring, their work, their tumblr, their dog name, their comments on facebook etc, will be boring. You’re right, eventually Tumblr, which describes itself as a social network with a blog platform built in, will become irrelevant, but what we are seeing on there right now from the most interesting personalities is revolutionary.

DS: Who are your predecessors? Whom are you getting your inspiration from?

BF: The digital, simulated world, which is slowly infecting all of culture, is a big source of excitement for me. I recently visited Tumblr headquarters, and it was clear they are sort of oblivious to the avant garde functions their platform is providing people as to these zones of occurrence that are also manifesting IRL. I was asking them about about popular content, which types of posts get the most engagement, and almost half of the total posts were images. They even said that if you post text that you should include an image as a header. I think the way people are using Tumblr is truly “next level.” You could spend hours there as you would walking around a museum.

For all my love of the Internet, social media, and various other things like Instagram, when I’m sort of in a mood for a real printed page experience I like to go to the bookstore Printed Matter in Chelsea. It’s an art book store that does events, and sometimes they have live performances and book releases. The stuff they have there is just insane and I always coming out feeling like there is a lot that can still be done, even in black and white without a lot of design competence. Also I recently visited Ooga Booga in Los Angeles for the first time, which is a similar store selling art books and small run publications. I can’t get enough of this stuff. I am still making real books out of paper and I am glad to have these places that teach me that if you care for, understand and truly love your aesthetic than other people will too.

DS: To me, there’s a glam aspect to a lot of the new work you’re doing. Or a fascination with pop culture. Can you build on this a little?

BF: Certain things just need to be seen in order to be experienced. I’ve written about Brian Eno before, and he is someone who moves from Glam to Zen modes within his career (sometimes on the same album). I used to listen to Music for Airports every morning. I’ve learned a lot from Brian Eno that I’ve applied to my own writing practice. There is the whole glam-rock thing that anchors the other side of his career, and he’s playing on the superficial. As far as less artful version of this, I am interested in what’s popular so long as it is allegorical. It’s bizarre to even think of a time when there was a gap between high/low, or even the “meaningful” and the frivolous. Think of how Kim Kardashian’s celebrity status is basically an end in itself. We’re talking about someone who basically rose to fame just for hanging out with higher profile celebrities like Paris Hilton and then had a sex tape released. I mean come one … she’s chewing gum throughout this sex tape. The superficiality of it is completely obvious to everyone, and yet we still want to consume her. That human desire wants this in particular is what interests me.

DS: What about that human desire resonates in art, in poetry, or in Wonder?

BF: DREW I CAN’T ANSWER THAT IN A PARAGRAPH! Can we delete this one?

DS: It’s such a good one though! I want to round off the interview with a good final question.

An Interview with Lucy Corin