“This book means a lot to me, I want you to have it,” my mother said, handing me a small, beige paperback. It was a slender volume, on its cover a picture of a gauzy, beach; a frothy lip of surf curled back to reveal a group of perfect shells nestled together in the wet sand beside the title, Gift from the Sea. “I offer it to you, I guess, as a kind of explanation.” I took the book from my tall, square-shouldered mother and went back to packing my trunk. I was leaving for boarding school in the morning. It was 1978 and I was fourteen years old. 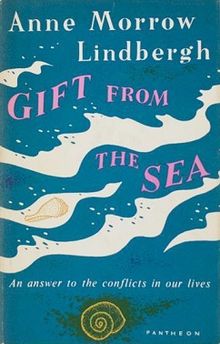 My mother was a deep reader and a gifted writer with a sense of occasion. One of her parenting tropes was pairing perfect reading material to big life events. For example, when I got my first period she bought me the Complete Poems of Anne Sexton so she could read aloud to me “My Stringbean, My Darling, My Little Girl” in our family therapy session. We were there to parse my parents’ messy divorce and my even messier reaction to it, but unfortunately, the therapy didn’t work. My parents continued to feud and I became more angry and unruly, until finally Mom drew the line and found a prep school willing to admit a girl with bad grades in late August. I took the book from my mother and packed it in my trunk with my Snoopy doll.

In the early 1950s, Anne Morrow Lindbergh spent two weeks alone on Captiva Island in the Gulf of Mexico beach-combing and writing. She used the seashells she found there as metaphors to parse themes of marriage, motherhood, love, and solitude. The book was a huge bestseller and, in many ways, the harbinger of the self-help/inspirational tidal wave of publishing that was to come. Without it, Oprah Winfrey might still be anchoring local news and chicken soup would only be for colds. By the time the 20th Anniversary edition was published in 1975 we were living in an I’m Ok, You’re Ok world and my mother was merely executing the mandate of the “Me Generation” by getting me out from under her Espadrilles.

I read the book studiously in my dorm room between classes, underlining passages and taking notes, trying to pass this test, to do something or be someone that would make my mother want me back. Instead, I found a call to aproned, girdled, put-upon hausfraus to slow down, throw on a pashmina, take a walk on the beach and find simplicity, solitude, and gentle caring for their own souls. It’s not Lindbergh’s fault I didn’t connect with her book. I was simply too young for it. What could I have known about the conflicts between marriage, motherhood, and selfhood? I didn’t even have a fully formed sense of self to lose yet. In the margin I wrote, “Observing the day like a shell.” It’s a writerly note; I understood metaphor, but not the workings of my mother’s complicated heart. Reading and annotating that book was my final, fruitless act of loyalty as her daughter. The following three decades were ones of estrangement between us.

I grew up and made an adult life without her—but oddly, one that looked almost exactly like hers: two daughters, a faltering marriage, a fledgling writing career. I was forty-six and falling apart— a Gen X Lindbergh—when I fled my family to take refuge on an island in Puget Sound to write and reflect in solitude.

I left the slog of domestic life to reclaim myself in the form of memoir. I threw my yearbooks, notes, and letters into a duffel bag, and as an afterthought, I tossed in the very copy of Gift from the Sea that my mother had given me thirty-two years before.

I took up my residency in an idyllic little cottage down the road from the romantically-named Useless Bay for three whole weeks. I anticipated dazzling creative productivity. But when I got there I was seized with paralyzing fear and found myself unable to write a word. So instead I re-read Gift from the Sea. I read it in a few hours, crabbed up on the window seat of my cottage. It made a lot more sense to me now, but there was something in it that felt deeply threatening. When I was done I was stirred up and stormy. I decided to head out to the beach for some fresh air.

Puget Sound is no Gulf of Mexico. The beach debris isn’t the quaint sea-drift of Lindbergh’s tropical Captiva Island with its adorable channeled whelks, moon shells and argonauts. All the gallimaufry of the Pacific gets shoved down the gullet of the Straight of Juan de Fuca, which pukes it into Puget Sound which then horks all that gack up onto the sands of Useless Bay. The shoreline was a riot of driftwood tangled up in seaweed and fishing line. The sand was studded with broken sand dollars, razor mussel shells and shining scales of still-jagged beach glass. The tide recoiled from the shore, leaving a pamet of wet, rippled sand and shallow tide pools that glistened in the weak afternoon sun.

I took off my shoes and socks and rolled up my jeans. It was early March and I was bundled up against the snap of the wind. My feet looked pale as mollusks as I waded into the tide pools, remembering how I would wade behind my mother on Cape Cod, digging for fiddler crabs — “fidderwidders”—to put in my red bucket. Looking for beach treasure was my mother’s fondest joy. I never felt closer to her than when she was showing me something beautiful and glistening in the palm of her hand. 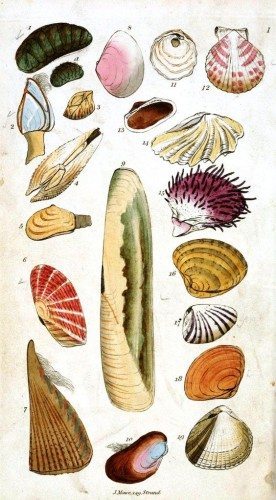 The psychic clouds gathered. Wanting to channel my inner Lindbergh, I picked up a nondescript white shell that looked like a toenail and tried to find an inspirational metaphor for my life, but when I looked inside myself all I saw was a gyre of garbage. I tossed the shell aside.

Further down the shore I came upon a massive ship’s door that had washed up from some far-away foundering. I hopped up on it and my weight didn’t even budge it. Only something as soft and terrible as the tide could have lifted it and dropped it here.

From my perch I saw a woman with a dog come down the beach, the lab’s tail spiraling with joy, a salty stick in its mouth. Another beach-comber stopped and said, “Beautiful dog,” giving the dog a pat. The woman said, “She’s a good girl,” and they went their separate ways. But those words—she’s a good girl— hung in the air and shucked something deep inside of me. I let out a yelp of pain and suddenly I was sobbing, deep, wracking sobs that hurt my chest and stopped my breath. I had been holding back an ocean of tears for thirty years. I didn’t know it then, but it would take me seven years to weep them all out.

I walked in the dark back to my cottage. I was thinking about Lindbergh again, wishing I hadn’t picked up that book. I let myself in the door, switched on the light and picked up the book. It opened to a random page where a lonely, lost girl had once underlined in purple pen: We are all, in the last analysis, alone. And this basic state of solitude is not something we have any choice about.”

This was the rancid sea slug at the center of Lindbergh’s beautiful, whorled book: this idea that somehow separation, an embrace of solitude, is the path toward joy. For me, it was the source of my life’s greatest anguish. Gift from the Sea gave best-selling bonafides to my mother’s notion that she was an island, an island too small for the two of us. Thanks to this goddamn book, I had been cast away.

I left the Island to go home to my family, but I had changed, and I began dismantling my life. Seven years later, I was divorced and living with my daughters when my mother called to tell me she had cancer and not long to live. I reeled her in from her island in New York to come die in my home in Los Angeles. In the three months we had together, I came to see that she and I were both castaways, her mother had been an island as well. Her solitude was an adaption, and Gift from the Sea was a literary benediction for a hurt so deep she could never admit it was there, even as she passed it on to me. As soon as I understood that, I forgave us both.

On her deathbed my mother looked at me and said, “I never should have sent you away.” It was all I ever wanted to hear, even though in many ways it was too little, too late. I used that lifeline to hoist myself back on her shore, gasping for air. I put as much of myself on the margin of her mattress as I could without hurting her now fragile body. “Mommy, all I ever wanted was you,” I said, laying my ear against the shell of her breastbone, listening to the tide go out.

Erika Schickel is the author of the 2007 essay collection, You’re Not the Boss of Me: Adventures of a Modern Mom. Her essays and reporting have appeared in the Los Angeles Times, the LA Weekly, LA Observed, the Los Angeles Review of Books, Salon, Anthem Journal and several anthologies. She is currently finishing her second book, a memoir called The Big Hurt. She lives and teaches writing in Los Angeles.