Plagued by doubt, I pick at my prose, searching for answers. If I keep scratching, the text will bleed. I stop writing. Though the novel is nearly done, a crucial element is missing and I am uncertain how to proceed.

In the story, a young German named Heinrich arrives in the village of Pangnirtung, on Baffin Island. The year is 1980. He sets off on a two-week hike but when he returns to Pangnirtung time has raced forward. 2010 the calendar insists. For reasons unknown to him, he has been yanked from the twentieth century and deposited in the twenty-first.

To prevent myself from physically or otherwise destroying the manuscript, I decide to send Heinrich traveling in fragments, away from me. The novel tells Heinrich’s life through pieced-together scraps of narrative evidence: journal entries and extracts from books on animals; it includes Inuit tales, in which a person’s soul may pass through many lives, inhabiting first a raven, then a seal; it depicts how a young man is torn from the era of handwritten letters and thrust into an image-saturated age of pixels. Given all this, why not toss the manuscript of Heinrich, atomized and joined to an array of photos and paintings, on a voyage across actual continents, through “real” time, at the mercy of snail-mail? I experience an intense desire to copy the novel onto the backs of postcards, then drop it, bit by bit, into the machinery of the Canada Post. Today, so many narratives bypass the bound pages of books, migrating rather through fiber-optic cables from creator to consumer, what better way, in such a shape-shifting era, for a novel to travel from author to reader than by postcard? For the duration of my experiment, Heinrich will escape my destructive grasp; a number of my friends will receive something besides a bill in the mail; they will be reacquainted with the frustration of deciphering sloppy handwriting; and I may discover the novel’s missing element. 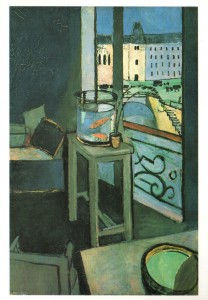 I gather postcards into a small mound, select one, and begin transcribing. A single, double-spaced, printed page of the manuscript becomes four handwritten postcards. I press on. Each picture adds a layer of meaning. Not just any postcard will do. Every picture must comment on the text. Oblique or overt, a connection has to nestle within each pairing of image and prose. 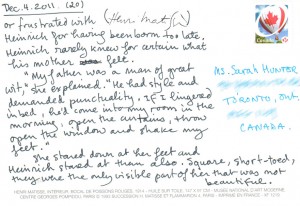 Postcard # 20. I’ve completed a sufficient number to start mailing them. Excited by the prospect of their imminent journey, yet regretful at having to part with them, I hesitate. The act of mailing them feels final; I sense that I have no right to ask that the postcards be returned to me. I may never see them again. I am giving them away. Why not scan them first and create a digital archive? I don’t own a scanner and lack the skill to create such an archive, but I do have a friend who is both computer savvy and generous. 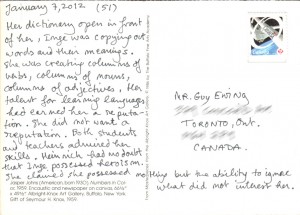 Postcard #51. Over fifty postcards have been scanned and archived by my dear friend, who is either crazy or has not yet realized the proportions this project may take on–that we are creating a creature with tentacles. I am seated across from a friend in a bar, holding up a postcard, excitedly reading aloud. My listener remarks that hearing the words while looking at the front of the postcard allows his mind to move more fluidly between picture and text. Aha. What if postcard recipients were willing to record themselves reading, and these audio files were added to the archive? The result would be a handwritten-illustrated-e-audio-book that could be navigated by a variety of routes. Rather than read from beginning to end, visitors could enter the novel through any picture that intrigues them, advance through a story being read aloud by an eclectic vocal collective of fellow readers. How differently a text inhabits each reader would become audio-palpable. If a visitor chose not to enter through a picture, not to advance card by card, but rather to search the archive by recipient’s name, such a visitor could experience an auditory “core sample” of the novel—a layered reading in one voice of passages taken from many separates points in the narrative, a delicate drilling through the story. 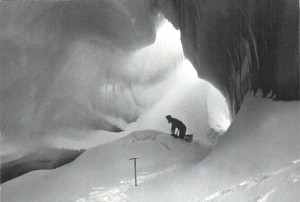 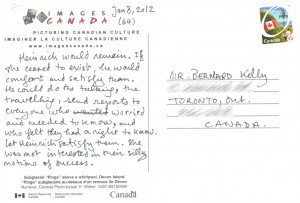 Postcard # 64. My supply of postcards is diminishing. From the AGO I’ve bought crisp new ones, and in a used-books store, where the vintage postcards are arranged by theme and fill several shoe boxes perched on a shelf at the back, I’ve spent more money than I intended. I put out a call for donations and soon am inundated: souvenir images of the Freud Museum in London, England; Star Trek; Ikea; Disney Land; a New Brunswick amateur taxidermist who stuffs squirrels and dresses them in costumes. The possibilities multiply. Will such random cards successfully illuminate the novel? I go on-line, searching for specific images: snapshots taken of Tettnang, Heinrich Schlögel’s hometown near Lake Constance. Vacationers have posted holiday photos. I contact several to ask permission to reproduce their shots of the town square, of the hops fields and orchards surrounding the town. A number of my own quick shots, taken on a two-week hike in Auyuittuq Park on Baffin Island become postcards. I e-mail the National Archive of Canada, which grants me permission to reproduce, for use in an art project, a selection of photos taken on Baffin Island in the twenties and fifties; most of these are portraits of unidentified, de-named, Inuit men, women, and children.

In a shoe box containing photos and letters that once belonged to my father, I come across postcards of the Rhine, purchased by him at the age of twenty-two—a Canadian cycling through Germany in 1937, his adventure the reverse of Heinrich’s. I ask my friend and collaborator to make a copy of one of my father’s postcards, and on the back of this I transcribe a passage, describing Heinrich’s hike along Baffin Island’s Weasel River. When he bought the Rhine postcards, my father did not know that in two years’ time he’d be abandoning graduate school to fight in a war against Germany. While Canadians oversees fought fascism, back in Canada aboriginal children were being forcibly taken from their parents and placed in residential schools. How many stories can one archive tell? How many can it hide? 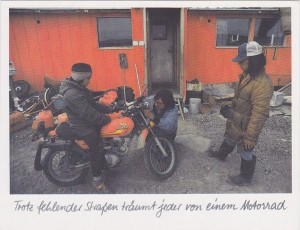 I have handed over postcard #259 to the Canada Post, in whom I must place my trust. I have abandoned the notion I had at the start of asking for the cards to be returned, of rearranging the order of the novel according to the dates that postcards were received. To listen to so many voices of postcard recipients reading will make sufficiently clear that the text has traveled, that the novel has left its author and now lives elsewhere. I cycle around the city, making recording “house calls” with my laptop, while more tech-confident postcard receivers read into their iPhones and send me their files. Clusters of recordings land in my inbox. Sometimes, the passage being brought to life by an expressive voice is one I’ve deleted from the novel. I listen carefully, wondering if I ought to reinstate the words. A guitarist rents studio time and records himself reading while playing. His generosity amazes me. A poem is written in response to a postcard, then another poem. Photos are sent to me of dresser drawers, shelves, china bowls, desktops, and cabinets where passages from my novel are being kept safe. Safe from me?

I have now woven an archivist’s voice into the novel. I have done so while the manuscript wandered in bits and pieces across Canada and Europe. Is her voice, the archivist’s, perhaps the missing element?

A composer is translating the novel into ten minutes of music. He has selected piano (for Germany), also cello, clarinet, and percussion. He has divided the novel into five sections. “The first expresses yearning, a young man ready to leave Tettnang,” he tells me. “Toronto will be a grid, played to the rhythm of pursuit, someone escaping on foot, walking not running.” My novel and Nic Gotham’s music will soon become inseparable for me. 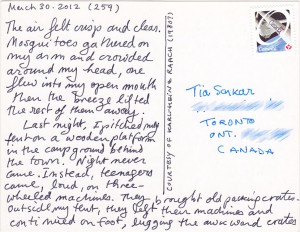 Passages of the novel now “belong” to the voices of readers. The text hovers, mobile, yet archived; it resides in a noncommercial space, collectively cradled, while I continue to search for answers. The number of receivers now surpasses seventy. Possibly the novel needn’t ever be published as a book, and I’ll be spared the trauma of completion, of fixity? Ours is an era of chaotic possibility. Yet we crave cohesion. Isn’t the role of fiction to provide structure? The duty of the storyteller to lure unsettled experience into a polished form, to hold the pieces steady until they break free once more? The bound and silent book waits to be read. The archive of passages uttered from mouths ignorant of context, deprived of what precedes and follows, is a place of friction, alive to myriad interpretation. Between these two locations Heinrich travels back and forth.

The Schlögel Archive is open to the public. It is located at www.schlogel.ca. The novel, The Search for Heinrich Schlögel, is being published in September 2014 by Tin House Books in the United States and by Pedlar Press in Canada.

Martha Baillie is the author of four novels and has been published in Canada, Germany, and Hungary. Her poems have appeared frequently in journals such as Descant, Prairie Fire, and the Antigonish Review. Her nonfiction piece “The Legacy of Joseph Wagenbach” was published by Brick: a literary journal. Her most recent novel, The Incident Report, was a Globe and Mail Best Book and was long-listed for the Giller Prize. She lives in Toronto.

In Praise of the Interweaver: An Essay