Fluid was the enemy of our house.
Always on guard my mother studied her
ankles & hands all the time. Any swelling
set off alarms. Everything in our house
bolted to wet silence. Our family
could be capsized should the fluid
breach her heart. More than once
it did. Surrounded her heart
with gold liquid. Attacked her
heart with its rising flood.
I hated the smell & arrogance
of it. The way it misshaped
my mother’s lovely muscles.
I never understood how
the body made so much of it.
She would pull fluid off her body.
Worried for the kidney
she had received from a murdered child.
Worried that the fluid would pull her
under the hull of her own organs.
Liters & milliliters placed us
on the brink. For years after she died
I lived along a gold, slow edge
of Maybe or Maybe Not. I kept asking:
Could I have ever saved her sinking vessel?
I only mean that some days I was certain
there was nothing left after she died
that could fill the hollows in me. I wanted to know
how I could drown my Ishmael
of memory. Pull my life out of my mother’s
mute grave. Nothing to surround my heart,
which turned & kicked like something
orphaned in its cradle. I got so sick in January
my doctors ordered multiple blood transfusions.
My blood was going bad, giving up its own air.
Yet I refused. I had given so much of
my blood to my mother’s absence
I could barely stand to give myself
the anchor of blood that might pull me
above the waves, above those lost years I drifted
like an empty bottle upon the tide. 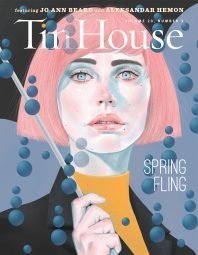 Rachel Eliza Griffiths is an artist who lives in New York. Her recent collection of poetry is Lighting the Shadow.