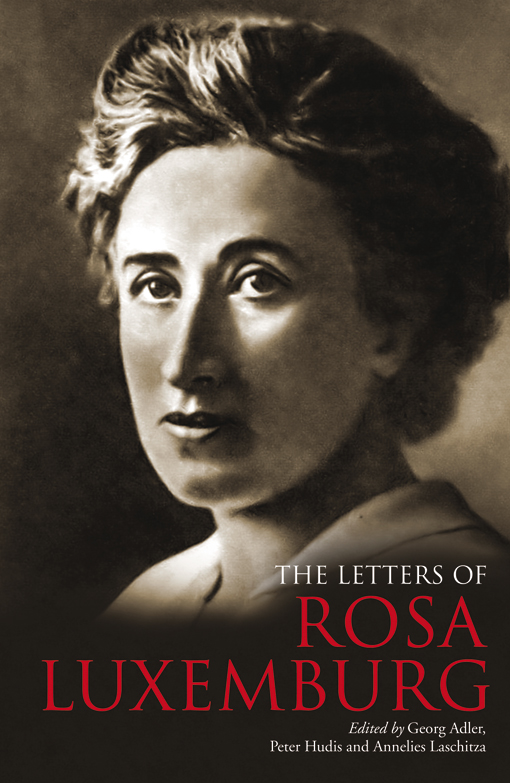 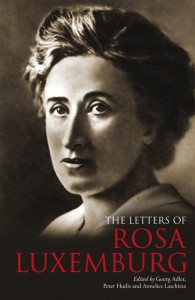 When considering Rosa Luxemburg’s Letters from Prison, William Stafford’s words ring in my head: “Ask me if whether/ what I have done is my life.” His words imply that if one must ask that question, a life cannot be entirely defined by narrative action. In remembering the life of a political activist like Rosa Luxemburg, these words redefine what we mean by life. Often the narrative of activists is steered toward historical accomplishments, major political writings, and especially in the case of Luxemburg, untimely death. Her life ended abruptly 95 years ago, and since then she has been sequestered to the reading lists of political science classes and subversive economics, Occupy Wall Street flyers, and the internet-immortality of the meme. This collection of her letters stretches the definition of her life; it shows her confined and censored, yet part of her identity expands to take the place of the words she was forbidden to speak.

What I knew of Luxemburg was originally the exclamation mark-ridden quotes and her red-martyr status. That is, until I found a tattered, hand bound copy of Letters from Prison in the University of Montana library where I worked in the stacks. I still remember where the copy stood at the top of a shelf with a binding so slim that there was no writing on its jacket at all. I had to take the book off the shelf and finger its first pages to know what it was. I don’t know why I did not just pass right by the book. I was at risk of censure or even losing my job if I was caught reading again. But perhaps it was the anonymity of its cover that drew me to open the book’s pages.

Letters from Prison is a short volume of Rosa Luxemburg’s letters to Sophie Liebknecht. Sophie Liebknecht was the wife of Luxemburg’s comrade and friend Karl Liebknecht. While reading, we are keenly aware that Sophie is the wife of the man with whom Rosa Luxemburg would be murdered on the night of January 15th, 1919. But these pages begin four years before their deaths while Luxemburg was imprisoned initially for a speech against World War I military abuses. The following two years she was imprisoned on the basis of “preventative detention.”

However, injustice, politics and bitterness are absent from these pages. Perhaps because of the censors the letters had to pass through and for the addressee’s protection or interest, these writings contain no biographical action or ideological sound bites. What Luxemburg writes of is birdsong, identifying tree species, the change of seasons, loving concern for Sophie Liebknecht, dying insects, her hunger for poetry, and the small garden at the prison, which sounds like it may have just been a pathway. She writes of the “…narrow, paved path along the wall, where I have paced to and fro for nearly nine months now, so that I know every stone and all the weeds that grow in the crevices of the paving. I like the motley colouring of these stones, reddish and bluish, gray and green.” This passage shows her will to attend to even the smallest weed, to the stirring of nature as it changes forms, and to know even the most limited of places. Luxemburg’s confinement sharpened her microscope-eyes. And what can be understood of her in these pages is how bravely and closely Rosa Luxemburg observed the small space of her prison. Like Dickinson’s reclusion, Luxemburg’s letters show confinement as an opening up of the world. Because she could not look outside the walls, she found a world within.

What I’ve found in Rosa Luxemburg and Letters from Prison, I had not found before in any kind of revolutionary discourse. I can only speak from my own experience of working in social justice and climate justice: I knew we needed to change the world, and I knew what was wrong with the world, but I did not know the world itself. Perhaps it was the rigidity of ideology in the groups I worked in, but I felt such a riptide for the cause that paying careful attention fell away. Then I read Luxemburg’s plea to Sophie, “Do go to the Botanical Gardens, Sonichka, towards noon when the sun is shining brightly, and let me know all you can hear. Over and above the issue of the battle of Cambrai, this really seems to me the most important thing in the world.” To hear this activist martyr give precedence to a garden over a pressing political event shocked my understanding of what it meant to engage. As a strong opponent of the war, she does not undermine this battle’s importance. She simply magnifies the significance of one garden’s passage into spring.  Luxemburg demonstrated in these letters that you need to really see the world before you demand that it change.

Letters from Prison was written without Luxemburg’s knowledge that the letters would be published. In fact, it is barely published now in English. The University of California Libraries printed a limited edition ridden with errors. Yet the collection reveals an aspect of activism that I had always longed for. When asking for change, it is somehow difficult to be present in the “now.” What Luxemburg writes of in this collection is how much she loves the world, and how closely she is willing to look at it. She achieved presence in these pages, enough to smear herself upon them outside of her political self. In response to the return of the blue tit, a bird she had missed over winter, she writes, “for the bird shrilled thrice in brief succession ‘zeezeebey, zeezeebey, zeezeebey,’ and then all was still. It went out of my heart, for there was so much conveyed by this hasty call from the distance—a whole history of bird life.” Though we may never get the whole history of a life, this collection of letters gives us more to search from. It is a hasty call from the distance, reminding us of presence, even with the dead, even with the world as it is.

Laura Christina Dunn is a graduate of the MFA program at the University of Montana, and her her work has appeared in journals such as At Length, Fugue, The Bear Deluxe, Zocalo Public Square and Alligator Juniper, among others.  Her poetry manuscript was a finalist in AROHO’s To the Lighthouse First Book Contest. She has been a composer, writer and collaborator on folk operas produced by RadyBloom and ArtParty Theater company in New York City, including Live! Mermaids! Live!, The Orange Person, and The Snow Queen. She currently lives in Portland, Oregon where she teaches at Pioneer Pacific College.