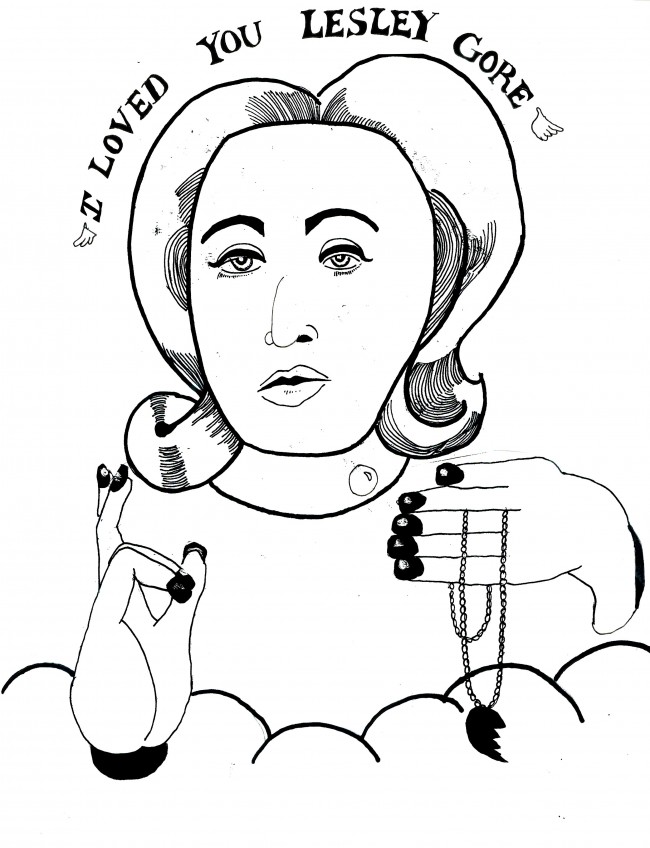 Lesley Gore has a good voice, my grandpa said. Shame about her face, though.

Where did I get the idea that things were better back then? Probably from my Pappy. The joke about old people goes that they don’t know how to program the VCR and can’t ever learn but Pappy loved videos, video stores, rewinding credits to see who played Lana Gondolier or who did her makeup. Who cares, that’s what I think. One time we watched a movie and it didn’t even have credits, that’s how long ago it was made.

One time we rented a concert movie from the ‘60s: early black-and-white ‘60s not Woodstock ‘60s. I always worried Pappy would say something racist but all he said was how long it takes black women to do their hair, and how all the black guys started playing music in prison. Which, for Pappy, is pretty good: he didn’t say anything about Smokey Robinson being mixed race, which surprised me. In fact he liked the movie okay, and you can tell because he’ll tell you everything about it, down to the aspect ratio. Then he complained how no one plays guitar that well anymore, how no one sings that well, and sometimes I thought he might be right. He was right maybe half the time, the other half the time he was racist or mad.

After Marvin Gaye came Lesley Gore, who sings, “It’s My Party.” Pappy said, she must be pretty good to follow Marvin Gaye. Then he pointed out that Lesley Gore is not conventionally attractive. First, she is overweight, maybe fatter than me. Second, her clothes do not flatter her. Third, she has a square face and a too-big nose. Then he told me about how the Greeks had golden ratios for women just like they had for buildings. And if Lesley Gore was a building, she’d fall down. She’d be condemned and boarded up and then demolished.

But she was only seventeen. She’s also the only white person on the show who sings with so much soul it’s almost like anger. Is that what confidence is, I wondered, the sound of a saxophone at the same time? I’d like to make a musical where I sang that way to everyone who’d ever been unkind to me. I’d invite all my teachers to the premiere and my sister would be front row, very important person. That’s all I am, is spiteful. Lesley Gore is good at thanking the audience and smiling, like she’s happy to be there and not the ringleader of some schadenfreude circus. The way she’s done her eyes, with white eyeliner and black mascara, the only word I know for it is mesmerizing, especially when she lowers her lids and sings, “You Don’t Own Me.”

Did you know she turned out queer? Pappy said. I mean she was already pretty butch back then, but you would have thought she’d marry one of the Beach Boys or something.

Then he didn’t say anything and I didn’t either. We shared an inevitable silence, tense with follow-up questions neither of us wanted to ask. What’s butch and what age does someone turn out queer. Whenever Pappy described someone as queer it was like they’d failed a grade and been kept back. I knew he thought I must be gay, in fact the thing neither of us would admit was that I looked a lot like Lesley Gore, except of course my hair. My hair only flipped like that when I used a curling iron.

We watched Lesley Gore, the singing lesbian, and meditated on her big hair, not saying any of this out loud. I wondered if Lesley Gore ever met another lesbian backstage, or was she just sandwiched between Diana Ross and Darlene Love, feeling strange and overlarge. And how complicated her heartbreak must have been, when she got dumped, at her birthday party or at the movies. How alone she must have felt, and all the time. She didn’t sing sad and lonely, but I felt that way, watching her.

She had a good voice, my grandpa said. Shame about her face, though. 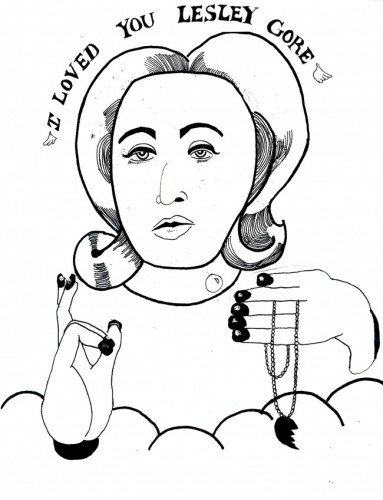 Flannery Cashill is an artist and writer who lives and works in Kansas City, MO.

The Upside Down Girls