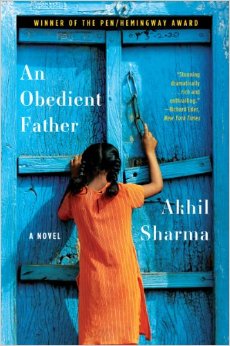 Through his two novels, Akhil Sharma has turned the wrenching lives of collapsing families into gripping narratives. An Obedient Father, his 2000 debut, is told largely from the perspective of Ram Karan, an official living in New Dehli in the 1980s. There’s a haplessness to Karan, and his efforts to perpetuate a corrupt lifestyle–but there’s also a far darker aspect to his life, the revelation casts his relationship with his family in a far more complex light. In revealing Karan’s own justifications for horrific acts, Sharma unceasingly dissects his protagonist’s mind.

His latest novel, Family Life, follows the Misha family as they move from India to New Jersey; it follows Ajay, the family’s youngest son, as he must contend with his family’s disasters: an accident that befalls his brother, and his father’s alcoholism. Ajay’s discovery of literature is also one of the most interesting examples of its kind that I’ve encountered in fiction: it’s shown as a kind of saving grace, but it’s also deeply realistic in its depiction of how someone can haphazardly find themselves through creative expression.

In person, Sharma is open, questioning, and incisive. We sat at Veselka in the East Village and discussed his novels, the lengthy process of writing Family Life, and how its title’s evocation of classic literature echoes Sharma’s own taste in books.

Tobias Carroll: I grew up not far from where Family Life is set, and so reading it left me with a significant sense of central New Jersey. To what extent were you relying on your own memories of that area in the 1980s as opposed to doing research on it?

Akhil Sharma: It’s almost completely memory. In fact, there was an apartment complex that’s referred to; in one of the earlier drafts, it had a much bigger role, and because I did not want to do research, I just changed the name of the apartment complex so that it would not be limited by that.

TC: Were there other areas where you didn’t want to be constrained by the specific history of a building or a place?

AS: I’m sure I did. I can’t remember off the top of my head. For me, it isn’t exactly that I don’t want to be constrained, but that when I begin working with nonfiction, I begin to feel this pressure to include things in the novel that I would not feel interested in. To some extent, not checking my memory allows it to be slightly purer. 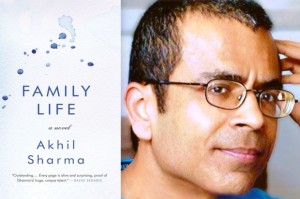 TC: I was reading the interview you did in Salon, where you talked about the number of drafts that you’d written of the novel. I’m curious: was that all the same narrative, or was it a much more sprawling narrative? Were there pieces from that process that might end up going elsewhere?

AS: I don’t think they will go elsewhere, although there are portions that people have suggested might go elsewhere, that can be excerpted. I don’t have any desire to touch that material, but I think that there are pieces that could be. The other drafts, many of them are in the third person; some of them are from the point of view of the father, some from the point of view of the mother. There are drafts which are much more about alcoholism, and about the father and his interactions with the Indian community, especially with the idea of alcoholism. All of these things which were left out. It was never a grossly large novel, but there were many versions of the novel.

TC: If you wrote a scene from another character’s perspective that didn’t make it into the final version of the novel, did you still find yourself relying on that, that those scenes were informing what was happening in the novel?

AS: I presume that many of the things that didn’t make it into the novel inform what I write. That would be true for everything. The danger, I imagine, is that you change certain viewpoints of the novel and be evident that the change is not in the book. I can imagine that creating a muddiness in the work.

TC: Family Life begins in the present moment and then flashes back, and it ends with the narrator coming to one particular realization. What was the process like in terms of creating that almost dreamlike scene in the opening, where the main characters are in a very different position than any other time we see them in the book?

AS: I’m not totally sure how I generated that scene. The logic of it was that I wanted to figure out a way to allow the language of the eight-year old, the nine-year old be a little more sophisticated. And so by making clear that this was retrospective, it allowed some of that complexity to come through to the younger Ajay. That was the logic of it. I was also very conscious of creating–it’s a bracketed narrative, but the brackets don’t match up. It doesn’t close. There is a dreamlike-ness of it, or an unsettling-ness to it. And that, I wanted.

There isn’t symmetry. Symmetry was something that I had to resist; that’s sort of my default setting. I chose to resist it because, I think, with a work like this, with a situation like this, the repercussions go on and on and on. And so any ending would be false. The book has two beginnings and two endings. The first ending, the scene with the flashlight, I can see as a symmetrical ending.

TC: Something I was struck by, both in this novel and in your first novel, were the titles. How far along in the process are you when you decide on that?

AS: Very late in the process, maybe the last six or nine months, was when I came up with the title. What I wanted was a title that was innocuous, and also threatening. Which, of course, Family Life is: threatening.

TC: Was it a similar process to coming up with the title of your first novel?

TC: Did you have a title for it beforehand, or…

AS: I had a title for it, called Stars From Another Sky. There was a moment in an earlier draft where, the morning after the accident, Ajay comes out and they’re all going to go to the hospital. He thinks about astrology, and he thinks that this should not be their life.

TC: Reading An Obedient Father, when it became apparent where some of those characters were going, I was wondering: what was it like writing from inside the head of someone who is that self-justifying, and is capable of such things?

AS: A lot of it was that I was writing from my own guilt. I needed to find something where it would be appropriate to feel guilty like that. That’s really what it was.

TC: When you were starting to write Family Life, did you think that that would be an easier book, or did you anticipate that it would be as difficult, but in a different way?

TC: Had you been writing other things, short stories or nonfiction, in the interim, or was this the only thing?

AS: It was the only thing. It was so terrible, it was such an awful experience, that if I had had something else, I would have stopped.

TC: What made you realize that you had reached the stopping point for this novel?

AS: For me, it began to have the qualities that I want in fiction. One, that it was reading very, very fast. Two, it was full of humor. Three, you could sort of walk into a room and it would feel like a real room. Four, certain little things that I feel are very mine, such as having beautiful things next to gross things. In the beginning, when the father is brushing his teeth, the sentence says, “Each night my father would stand before the sink, the sky full of stars, and brush his teeth till his gums bled.” That combination. This idea that everybody is right and everybody is wrong. When I began to see these, I said, “Okay; this feels like real life, then.”

TC: You talked about the kind of fiction that you look for; what are the kinds of books that you read?

AS: I like Chekhov tremendously; I like Thomas Hardy tremendously. I don’t read much contemporary fiction. Those are the writers that I try to imitate.

TC: The process you describe in Family Life of a character deciding that they want to engage in creative activity, and doing that without any guidelines–there’s the scene where Ajay is reading about Hemingway, and going about becoming a writer without necessarily knowing what the accepted best place to start is. I could really relate to that. Were you drawing on your own experiences for that?

TC: When was the point for you at which that approach to discovering fiction and writing fiction began to click, when you realized that you were telling the stories that you meant to be telling?

AS: For me, when I was reading Hemingway, I began to write stuff, and very early, I began to be able to publish things. Something that I wrote in the tenth grade was published in a small magazine called The Quarterly. As my sense of the world became more complicated, I found that I was less and less able to represent it, and I had to keep growing. I always feel like I’m trying to play catch-up.

AS: It was a world I knew. I had an uncle who collected bribes, who was in the physical education department. I was in India for Rajiv Gandhi’s assassination. I knew these people; it isn’t an exotic approach. This is my family.

Akhil Sharma’s first novel, An Obedient Father, won the PEN/Hemingway Award, and W.W. Norton will be rereleasing the paperback in April 2014. His writing has appeared in The New Yorker, among other publications. Granta has chosen him for their once-a-decade Best Young American Novelists list. He lives in New York.
Tobias Carroll lives and writes in Brooklyn, New York, where he is the managing editor of Vol.1 Brooklyn. His fiction and nonfiction have been published by Midnight Breakfast, The Collagist, Necessary Fiction, Bookforum and Joyland. He can be found on Twitter at @TobiasCarroll.