In the story, it’s simply “the dark gaunt house on Usher’s Island,” the site of “the Misses Morkan’s annual dance.” Here, on a cold night near the end of the 19th century when “the snow was general all over Ireland,” Gabriel Conroy—a husband, a son, a father, a teacher, and an occasional book critic with a fondness for European languages and fashions—looks up from the front hallway to see his wife Gretta lingering on the narrow staircase, listening to “a few chords struck on the piano” and a man’s voice singing, as a door to the past, which has never been securely closed at any moment in the story, is flung wide open.

James Joyce wrote “The Dead” while he and his family—his lover and future wife Nora Barnacle and their infant son Giorgio—were living in Trieste in 1907, and even the process of conceiving and composing the story was as much an act of memory as imagination. The year before, while living in Rome, Joyce had believed he was finished with Dubliners, a collection of stories written with what he called a “scrupulous meanness” that would portray Dublin as “the centre of paralysis” in a sclerotic and repressive country—a country he’d exiled himself from when he’d left for Europe in 1904 with hardly more than a few battered trunks and his pockets filled with borrowed money, accompanied scandalously by Nora. But in a letter to his brother Stanislaus on September 25, 1906, after the usual complaints about his poverty, Joyce acknowledged that the work he’d once called “a chapter of the moral history of my country” might, in fact, be incomplete. “Sometimes thinking of Ireland it seems to me that I have been unnecessarily harsh,” he wrote. “I have reproduced (in Dubliners at least) none of the attraction of the city for I have never felt at my ease in any city since I left it except in Paris. I have not reproduced its ingenuous insularity and its hospitality.” 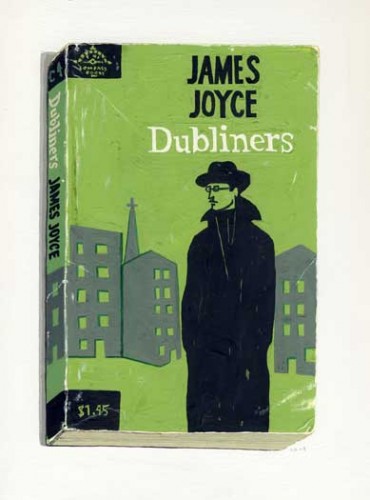 And that was why, as he began to imagine “The Dead,” Joyce remembered the tall Georgian house at 15 Usher’s Island where his great aunts, Mrs. Mary Callanan and Mrs. Julia Lyons, had held their annual holiday party in the rented floors where they lived above a corn merchant’s office. Joyce had walked up the narrow steps from the front door many times and had perhaps even lingered in that same spot just below the half-landing where Gretta listens to the old ballad “The Lass of Aughrim” and suddenly remembers her lost love, a boy named Michael Furey who died of tuberculosis after walking out in a storm to see her (an incident drawn from Joyce’s own jealous memories of a story Nora had told him about a boy from her teenage years in Galway, Sonny Bodkin, who’d died of rheumatic fever after declaring his love for her on a stormy night). Like the Misses Morkan in “The Dead,” Joyce’s great-aunts “believed in eating well” despite a “modest” income and offered “the best of everything”: roast goose with all the trimmings, accompanied by dancing, musical performances, and a speech (often given by Joyce’s father). So if Dubliners needed to balance its “scrupulous meanness” with a taste of Irish hospitality then Joyce would take his readers to the house on Usher’s Island.

Yet over time the very site of a story that’s so rooted in memories and ghosts nearly became one itself. By the end of the 20th century, as the properties around it were razed and much of the world that Joyce had known was lost to the sort of urban development that reshapes any major city, the house at 15 Usher’s Island fell into ruin. Its roof and upper floor were removed in the 1970s. Its back wall buckled and crumbled. Its foundation ebbed away. Its fireplaces and its fanlight above the front door (“a particularly fine fanlight,” according to Irish Senator and Joycean scholar David Norris) were stolen. Eventually the property became a squat for prostitutes and heroin addicts. Though plans were drawn up to restore the house in 1995 and the city government even stipulated to a local developer that the construction of an adjoining apartment complex would be contingent on the restoration of 15 Usher’s Island, nothing was done. 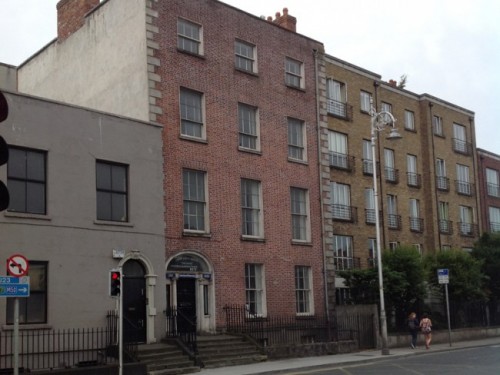 Until, that is, in 1998 a local barrister heard about the demolition of a different house in Dublin, one where Joyce had lived as a teenager (one of the many houses briefly occupied by the Joyce family as they plummeted down through the city’s socio-economic strata), and rushed to the site to buy the rubble before it could be carted away. Brendan Kilty hadn’t yet read any of Joyce’s works when he’d first visited Usher’s Island with a fellow student from Trinity College in 1979 on Bloomsday—June 16th, the day celebrated in Joyce’s masterpiece Ulysses—but like Gretta on the stairway and Gabriel transfixed looking up at her, Kilty experienced his own vision that night: that one day he would own the house himself. Like Michael Furey too, walking out into a storm in the grip of an unbreakable passion, Kilty eventually convinced the developer who owned the property to sell him what remained of the house at Usher’s Island.  “I think he thought, if I was mad enough to buy the rubble, then I deserved the house,” Kilty told The Sunday Times of Dublin. After filling two buckets with abandoned syringes, he set about the work of restoration—a new roof, a new floor in the basement lifted a few inches above the tides from the River Liffey that had rotted away the old floor, a restored foundation and back wall—until the house could be reopened to the public on Bloomsday in 2004.

“History still has a strong handshake here,” Kilty told me during a visit to the house in summer 2015. A barrel-chested man with a sweep of white hair and that particularly Irish gift for infusing his speech with poetry and legend, Kilty hosts recreations of the dinner from “The Dead” and has published and offered for sale a lavish Centenary edition of the story to raise funds for continued work on the house and its ongoing structural maintenance. (For more information on donations to the house and purchasing Kilty’s edition of “The Dead,” visit here.) But in Dublin today—where historic sites and monuments sit side by the side with luxury stores and franchise restaurants, where tourists wielding rubber axes and broadswords ride in buses outfitted like Viking ships, and men in Leprechaun costumes give away coupons for Guinness only a few steps from the statue of Joyce on O’Connell Street—history is also routinely transformed and commodified. And how do you hold on to the past then? 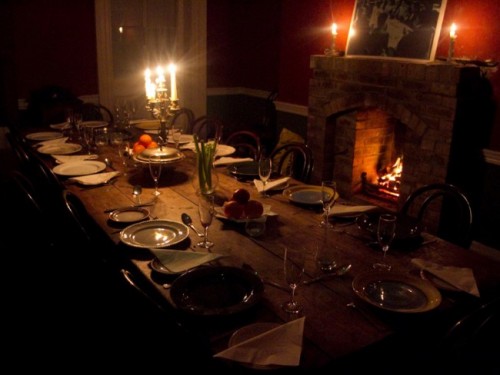 “The Dead” itself is suffused with loss and an awareness of people and traditions passing away. In his speech at the Misses Morkan’s party, Gabriel celebrates his aunts as the very embodiment of the sort of Irish hospitality that Joyce evoked in his letter to Stanislaus. But Gabriel is all too aware as well of his aunts’ frailty. His words are really as much an elegy as an encomium: “As long as this one roof shelters the good ladies aforesaid . . . the tradition of genuine warm-hearted courteous Irish hospitality, which our forefathers have handed down to us and which we in turn must hand down to our descendants, is still alive among us.” Because, as Gabriel knows, the Misses Morkan will become ghosts too and even the roof above them will eventually be sheared away by time and change. “One by one they were all becoming shades,” Gabriel thinks at the end of the story as he watches Gretta sleep after she’d revealed the story of how Michael Furey had died for her. 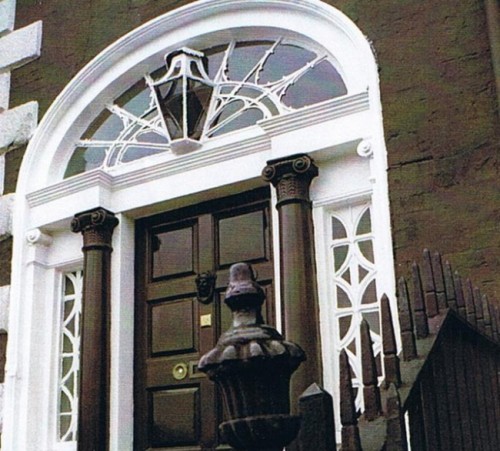 Yet just as Joyce meticulously worked—sometimes meanly, sometimes lovingly—to preserve in words the places and traditions that he knew were vanishing, Kilty also works to salvage and restore the remnants of another time with the same passion for detail. From his rediscovery of the fireplace where Joyce’s great-aunts had their holiday meal prepared, to his mixing of ash from that fireplace—perhaps even the ashes from one of those holiday parties—with the ink for his edition of “The Dead,” Kilty’s painstaking work makes history tangible. “Better pass boldly into that other world in the full glory of some passion,” Gabriel thinks, “than fade and wither dismally with age.” To step through the doorway of 15 Usher’s Island now is to feel the glory of such passion and, for a while at least, to step through another doorway back into the world of “The Dead.”

Michael Kobre is Dana Professor of Literature and Chair of the Department of English and Creative Writing at Queens University of Charlotte. His essays and stories have appeared in Michigan Quarterly Review, Tin House, TriQuarterly, West Branch, MAKE, and other journals. He’s the author of Walker Percy’s Voices.