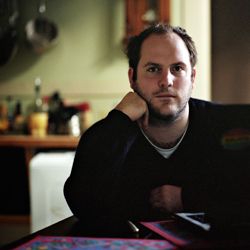 David Shields: All of your work seems to me mature, complex, layered, bittersweet, but this book feels almost unspeakably sad. How do you write or read about such sadness without succumbing? This is a bit of a rhetorical question on my part. I can’t read work that isn’t unspeakably sad, but I want to hear your answer, Peter.

Peter Mountford: All my favorite pieces of writing break my heart, badly. I’ve actually assembled in a manila folder a dozen or so short stories that bring me to tears every time I read them. And I sometimes reread one just to experience that little rush of heartbreak. It blows open the doors within me. What I’ve noticed with those stories is that there’s usually a lot of humor along the way to coax the reader onward, and to sharpen the contrast. That’s important, I think, and this book has a certain comedic atmosphere, even if it’s not at all a comedy. Toni Morrison once said something like, “My goal is to break my reader’s heart, I want to make them cry, and if I’m going to do that, I can’t cry.” I’m paraphrasing, but it’s true. As a writer you can’t force the emotion onto readers. 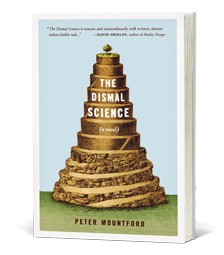 The emotion has to be a natural byproduct of what’s happening, and it has to be earned, too, so it often takes a while. People have to be made to care, over time. The crushing end of A Farewell to Arms—without the preceding 200-something pages, without the aching beauty of their stolen romance, without that it wouldn’t eviscerate you.

PM: Thank you for saying that, but I think the answer is implied by your question. Certainty is dead in the water. That’s true of a lot of things, not just politics. Take some character who’s just an awful person, cruel and selfish and so on. Fine. But until you see his thwarted ambitions, his private misery, his bafflement at the questions facing him in life, he’s just not alive. Even then, until he sort of violates the boundaries that you—as the author—have assigned to him, until then he’s not quite alive. We’re dualities, pluralities.

In economics, there’s almost never an obviously right policy decision. People have opinions. But it’s always a question of weighing relative costs and benefits. And that seems like everything in life, to me. You should choose this college over that college, someone might say, and you can tally up the pros and cons, but, end of the day, you’re basically flipping a coin.

Carolyn Forché said that good “political” poetry will obliterate the line between personal and social inquiry, and that seems true with fiction, too. Essays, also. If it’s not about a personal problem, a human being facing a problem, then it’s more abstraction. I want to be lost in the problem, I want to feel like I’m about to answer the question, and then encounter a harder question. Ultimately, I want my characters to find themselves facing impossible questions—you must ruin this beautiful thing, or you must ruin that beautiful thing.

DS: I love how much “dismal science”—economics—is in The Dismal Science. How can economics become the basis of a novel?

PM: Well, in Victorian novels everyone’s always counting their shillings. It’s a big motivating aspect of characters’ lives. Jane Austen was concerned with money and sex, as others have pointed out. The protagonists in her books are often faced with this fraught quest for a man who is both lovable and can provide financial security. Of course, she couldn’t really talk about sex. Now, it’s perfectly fine to write about sex. But money’s iffy. We’ve traded taboos. I don’t know when it happened, but it did.

Virginia Woolf wrote, “A woman must have money and a room of her own if she is to write fiction.” The room is made available through money, so what she actually needs is just money. But title, of course, edits out money; it’s just “a room of one’s own.” Somehow, when she wrote that lecture, writing about money had already become unseemly.

DS: Your work is often about people completely different from you—an old man, a gay painter, a Latino from LA. How do you manage to project yourself so well into other people’s lives?

PM: To be honest, it’s pretty difficult, and sometimes it just doesn’t work. Once you’re fully inside the character, it’s a breeze, but getting there can be quite confusing. Mostly, I just write oceans about them, map out every contour of their life. I write scenes that I know I’ll never use, like when they lost their first baby tooth or got caught shoplifting as a twelve-year-old. I think a lot about the people who’ve been important to them, even if those people don’t show up in the book. The people we’ve loved define us in important ways.

Ultimately, I have to have a profound emotional connection with the person, even if we’re ostensibly quite different. I need to share something fundamental with them I have real sympathy for their problem, their quest. I have to have struggled with the same thing, in a way. Finally, I often share certain basic things with them, too—the characters you mentioned are all men, for example, and they’re all reasonably well-off. I use things like that to try to get inside, because I know once I’ve really taken up residence inside that person, I’ll be fine.

DS: What next for you? You are writing a lot of wonderful personal essays. A book-length essay? A novel about Sri Lanka, where you spent formative years?

PM: I would love to do a book-length essay about money and my love-hate relationship with it. Or my unrequited love of it, I guess. I’ve never had much of it, I’ve always adored it from afar. But whenever I get a chance to make a decent wage, I end up passing on the opportunity. If I wrote a book about sexy teenage post apocalyptic vampire mermaids, maybe I wouldn’t be driving a busted old KIA, but I just can’t. I’m fascinated by this little tug-of-war inside me. We’re all hostages of this system in our own ways. It’s very sad to me, very beautiful and sad.

Also, yes, I’m writing a novel set in Sri Lanka, set at the climax of the civil war in 2009. I look at the outline, and it looks impossible. But the writing is going very well this month. After more than a year of playing around with it, I think I might have taken up residence inside the character. Maybe not. We’ll see how I feel about it next month.

Peter Mountford’s debut novel, A Young Man’s Guide to Late Capitalism, was the winner of the Washington State Book Award and a finalist for the VCU Cabell First Novelist Award. Mountford’s work on The Dismal Science has won grants from 4Culture, Seattle’s Office of Arts and Cultural Affairs, and the Elizabeth George Foundation. His short fiction and essays have appeared in the Atlantic, Granta, and  ZYZZYVA. He is currently a writer-in-residence at the Richard Hugo House and at Seattle Arts and Lectures.

David Shields is the author of fifteen books, including Reality Hunger, The Thing About Life Is That One Day You’ll Be Dead, and Salinger (co-written by Shane Salerno). He lives with his wife and daughter in Seattle, where he is the Milliman Distinguished Writer-in-Residence at the University of Washington.

Sneaking Up On Creation: An Interview with Dunja Jankovic

The Altering Perspective I Like: An Interview with Michael Ondaatje