In the coming weeks, The Open Bar will be featuring interviews, stories and essays from the writers, musicians, and artists that make up the two cities we call home.

Today we talk with Sakura Maku, whose comic Pigeons Bums Burning Bright is featured in our magazine’s latest issue, Portland/Brooklyn.

I first encountered NY artist Sakura Maku’s art in the Domino Books zine Windy Corners. I was thrilled by its poetry and playfulness and admired Maku’s non-fanaticism regarding rectilinear layouts. I am always moved when Photoshop hasn’t been asked to mask the fact that human hands make drawings.

Maku’s words and images are equally strange and startling—both feel so full of voice. Art comics often circulate in a different dimension than novels, poems, and graphic novels. Self-publishing and independent distribution are the primary means of disseminating work— but like the poets and storytellers Tin House loves, comic artists like Maku are conducting experiments with expressive possibilities, and having the same sorts of adventures at the edge of storytelling. Comic artists are an especially active faction of the storytelling communities in both Portland and Brooklyn, which is why we were thrilled to include Maku’s work in our latest issue.

As an impassioned and voracious consumer of poems, stories and art comics, I was so happy to chat with Maku about her words and pictures, about toughness, Yertle the Turtle, evicting inner-provosts, and of course, Red Lobster.

Elizabeth Pusack: I love your work, but I don’t know much about you! Where did you grow up? Were you bold or shy? Did you like school?

Sakura Maku: I was born in Japan and moved to Buena Park, CA when I was three.  We moved to Florida when I was ten and moved around a lot, and then I moved to New York to go to college.  I was shy and adaptable, I liked school but hated Saturday Japanese school…

EP: What was so bad about it?

SM: It wasn’t bad at all, I wish I kept going. We would meet up early in the morning, at a bus stop, and a giant smelly bus would drive us far out to a high school that the Japanese school rented on Saturdays. And the high school rooms reeked of adults. Saturdays were my pungent smells days. No one was allowed to pierce their ears or have a perm, and most of the teachers were priests.

EP: Do you remember the first art you made? The first comic?

SM: I believe the first art I made was on a very nice desk my grandmother gave my sister. I took a permanent marker and drew all over the entire desk. The first comic I made was a light pencil drawing on white paper, a story about a star that came to land and turned into a human friend. 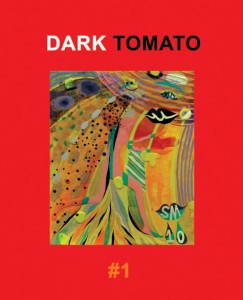 EP: In Pigeons Bums Burning Bright Frankie gets to spend a year exploring the Brooklyn Museum, a year in the Botanical Gardens, and a year at the Brooklyn Public Library instead of going to school! It reminds me a bit of From the Mixed-Up Files of Mrs. Basil E. Frankweiler. The kids in that book run away to the Metropolitan Museum of Art. Is there one Brooklyn spot you’d especially like to run away to, or spend a year in?

SM: I don’t know of Basil E. Frankweiler but I’ll check it out.  I went to the Brooklyn Museum a ton when I lived around the corner in 2005, the first building in Pigeons Bums was my building, I lived in all of the apartments in the story over the years.  Anyway, the Brooklyn Museum is different from the others, they’re not afraid to paint their walls various colors, and they mix Brooklyn historical paintings with contemporary art.  My favorite thing to do regularly was walk around the sunlit floor of Rodins, all slightly larger than life, what a treat!  The best kind of museum is where you’re free to experience the art because the museum is experiencing it as well.

EP: In your comic in Windy Corners #3 (the magazine of Domino Books) you’ve got lyrics from Mariah Carey’s “I’ll Be There.” In Dark Tomato #1 you’ve got, “I’ve been working on the railroad,” as well as William Blake’s Auguries of Innocence: “To see a world in a grain of sand, and heaven in a wildflower.” You’ve also got a big chunk of Yertle the Turtle in there as well. How do these kinds of citations come into your work? Do they trigger scenes? Do they come in later like a soundtrack?

SM: The songs and lines are part of my culture.  They’re all things I’ve experienced heavily at various points in my life, that stick around and add meaning to my thoughts.

EP: You mention a number of films in your comics—Splash, Touch of Evil, Battle of Algiers, Beau Travail. At the end of Dark Tomato #1 you roll credits—listing characters and cast members “in order of appearance.” What do comics and films have in common?

SM: Well they have a lot in common, and in college I learned about the cultural ideas behind both around the same time. It’s exciting to interchange ideas, why would they have to have separate courses in my brain? There’s no place for a provost in my brain.

EP: You said in a 20 Questions interview with Austin English (Editor of Domino Books), “Sometimes the war heavy American maleness makes me a bit nervous about older American comics history.” Has this changed? Is there a particular kind of “maleness” in contemporary narrative art? How about “femaleness?”

SM: Well a few years back, the Jewish Museum and the Newark Museum curated a two-part exhibition called Masters of American Comics.  The first part represented the first half of the twentieth century, and the second part represented comics from the 1950s to the present. I loved the show! But I just thought it was weird that there were no women involved. I was searching for that one unknown Louise Burgeois of comics to no avail.  It made me feel a bit on the outside looking in, though prior to attending I thought I was more on the inside.

EP: Hopefully the next centennial will look really different! In Dark Tomato #1, Prince Tamlin Tomato sees first a “flash of FACE” and then a sea of moony faces while she is driving her train through the tunnels. The apparitions are disorienting for her and for the reader. It is hard to determine what’s waking life and what’s a trance. Time passes strangely. Why does the idea of haunting permeate in your work? 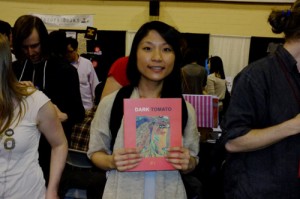 SM: Well it’s disorienting for myself as well!  Flash and Face have been in my work for a while.  I think it’s a way for me to come to terms with the way my grandmother describes the initial flash of the atomic bomb.  Generations of my family are from Nagasaki.  My grandmother was twenty-two in 1945, the eldest of seven siblings, and her and her family lived something like 2.5 kilometers away from the hypocenter.  Luckily they survived and I’m here!  More than half of the people in that zone weren’t so lucky. In this way it’s disorienting for me to even think about, I reach new conclusions often, but perhaps I’m able to come to terms with them better through my comics sometimes.

EP: Do comics have a particular way of treating global or national traumas, personal traumas? Do they play an important role in this process?

SM: I think they can. An artist can distribute thoughts and ideas to a community of receptors in less regulated creative areas such as comics.

EP: You make comics, but you have also exhibited paintings around the world. Is there a relationship between the gallery world and the art comics world? When do you make a comic and when do you make a painting?

SM: I wish I knew all these things clearly, but generally, I paint and draw hand-in-hand. Worlds and categories seem to get established by others after the work is done. For me it’s not very interesting so I try not to think about it too much.

EP: Red Lobster is in all of your comics! Sometimes it morphs into Red Robster or Red Rbster. What associations do you have with that place? How did it become a motif for you?

SM: I guess Red Lobster is from Orlando, where I lived through middle school and high school, where my family still lives now. Every year when I visit, my family and I go to our favorite Red Lobster, there are a ton everywhere especially by us. And every year, my dad orders the half dozen oysters in the beginning, (oysters now extinct on menu btw, since Katrina), and talks about diving for oysters and crabs in his youth in Nagasaki, and then he orders a second half dozen or sometimes a second dozen! It’s a place I really like to be, but I’ve gone to the Red Lobster in Time Square and felt like it wasn’t a real Red Lobster, and my family wasn’t there either.

EP: You’ve said you identify with Chibi Maruko-chan, Bart Simpson, and Krang (from Teenage Mutant Ninja Turtles)! They seem so different! If you were drawing yourself today and weren’t aiming for physical resemblance, what might you look like? You could make a drawing if you prefer!

SM: The similarities exist in the time I consumed these guys and gals. I watched them all in the 90s, again separate TV shows, different languages even, but one me. I have an image for you!

EP: Can you tell us a little bit about your process? Do you script or story-board, do you draw from life or from memory? Do you have any special work rituals?

SM: I do all of these things but with no stringent recipe. I usually have to be in the right mindset and I like to work by a window.  I know what I like and what works, but if I’m too strict with myself or not strict enough, I’ll psych myself out and make something really meaningless instead.

EP: How do you recognize meaninglessness?

SM: Well maybe meaningless isn’t the best word to describe a failing page. For me, the ideas should be developing, the lines, colors, and washes just right. Elements are on the verge of sloppy, slippery but not outright sloppy. Think of William Blake’s hand-painted etchings he pulled and bound into books at home, Jack Smith’s writings and exceptional drawings of his Brassiere Museums on hotel stationary. These are opposite examples of what I’m trying to describe. When it’s not happening it just isn’t, and sometimes it’s best to start a new page.

EP: What kinds of non-art worlds attract you through their visual aspects these days? Besides other art, to what kinds of imagery are you drawn?

SM: I love the subway. I went snorkeling recently and would love to live underwater.  I love parks, tennis courts, theme parks, mountains, and anywhere in Nagasaki, though I’d like to travel more throughout Japan in the future.

A Conversation with Eileen Myles about, well, “About Mary”