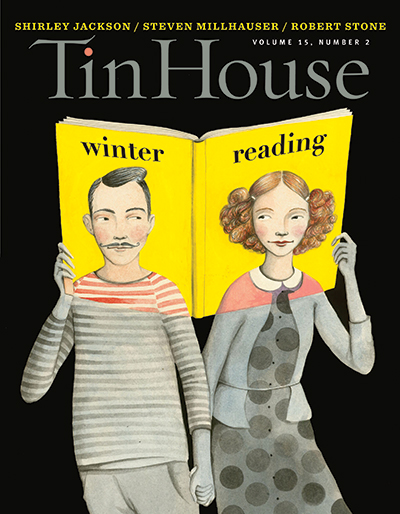 Travel, like great writing, makes us look at the world through new eyes. This past summer I searched for stories over four continents, from Florence to Portland to Lima to Brisbane. And I was continually rewarded by narrative, in its many forms, from the 15th century paintings in Florence and Cuzco, to poems I heard read aloud in Portland and Brisbane. After a week deep in the Amazon, I was hardly a local but I became acclimated enough to see and appreciate everything I’d missed when I first arrived. It is the same with reading—we enter every new work of fiction or poetry as a stranger, an outsider, and if the author is a sure and able guide, as Steven Millhauser is in “Arcadia” or Paul Willems is in “Cathedral of Mist,” then his world becomes a place we experience on all levels. Such authenticity transcends borders, language, and time. In rare moments of transcendence my experience of a story or poem felt like a slap to the face. The alchemical mix of language and idea so jarred me that I was forced to reexamine my previous assumptions. One such instance was when Major Jackson read from his epic poem-in-progress, “OK Cupid,” at our Writer’s Workshop in Portland. There was a collective intake of breath when he launched and it seemed like no one exhaled until the last line. I hope it hits you as hard as it did us.

A note about the digital versions: If you read on a Kindle, use the Mobipocket edition; for all other e-readers, use the ePub edition.

Steven Millhauser
Arcadia
Fiona Maazel
My Dad Has
Paul Willems
The Cathedral of Mist
Translated by Edward Gauvin
Elisa Albert
Am Happy for You That You Are So Happy
Alexander Maksik
Trim Palace
Chinelo Okparanta
Marta
Shirley Jackson
Mrs. Spencer and the Oberons
Jenny Offill
Voyager

Patricia Lockwood
The Bible
Meghan O’Rourke
City of Angels
Nightdream
Britta Ameel
Autopsy
Urchin
Kazim Ali
Mosaic (His Prayer)
John
Wong May
Fear & Hesitancy at the Optometrist’s
The Diploma
Kevin Young
Winehouse
Winehouse
Dora Malech
Are Not No Tear
Mark Z. Danielewski
At Your Hospital Bed
Bianca Stone
from Practicing Vigilance
Josh Bell
One Day, Alone on the Houseboat, Vince Neil Changes the Name of Everyone He Has Known, Knows, or Is Like to Know—Male and Female—to James
Major Jackson
OK Cupid