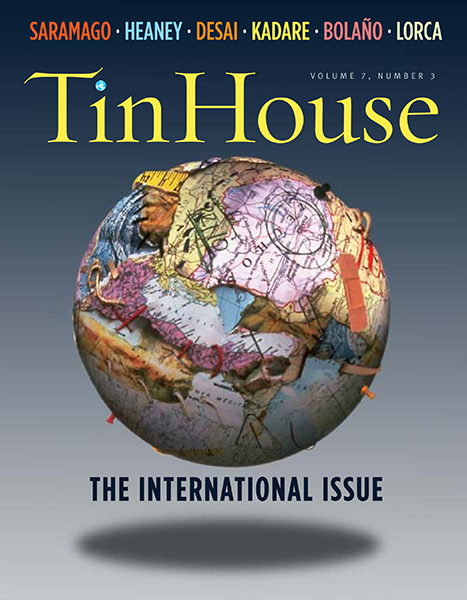 As proud Americans we feel it’s our sworn duty to bring you, gentle reader, the gosh darn best writing out there, whether it be Made in the U.S.A. or Made in the U.A.E. We’ve sworn our allegiance to art with a capital A, and while the powers that be would like us to order another basket of supersized Freedom Fries and forget that the rest of the world even exists, we’re not having any of it. Many international writers seem to be taking on more complex stylistic and emotional terrain than their American counterparts. Whether it is Bolivian Edmundo Paz-Soldan writing from the point of view of a young Kansas woman exhuming graves in Srebenica or Romanian Dumitru Tsepeneag bending time and form in his romantic Robbe-Grillet-inspired fable, the writers in this issue are pushing the stylistic and emotional envelope. Not surprisingly, you’ll also discover writing with a distinctly political bent, from writers such as Portuguese Nobel laureate José Saramago’s cutting take on polling station bureaucrats, Pakistani Kamila Shamsie’s playful critique of corrupt politicians, and Binyavanga Wainaina’s clash of cultures in modern Kenya.