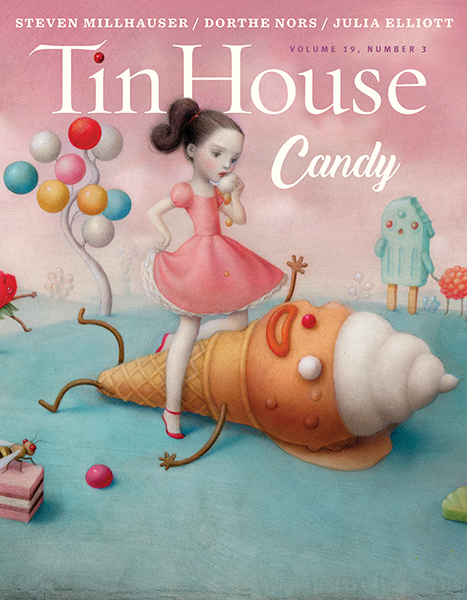 Such is the universal sugar rush that all desirous things—wrapped in a sweater or snorted through a straw—are compared to candy. Steven Millhauser, in his story “Guided Tour,” plays with the legend of the Pied Piper of Hamelin, while Maria Adelmann reimagines Hansel and Gretel. In “Candy: A Footnote,” Rebecca Makkai breaks down her Hungarian family’s history of bootlegging candies behind the Iron Curtain. In his bittersweet essay, “Sweetness Mattered” Aaron Hamburger recalls his queer awakening as he tried to woo his high school crush with Smarties. As with Red Vines, you can’t just scarf a single poem. Timothy Liu’s “Ode to Candy Crush” and “Love Poem,” Kaveh Akbar’s “In the Beginning” and “I Wouldn’t Even Know What to Do with a Third Chance,” and Lucy Anderton’s “The Joy of Sex” dance between sweetness and nausea. Dip into the Lost & Found section and you’ll be treated to Emma Komlos-Hrobsky’s pointedly sour reassessment of Roald Dahl’s Charlie and the Chocolate Factory. Like an Everlasting Gobstopper, this issue will keep your taste buds infinitely engaged.