Earlier today, we featured an interview with Dr. Malcolm E. O’Hagan, President of the American Writers Museum. In anticipation of the 2016 launch of that institution, artist Mia Funk has been tasked with creating a group portrait of great American writers. Starting next week on The Open Bar, Mia will share her sketches and inspirations with us in a new column, Portrait of the Writer.

The series will start February 10th with Mia’s portrait of and interview with Joyce Carol Oates. We talked with Mia via email about the process of creating portraits of these literary giants.

Tin House: How did the Portrait of the Writer idea come about?

Mia Funk: Since last year I’ve been talking with Dr. Malcolm O’Hagan about doing the group portraits for the American Writers Museum. I have just sent in an application for a Guggenheim Fellowship, which will help determine the scale and the number of writers we may include in the eventual portraits.

In the meantime, I wanted to do something which felt more personal. It goes back to things Malcolm was saying about foregrounding and selecting writers from such a vast pool. It’s difficult to narrow the list and I thought sharing my sketchbooks with readers of Tin House would be a way to feature individual writers and explore themes in their work before approaching the final painting.

I still wasn’t sure what to call this series of sketches. I’d thought about Do You See What I’m Hearing? in reference to James Joyce’s Ulysses. Finally, I decided on Portrait of the Writer. 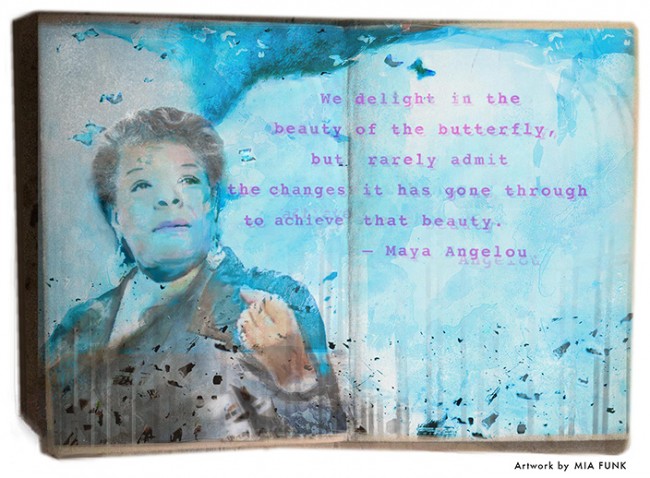 TH: In a lot of the sketches, you seem to be working from quotes. Is there something about the specificity of language that gets you closer to these writers than you can via biographical details?

MF: Specificity is a good word because an artwork is not dissimilar to a poem or story or other short forms. I began to think about metaphors themselves, how they’re used to tap into our collective unconscious and also awaken our capacity to remember, create and dream. How sometimes language weighs more on our lives than the real world.

It’s not possible to cram in all the biographical details so you have to make choices. I try to give a short understanding of something essential and for that I look to a writer’s own words. I feel that gets you closer. Opens a door on their perception. You don’t need to draw the four corners to feel you have been in a room.

While there’s lots of interesting quotes, they don’t all spark imagery. So I spend a long time searching for a line which captures something essential about a writer’s life and work. I’m looking for quotes which evoke an image, but also set up a curiosity and mystery and leads you back to their writing.

TH: It’s easy to forget that metaphor is such a basic building block for us. In the way we talk, write, and even see, we often start out with an image, and then through metaphor, we start to describe it and define it. Do you feel like painting these portraits is the opposite of that, or just another step in the same direction?

MF: Language. Image. Music . . . it’s all a kind of storytelling. For me the different art forms don’t oppose each other, but run on parallel tracks. I feel originality happens in the synesthetic moments when different senses converge.

I thought there was potential to find added beauty in certain things a writer said by translating it back into image. When Joyce Carol Oates said she sometimes feels as transparent as a glass of water. I thought, what a lovely image. I will paint her as a glass of water. For me there is a real satisfaction in attempting to turn a metaphor into something more concrete.

We all speak imagistically, only sometimes we are so bombarded by images and language that we forget. We become blinded by sensory overload. I think that’s the point of all art: to take something we are all familiar with and make us look, hear, feel it again as though for the first time.

TH: Why did you decide to make these portraits of the writers, rather than, say, illustrations of the quotes you’ve chosen or their bodies of work?

MF: All faces tell stories, but the faces of writers who spend long periods alone and looking inwards, are particularly interesting and challenging to paint. And that’s what the American Writers Museum were interested in. I will be trying to put echoes of their work within the group portraits. Along the bottom of this watercolor of Maya Angelou you can see flying debris from a dark hurricane which funnels up into a storm of blue butterflies. Just the memory of a cage. I hope this captures something of the spirit of resilience readers find in her writing; out of all the pain and experiences comes something of beauty.

One of the challenges of capturing a writer’s personality is, of course, that they don’t have just one. Also, many writers aren’t terribly interested in what they wear. It’s not about the outward appearance but making a continual journey inwards. Traditional portraiture involves external symbolism, jewellery and other accessories which point towards the subject’s standing in life, and clothing allows artists an opportunity to show off their skills in reproducing details, but to focus on the external somehow seemed wrong when portraying writers, who aren’t just the faces they represent to the world, but a collection of all the characters they’ve realized and all the stories they’ve told.

Joyce Carol Oates said it more succinctly in her interview, “We all inhabit interior landscapes and these are mediated to us through language.” 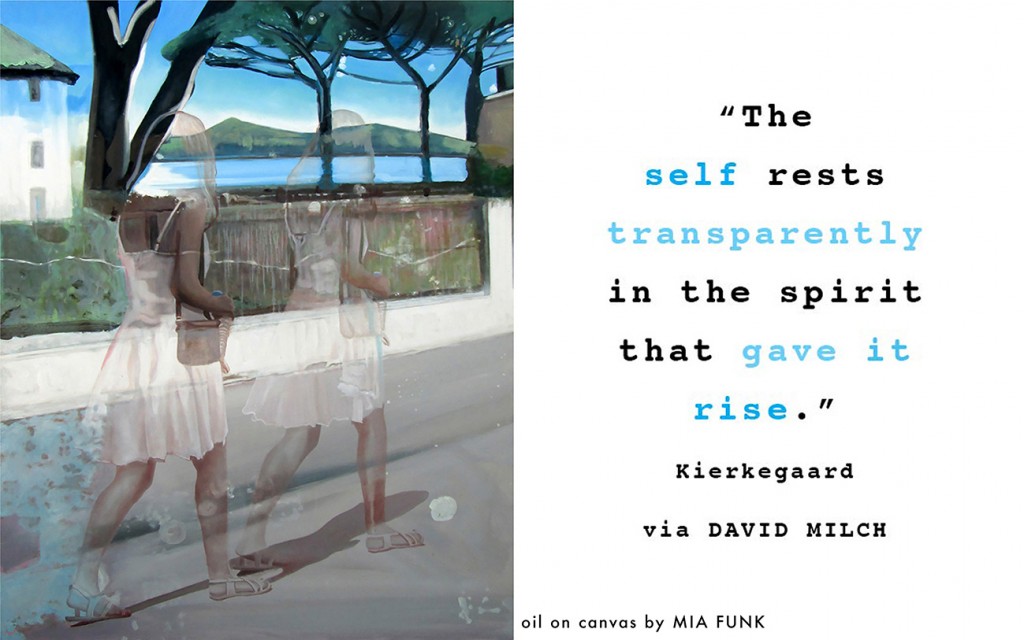 TH: You recently mentioned to me a Kierkegaard quote you’d discovered via the American writer David Milch: “The self rests transparently in the spirit that gave it rise.” In a lot of your work, both for The American Writers Museum and otherwise, there’s a very affecting sense of transparency, layers of underpainting that leave the feeling of hazy memory or a partially obscured timeline. Is there a relationship there to narrative, to the obscuring and excavating work writers do?

MF: Yes, well, I’m very interested in those themes that occupy writers: childhood, memory, looking back and the search for lost time. I like to think of my paintings as stories that aren’t quite complete but complete in the mind of the viewer. The quality of the best stories is that they do not leave everything resolved, but suggest a scene which is about to take place but we never see.

TH: So how big will this group portrait be? The hardest part must just be narrowing down the writers who will appear.

MF: That is one of the things still being decided. One idea is that it may need to be a triptych. Of course, it is not possible to contain the richness of American literary history in a single painting. For that, you really need to go back to the individual books, but what I hope to do is hint at its immensity. If a painting could be part of young reader’s first introduction to Faulkner or Hemingway, James Baldwin or Flannery O’Connor or Mark Twain, pointing them to read their works, that would be wonderful.

I am delighted to be doing these paintings for the American Writers Museum and to be involved in such an educational endeavor. And I’m really excited to be doing this series of interviews and artworks for Tin House which allows me to approach portraiture in a new way.

Mia Funk is an artist and writer who teaches at the École de Dessin Technique et Artistique, Paris. Her work has received many awards & nominations, including a Prix de Peinture (Salon d’Automne de Paris), Thames & Hudson Pictureworks Prize, Sky Arts Portrait Artist of the Year, KWS Hilary Mantel Short Story Prize, Doris Gooderson Prize, Momaya Prize & Celeste Prize. Her paintings have been shown at the Grand Palais and are held in several public collections, including the Dublin Writers Museum. She is currently completing a novel and a collection of linked short stories. Catch her on Twitter: @miafunk.

An Accident with Intentions: An Interview with Luke Goebel