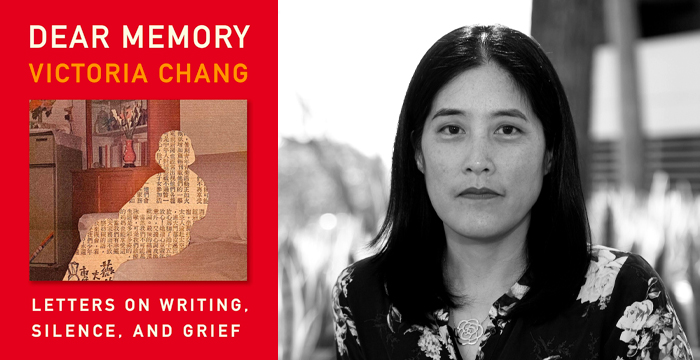 Poet Victoria Chang talks about her latest and most uncategorizable book Dear Memory: Letters on Writing, Silence, and Grief. A book composed largely of essay-like letters, Dear Memory also contains collages by Victoria, created from the artifacts (mementos, documents, photographs) found in her family’s storage locker, and short poems which she places among the images. What does this formal shapeshifting tell us about this project? How are form and identity related? What does changing form (in this case from poetry to prose) reveal about the self? What role does imagination play in memory? What is post-memory and how does one write into memories that one didn’t have oneself but which nevertheless cast a shadow under which one’s life has been shaped? What does it mean to put language at risk and how does one go about doing it? Is it possible that constructing a self comes not from striving toward wholeness, but from entering the gaps, the silences, the severance, and departures from which one comes?

Today’s conversation invokes the thoughts and work of many other writers (from Brandon Shimoda to Don Mee Choi to Theresa Hak Kyung Cha to Rick Barot). You can check out all the books mentioned (by both Victoria and others) at today’s episode’s BookShop.

For the bonus audio archive Victoria adds a reading from her forthcoming collected The Trees Witness Everything as well as a short discussion of writing using constraints, talking about the multiple constraints that produced the tiny poems in this very different upcoming collection. You can find out how to subscribe to the bonus audio as well as about the other potential benefits of becoming a Between the Covers supporter at the show’s Patreon page.