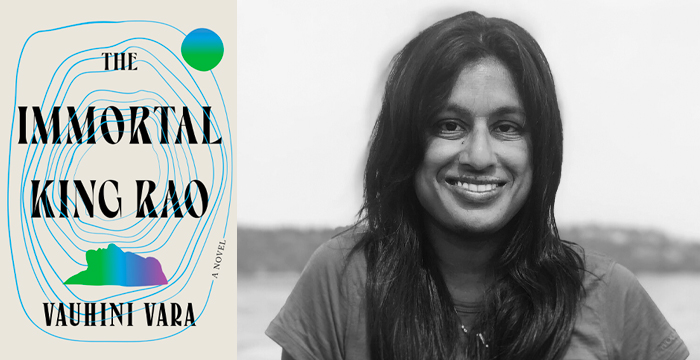 The Immortal King Rao is somehow three narratives in one, a historical novel set within a Dalit community in 1950s India, a near-future tech dystopia on the islands of the Puget Sound near Seattle, and an immigration story from the former to the latter. As a technology reporter herself, Vauhini Vara is interested in artificial intelligence in relation to writing and narrative, and she has found an ingenious tech-assisted point of view to tell this story of India and the United States, of caste and capitalism, of corporate governance and the anarchist resistance to it, in the most novel of ways.

This may be the only podcast you listen to this year where pneumonoultramicroscopicsilicovolcanoconiosis, the longest word in the dictionary, is spoken. Surely it is the only one that looks at everything from artificial intelligence to anarchism, Ambedkar to Gandhi, global capitalisms to global feminisms, and questions of representation, diversity, and erasure within everything from technology itself to whose stories get published and read.

During today’s conversation Vauhini mentions many books by Dalit authors (as well as books about Taoism and anarchism and capitalism) and we’ve collected many of them in today’s Bookshop. Vauhini’s contribution to the bonus audio archive is also of note. She reads from and discusses her award-winning essay “Ghosts,” which engages with an artificial intelligence called GPT-3. Vara believes it is a technology that could be useful for writers that are having trouble finding the language for something that defies words, much as her engagement with GPT-3 helps her find a way into the grief she felt about losing her sister, something until then she had been unable to write into. This joins bonus audio from so many others: from Viet Thanh Nguyen reading and discussing Maxine Hong Kingston to Ted Chiang reading his essay on why Silicon Valley fears super-intelligent A.I.  You can find out more about subscribing to the bonus audio and about the many other potential rewards and benefits of becoming a listener-supporter and joining the Between the Covers community at the show’s Patreon page.