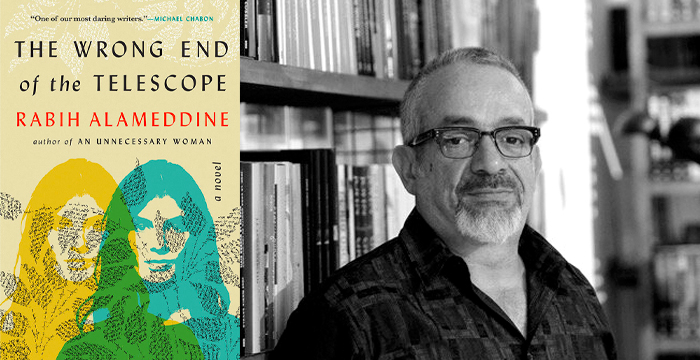 Rabih Alameddine talks about his new novel The Wrong End of the Telescope, which is set on the island of Lesbos amidst the medical personnel and tourist-volunteers involved with helping the arriving Syrian refugees. Interestingly, the writer, one suspiciously similar to Rabih himself, is a secondary character in this novel, a character who asks Mina, a Lebanese-American doctor, to tell this story, to be the narrator, because the writer is too undone by the situation to do so. We talk about narrative distance, about how to find what Rabih calls “the Goldilocks distance” not too enmeshed, not to detached, to be able to effectively tell a story that needs to be told. We talk about the power and limits of literature, of empathy, of volunteerism, about why each of Rabih’s books is a rebellion against the one before, about how to write without relying on the reader’s preexisting emotions and why one might want to do so.

The Bookshop for this episode contains most of the books mentioned today (from Vivian Gornick to Elisa Gabbert to Italo Calvino, and of course most of Rabih’s books that we talk about today too). It is a nice way to support the show, the writer, and independent bookstores, all in one gesture.

For the bonus audio archive Rabih contributes a brief discussion and reading of a favorite poem of his by Fernando Pessoa. To find out about how to subscribe to the bonus audio and about the other potential benefits of becoming a supporter of the show head over to the Between the Covers Patreon page.