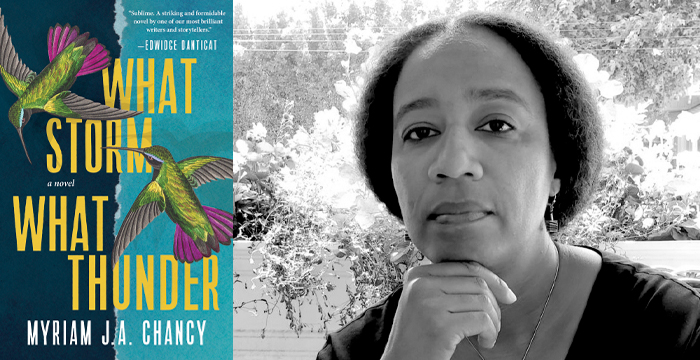 Haitian-Canadian-American writer Myriam Chancy is an acclaimed novelist but she is also a literary scholar who studies, among other things, storytelling. As a scholar instrumental in inaugurating Haitian women’s studies as a contemporary field of specialization, and one who has argued that much of Haitian women’s literature should be viewed through the lens of the novel as revolutionary tool, we talk today to Myriam about her own latest novel, a polyvocal choral work that takes place just before, during, and just after the 2010 earthquake in Haiti, What Storm, What Thunder.

It is impossible however, to talk about the earthquake, why it had the impact on Haiti that it did, why the aid produced so little long-term change, and how the world viewed Haiti in the aftermath of its worst tragedy, without also talking about the stories forever told about Haiti, stories told ever since it became the first Black republic in the Western hemisphere, a successful revolution led by slaves that sent shudders through the slave-holding nations of the world, from America to France. What are these stories about Haiti, the stories of it as a “cursed nation,” what do these stories tell about the storytellers? What lesser known stories, what true histories, do these stories hide or erase? And how are stories by Haitians themselves, particularly by Haitian women, revolutionary tools?

For the bonus audio archive Myriam Chancy alternates between reading from Jamaica Kincaid’s A Small Place and talking about its importance for us. It is immediately apparent, even if she hadn’t mentioned it at the onset, that she teaches this text, that she knows it well. She alternates between reading passages and then extended commentary and then returns to the reading and comments again, commenting on what it illuminates not just about Antigua but about Haiti, and not just about what she loves about Kincaid’s writing but how it has influenced her own writing in her most recent novel. This is one that I think warrants multiple listens. To find out more about how to subscribe to the bonus audio and the other potential benefits of becoming a listener-supporter of the show head over to the Between the Covers Patreon page.