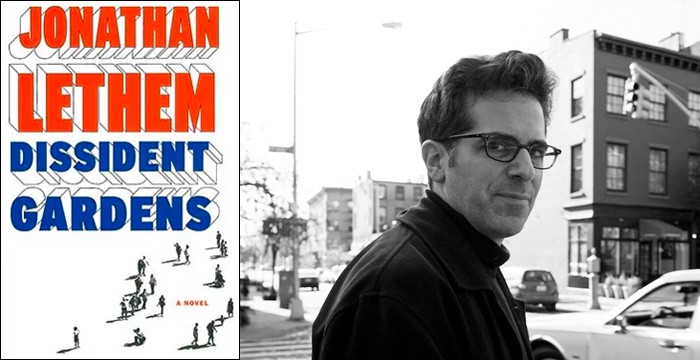 Jonathan Lethem is a man of many lives. For one, because of his repeated return to New York as both setting and muse in novels such as Motherless Brooklyn, Fortress of Solitude, and Chronic City, he may be New York’s closest thing to having a bard. But Lethem is known as well for his genre fiction, his hard-boiled detective and science fiction books, his revival of the Marvel comic Omega the Unknown, and for editing the Library of America’s four-volume edition of Philip K. Dick’s novels. Yet another side of Jonathan Lethem is that of essayist on music and culture, with books about John Carpenter, the New York Mets, and the Talking Heads, with his remarkable Rolling Stone interview of Bob Dylan, and a profile of James Brown that the New York Times says “stands as the best writing ever about the greatest musician of the post-World War II era.” Given all of these accomplishments, it is no small thing that many call Lethem’s latest novel, Dissident Gardens, his best. Spanning three generations and eighty years, from the Jewish communists of Queens in the 1930s, to the folk revivalists of Greenwich Village in the 60s, to the modern-day Occupy movement, Dissident Gardens is both an intimate and epic portrayal of the American Left, of American Jews in the twentieth century, and of one family’s quest for transformation and self-reinvention one generation to the next.