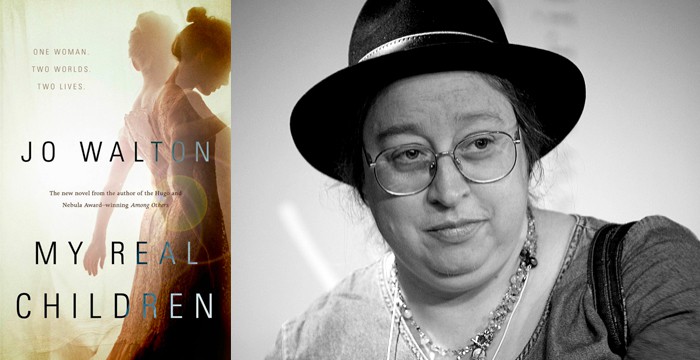 It’s 2015 and Patricia Cowan is very old. “Confused today,” read the notes clipped to the end of her bed. She forgets things she should know—what year it is, major events in the lives of her children. But she remembers things that don’t seem possible. She remembers marrying Mark and having four children. And she remembers not marrying Mark and raising three children with Bee instead. She remembers the bomb that killed President Kennedy in 1963, and she remembers Kennedy in 1964, declining to run again after the nuclear exchange that took out Miami and Kiev. Two lives, two worlds, two versions of modern history. Each with their loves and losses, their sorrows and triumphs. Jo Walton’s My Real Children is the tale of both of Patricia Cowan’s lives . . . and of how every life means the entire world.

“It explores issues of choice and chance and destiny and responsibility with the narrative tools that only science fiction affords, but it’s also a deeply poignant, richly imagined book about women’s lives in 20th- and 21st-century England, and, in a broader sense, about the lives of all those who are pushed to the margins of history: the disabled, the disenfranchised, the queer, the lower middle class.”—Publisher’s Weekly, signature review