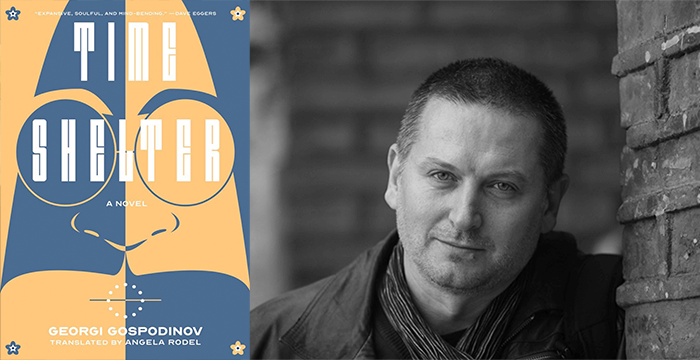 Today’s guest, Bulgarian novelist, storyteller, poet, essayist, and more, Georgi Gospodinov, is the perfect writer to bring in the new year. Gospodinov is a writer obsessed with beginnings and endings, with time, history, imagination, and memory. A writer raised on the stories of his grandmother, on the fantastical tales of Márquez and Borges, on the notion that stories themselves can not only comfort and console, but sometimes save a life. His latest novel, Time Shelter, translated by Angela Rodel (who is part of today’s conversation), is about the comforts and dangers of the past, of nostalgia, and what happens to a country, to a world, when the future feels canceled and we look backward for somewhere to live. As Bulgarian translator Izidora Angel said in her review of the book: “Beneath the book’s speculative façade, it’s also clear the author is meditating on his own legacy as a man of words within it. Real, bloody conflict exists but something else is eating away at us too—a critical depletion of empathy, a critical mass of meaninglessness, as Gospodinov has called it, and it is the job of writers to counter these metaphysical but no less real dangers. Words are time shelters too—living, breathing portals to memory, experience, and history, archives and blueprints all at once.”

For subscribers to the bonus audio archive, there is a supplementary interview with Georgi’s translator, Angela Rodel, about the questions and conundrums of translation that arose with Time Shelter, about how Gospodinov’s work is distinct within Bulgarian literature, and about her own artistic pursuits beyond translation, from starring in Bulgarian films and television to performing in a Bulgarian folk-rock band and more. This joins other long-form conversations with translators of other previous guests including Megan McDowell translating Alejandro Zambra, Ellen Elias-Bursać translating Dubravka Ugrešić, and more. To learn how to subscribe to the bonus audio and the other potential benefits of joining the Between the Covers community as a listener-supporter head over to the show’s Patreon page.