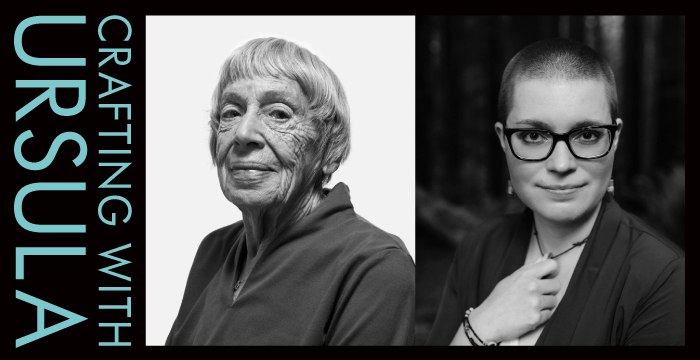 Today’s guest, Becky Chambers, discusses her own work, and her own considerations when imagining alien cultures and the beings that inhabit them. She does this in light of Le Guin’s novel The Left Hand of Darkness and Le Guin’s short story, “Coming of Age in Karhide,” written by Le Guin 25 years later, but within the same world as the the novel. What does putting these two narratives side by side tell us about storytelling, about audience, about otherness, about the author herself? And what does it mean to imagine worlds not through the science of physics but through the science of culture and the science of bodies? What can be gained by decentering (or even disposing of) plot, conflict, or heroes? And what are the biological and technological considerations one might think about when imagining a future or the beings that might inhabit it?

If this first episode of Crafting with Ursula is your first encounter with the Between the Covers podcast, you can sort the show’s archive by genre, foregrounding, if you desire, all the past science fiction and fantasy conversations with everyone from Ted Chiang and N.K. Jemisin to Neal Stephenson, Daniel José Older, and Kelly Link. All the books mentioned in today’s conversation with Becky Chambers can be found at the show’s BookShop (a nice way to support the author, the show, and independent booksellers all at the same time).

To learn more about the potential benefits and rewards of becoming a listener-supporter of the show, from rare Le Guin collectibles to becoming an early reader for Tin House, head over to the Between the Covers Patreon page.