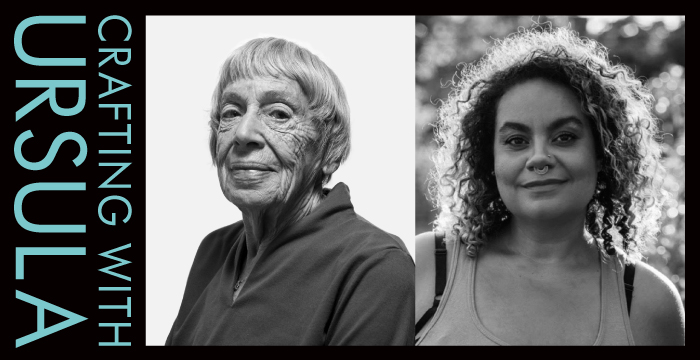 Today’s conversation with adrienne maree brown begins with the notion that all organizing is science fiction, and thus that social justice and science fiction are intricately linked imaginative acts, acts that have real effects in the world at large. brown looks at works by Le Guin that she considers foundational texts for activists and organizers, and discusses what it means to do the work of imagination, as well as the dangers of not doing that work, of living within a world imagined by others, people who might not fully imagine you. Many of adrienne’s concepts, from ‘emergent strategy’ to ‘fractal responsibility,’ are linked to everything from Le Guin’s interest in anarchism to their shared interest in Taoism.

If you enjoyed today’s conversation consider becoming a supporter of the show. Check out all the possible rewards and benefits of doing so, from rare Le Guin collectibles to access to bonus audio by Ted Chiang to N.K. Jemisin, to becoming an early reader for Tin House, receiving books months before they are available to the general public by going to the show’s Patreon page.

Lastly, here is today’s Bookshop, which contains the books by Le Guin mentioned today and many of adrienne’s books, from her debut novel Grievers to her books on social activism to the anthology she coedited, Octavia’s Brood.