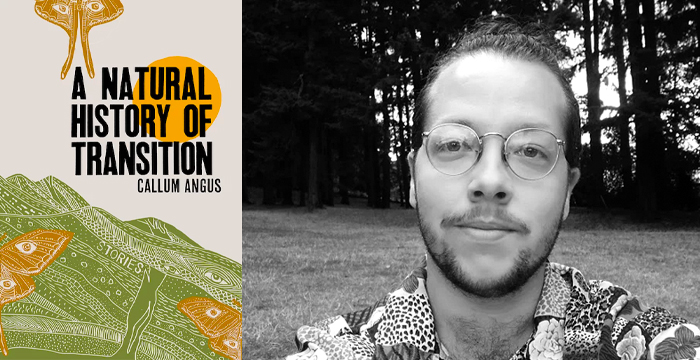 Callum Angus’s A Natural History of Transition is described as a collection of short stories “that disrupts the notion that trans people can only have one transformation.” Angus talks about trans narratives, both the ones most commonly seen in the culture at large, and his notion of transness, not as a journey between two static gender poles, by a person “trapped in the wrong body,” but one of continual adaptation, reevaluation, and renewal. Callum Angus is particularly interested in the intersections between trans writing and nature writing. As the editorial statement for the journal he founded, smoke and mold, says: “The trans body is considered ‘unnatural,’ its changes supposedly go ‘against nature,’ with few in mainstream literature, medicine, or history acknowledging that nature is nothing but change.”

We talk about why he chose to write fiction versus nonfiction, and chose fantastical fiction over realism, as the best way for him to explore transition in his protagonists and transition in the world at large. What does a story collection look like written by an author who isn’t trying to “tell a good story” but rather resist it? An author who thinks there is much power for ill in linear narratives and too-powerful stories? What possibilities open up for the short story form, for nature writing, for our understanding of the human within the larger natural world, when looked at through a trans lens?

We talk about many other writers in this conversation, from Rikki Ducornet to Mattilda Bernstein Sycamore, Reinaldo Arenas to John Keene. Keene’s Counternarratives was a particular inspiration for Angus’s new book and for the bonus audio archive Angus reads the short story “Mannahatta” for us. This joins bonus readings from John Keene himself, CAConrad, Garth Greenwell, Carmen Maria Machado, and many others. To find out how to subscribe to the bonus material and to check out the many other potential benefits of transforming yourself from a listener to a listener-supporter head over to the Between the Covers Patreon page.