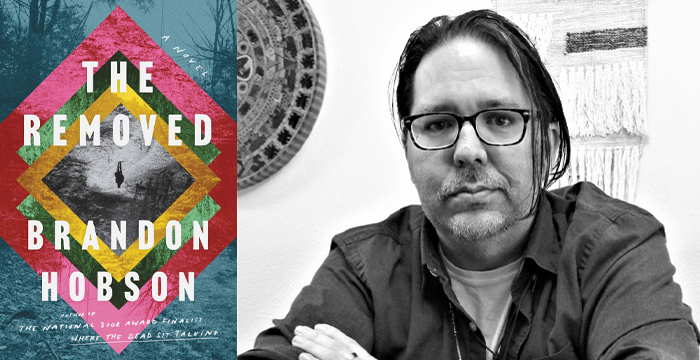 Today’s Between the Covers conversation with Brandon Hobson is about his novel The Removed, his first book since his National Book Award finalist, Where the Dead Sit Talking. The Removed places us with the Echota family fifteen years after the death of their son Ray-Ray at the hands of the police, and in the long shadow of the forced removal of the Cherokee from their ancestral lands to modern-day Oklahoma where the book takes place.

We talk about writing into the silence surrounding police killings of Native people, writing against stereotype, against the expectations of the non-Native imagination, about the foster care system and its legacy in Native communities, and also about questions of form and language. Brandon talks about the influence Diane Williams has had on him on the sentence level. And if you are looking for a deep dive into syntax and the sentence, there is probably no better episode to go to after this than her past appearance on the show.

For the bonus audio archive Brandon Hobson reads from “The Man Came to Visit Us,” the lead story in the latest issue of Noon, Diane Williams’ magazine, where Brandon frequently appears. To learn more about how to subscribe to the bonus audio and the other potential benefits of becoming a listener-supporter, from joining our collective brainstorm which is shaping who we invite as guests going forward, to receiving resource-rich emails with each episode, to collectibles from your favorite writers, to becoming an Early Tin House Reader, receiving twelve books over the course of the year months before the general public, head over to the Between the Covers Patreon page.