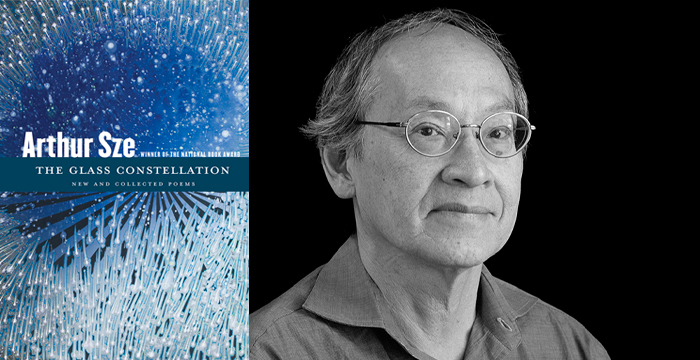 Arthur Sze, winner of the 2019 National Book Award in Poetry for Sight Lines, joins David Naimon to discuss his latest book, The Glass Constellation: New and Collected Poems. Together they step back to take in a half century of Arthur’s work, not only how it has changed and why, tracking the growth of a poet and person across time, but also what animating questions, despite all the changes, have endured. They also step forward and look closely at questions of selfhood in relationship to poetry, how one decenters the controlling self when writing (and to what end), the place of the human in the more-than-human world, the relationship of the image to the word,  and what it means to aim to write as if there is no hierarchy between any one word and another. Arthur also talks about the role of divination, particularly the I Ching, in the crafting of some of his poems, and his engagement with everything from quantum physics to Native American cultures and languages (as professor emeritus at the Institute of American Indian Arts his students included Layli Long Soldier, Sherwin Bitsui, Orlando White, Santee Frazier, and dg nanouk okpik, among many others), as part of his poetry and poetics.

When Arthur has felt the need to grow as a poet, to break out of well-worn patterns of writing, but hasn’t known how or in what way to do so, he has often turned to translation as a way to move his writing into a new phase. In the main conversation we discuss the four different periods of translation for him over the past fifty years, the Chinese poetry he chose to translate in each era to help move his poetry forward. For the bonus audio archive Arthur introduces us to and reads some of the translations themselves, translations of poets from the Tang Dynasty, Chinese modernist poetry, and poems by contemporary Chinese poets. I encourage you to listen to the bonus audio after hearing our conversation as you’ll then really be able to track Arthur’s own development as a poet while listening to the poetry of others, both translated and read by him. To find out how to subscribe to the bonus audio and the other many potential benefits of becoming a listener-supporter of the show head over to the Between the Covers Patreon Page.