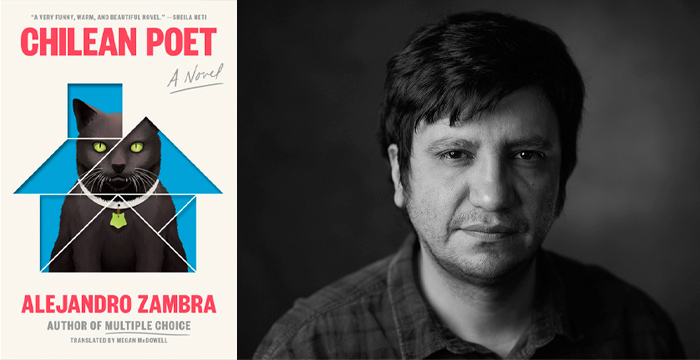 Today’s guest is Chilean novelist, essayist, literary critic, and poet Alejandro Zambra, talking about his latest novel Chilean Poet, a novel brimming over with, yes, Chilean poets and poems, but also with love and laughter, artistic dreams and failures, and the desire to find language for things deeply felt that have no name. This conversation, one about everything from writing itself to translation, cats to parenthood, Mexico to Chile, Roberto Bolaño to Nicanor Parra, and poetry to prose, is ultimately one wondrous love letter to literature, those who make it and those who read it.

Whenever a guest comes on the show for a book they wrote in another language than English, I try to do a second long-form conversation with the translator for the bonus audio archive. The bonus audio (one of the potential benefits of becoming a listener-supporter of the show) is full of a wide variety of supplemental material (from readings to craft talks) but the most robust material, often hour-long conversations, are these conversations with translators. These include Sophie Hughes (translating Fernanda Melchor), Kurt Beals (translating Jenny Erpenbeck), Suzanne Jill Levine (translating Cristina Rivera Garza), and Emma Ramadan (translating Abdellah Taïa). Today’s translator conversation is with Megan McDowell, who has translated Alejandro since his 2nd book and who translates many other South American writing luminaries (e.g. Samanta Schweblin and Mariana Enriquez).  To learn more about the potential benefits of becoming a supporter of the show, including the bonus audio, head over to the Between the Covers Patreon page.

And here is the Bookshop for today’s conversation with many of the books mentioned during it.