“There are any number of highbrow authors who will ridicule this invention in the public and use it in private.”

Picture a man and a woman walking through a thick fog in London.  The year is 1926.  They are in love, and they are miserable.

The man, a promising young director on one of his first projects, has just been told by studio executives that his newly finished film will almost certainly be shelved.  It is too depressing, too disturbing—too frightening.  In love with his production assistant and hoping to marry her, the would-be groom now suspects his directing career is already over.  So the two stroll for hours in the fog, aimless, not knowing what final decision to expect from the head of the studio.

“As a lifelong purveyor of suspense, so called,” Alfred Hitchcock would later muse in a 1970 interview, “I have never before and have never since endured such suspense myself.”

The film—a dark thriller based on Jack the Ripper called The Lodger—was indeed released in the end.  With it, Hitchcock’s career truly began, and eventually grew and crossed the Atlantic altogether.  Before the big jump to Hollywood, though, he studied up a little further on plotting.

“I sent from England for an American book,” he recalled, “called Plotto.”

Tearing open that package from overseas, Hitchcock might have recognized a formulation of his own youthful trials right in Plotto‘s opening pages:

1. To Achieve Happiness in Love and Courtship.

2. To Achieve Happiness in Married Life.

3. To Achieve Happiness (Success) in Enterprise.

Hitchcock did marry his beloved and did succeed in his enterprise—but he nothing was quite so memorable as those obstacles in between, or the conflict they’d created.  It was a hard-won insight that Plotto‘s author had long since arrived at himself. 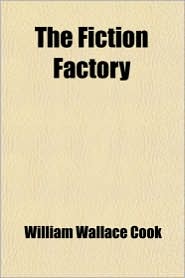 William Wallace Cook (1867–1933), known in the pulp community as “the man who deforested Canada,” spent decades pursuing his own peculiar version of “Success in Enterprise.”  Working under an array of pseudonyms—he even used one on his own memoir, The Fiction Factory—Cook pumped out hundreds of nickel and dime novels over a forty-four-year career.  In 1910 alone, he conjured a staggering fifty-four nickel novels, or just over one a week.  At times, Cook would pound out an entire manuscript in a twenty-four-hour marathon session.  Each production, though, was always carefully molded into the same 40,000-word format of sixteen chapters of five single-spaced pages each.  At one point, Cook calculated he’d worn out over twenty-five typewriters in as many years, frantically clacking out everything from romances (Little Vassar Girl) to science fiction (A Round Trip to the Year 2000) to Westerns (Jim Dexter, Cattleman).

“A writer is neither better nor worse than any other man who happens to be in trade,” he explained.  “He is a manufacturer.”

The comparison was apt: with the rise of high-speed presses and railroad distribution, writing was an industry.  The masses wanted literature that was cheap, potent, and reliably satisfying—and to meet that demand, Cook couldn’t rely on anything so capricious as artistic inspiration.  He needed to systematize fiction so that nearly anything within his grasp could be readily converted into narrative—including the system itself.

And so as Cook eased into old age in the same Michigan home he’d occupied for three decades, he decided his system of storytelling would become—what else?—another book.

“FIRST AID TO TROUBLED WRITERS,” the Boston Globe announced in September 1928—“MACHINE GRINDS OUT PLOTS WITHOUT ANY FALSE START.”

The subject of the article was not really a machine at all, but a book—which, unveiled in Manhattan at the Plotto Studio of Authorship at 1658 Broadway, was announced as “Plotto, an invention which reduces literature to an exact science.”

If it’s neither a machine nor quite an exact science, Plotto does have a machine-like logic to it. It is a plot generator, Cook explains to the reader, built around three essential elements: the protagonist, the conflict situation, and the resolution.  With thousands of variants and subroutines on these three elements, at first glance the entries within resemble some utterly mad thesaurus:

A has invented a life preserver for the use of shipwrecked persons * A, in order to prove the value of the life preserver he has invented, dons the rubber suit, inflates it and secretly, by night, drops overboard from a steamer on the high seas ** (1414b) (1419b)

The notion of fundamental plot elements wasn’t a new one—back in 1894, French critic Georges Polti had identified thirty-six plots that he claimed all drama derived from.  But Cook now went much further.  By varying the combinations of such elements, the Globe explained, “it is possible to develop several million original works.”  While one might wonder just how original those works might be, Cook’s Manhattan representative was unperturbed by any criticism that the book was formulaic.

“There are any number of highbrow authors who will ridicule this invention in public and use it in private,” he scoffed.

In fact, some authors were using it.  Along with the midtown Plotto Studio, Olivet College in Michigan had adopted Plotto as a textbook—while in Indiana, an attorney bought a copy to break out of the grind of his law office.

“I used Plotto to find out what a plot was and how to build it,” Erle Stanley Gardner later explained. “I secured data from it which has been worth a great deal to me.”  He was not speaking idly: as the creator of Perry Mason, the former lawyer sold 170 million books in America alone within his lifetime.

As with any valuable industrial process, others tried to mimic Plotto.  In 1931, magazines announced the debut of the Plot Robot, a contrivance by Hollywood screenwriter Wycliffe Hill. An photograph accompanying one article shows a tin man with a disturbingly fixed smile—”a mechanical robot that turns out plots for brain-fagged authors,” Popular Science reported, in a mere “twenty minutes, to the accompaniment of whirring gears.”  What readers received in the mail, however, was a plot book and a cardboard-wheel calculator that randomized nine different plot elements.  It was, in short, a literary slide rule.

“It may or may not have been a mistake, to give the name ‘Plot Robot’ to the device,” Hill later admitted, “inasmuch as it is not really a robot.”

Plotto proved popular enough to go through multiple editions: it soon outlasted Cook himself, with an additional instruction book being issued in 1934, and a combined edition in 1941. But if Plotto and Plot Robot promised the literary process of the future, by the postwar era those plots were beginning to sound curiously like the past.

Examining these guides in 1958, the mathematician Martin Gardner found himself reminded of the concentric wheel charts created by the 13th thirteenth century Spanish logician Ramon Lull.  Plotto, he argued, “was essentially Lullian in its technique of combining plot elements.” There is indeed something almost medieval about the process: first one lays out certain premises as unquestioned truths, and from there builds a wildly complex philosophical mechanism around it.  Plotto resembles nothing so much as those Ptolemaic globes that use gloriously elaborate gear works to explain the motion of the heavens as they wheel around an unmoving eEarth.

Like those antique globes, old copies of Plotto now fetch a small mint when they go up for sale.  There is a fascination to them, a joy in beholding their wildly overcalculated archaisms.  Even by 1970, when Erle Stanley Gardner’s own fiction factory had turned its last gear, and a exhausted-sounding Alfred Hitchcock was being interviewed by sharp young reporters, it seemed that the old verities in their copies of Plotto had vanished.

“Easy Rider. . .” Hitchcock mused in amazement.  “The chaps sell dope.  That’s the sort of thing we used to put in for villains to do.”

Far less has changed in plotting than Hitchcock might have feared, but a world that also included antiheroes, irony, and metanarrative simply made no sense in Plotto‘s cosmology.  And yet I suspect that, inveterate writer that he was, William Wallace Cook himself would have scarcely flinched.  It’s just another story: a magnificent old craftsman becomes bewildered by new art that is inexorably leaving him behind. Why, that’s the very stuff of tragedy itself.  Cook would have taken the confusion around Plotto and made that into his next story—and why not?