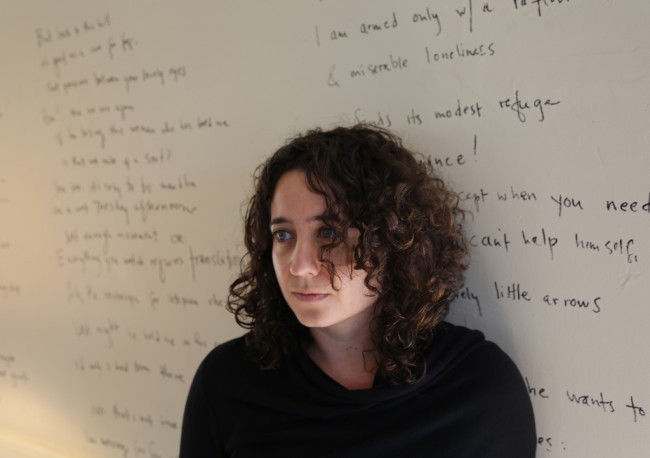 This summer, I received a galley proof of Claudia La Rocco’s selected writing called The Best Most Useless Dress. Scrolling through pages of text, I thought to myself, this is some Frank O’Hara shit.  The first line of the epigraph read: I am the least difficult of men.

In graduate school we read O’Hara’s criticism and went for picnics on his grave. We need someone like him again.

The first time I met Claudia La Rocco was at an Italian restaurant in Bed-Stuy one July afternoon. I was exasperated. I lamented the nightmare of looking for an apartment in New York. Claudia doesn’t remember asking me to describe the quality of the nightmare and I don’t remember how I answered but we ended up being neighbors later that summer and I see now the kind of sacred attention Elizabeth Robinson describes in her introduction to the book.

I hope this interview matches the sophistication and sincerity of Claudia’s work, while communicating my ineffable admiration.

Whiskey Blue: In the introduction to The Best Most Useless Dress, Elizabeth Robinson asks, “what is it to be swept up passionately but uncomprehendingly in art without controlling its meaning?” Robinson (and I would posit your work, too) looks to not knowing as a mode for interacting with art. This unknowing describes a state of utmost attentiveness; of simultaneous blankness and hyper-engagement which Robinson calls “deep attention, writing that such attention, deep attention, redounds once again to desire.”

I want to know what it means to you, to be “swept up passionately but uncomprehendingly in art without controlling its meaning.” How would you describe the quality of this swept up-ness? How do you, as a critic and as an art maker, access this state? And how do desire and not knowing interact here?

Claudia La Rocco: The quality, it’s luscious. Whether it’s by art or a stranger or sleep or the tennis stroke whose perfection you cannot explain, even though it was yours—what is better than being swept up? I’m writing slowly and when I stop I notice that I am rubbing my finger tips together—so I guess I would also say that it’s tactile. Its itness is tangible, even if you can’t grasp it. I am not sure there is a way to ensure that you can access it, but I think to give oneself time, and to give oneself over to things, are important preparatory steps. Time and attention, so you can slow down enough to see what’s floating around in your mind and in your surroundings, and look at how the two worlds intersect, and how they don’t. 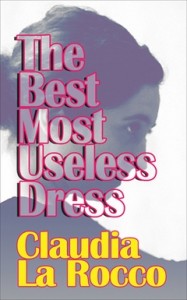 I always think about dating; how you can go on 100 dates and the first 99, they’re terrible, zero chemistry, you can’t even understand how people do this, or why … and then that 100th comes along. It’s so simple—could you explain why it works though? We resort to all the clichés about chemistry and timing. But, I don’t know. I think the fact that we can’t break it down is a big part of its magic. Desire and not knowing are both moments of immortality for mortals. Maybe they’re the same thing?

WB: Elizabeth Robinson also observes that there are “three formal strategies that recur throughout the book: parataxis, repetition, and theft.” When I read this, I thought it was an interesting insight into how, perhaps, you build your work; how you make a text; the way a choreographer approaches movement when making dance.

Parataxis is described as “the placing together of sentences, clauses, or phrases without a conjunctive word or words.” Would you agree that parataxis is a recurring strategy – to quote Robinson – in your work? For example, with a writer like Joan Didion, terseness and cadence come to mind when thinking about her style. Do you think your style is characterized by parataxis? Is this deliberate? If so, what does it serve?

CLR: What’s not to love about parataxis? Just the word itself … it’s beautiful. I love collage. I love the two things together that make a third thing.

I’m not sure what it serves, exactly. Maybe my adoration of parataxis comes from having to be a well-behaved journalist for the first part of my writing career. And also of course it’s a poet thing, a way to construct narrative that isn’t linear, that doesn’t depend on understanding step by step.

And of course choreography is shot through with parataxis. I mean, so much art … and I think one could make the case that this is simply because it’s a common way in which people seek to decipher experience. To translate it into manageable terms.

I think one could also make the case (I like making cases) that it’s a weakness of mine, or a limitation. That I might be well served by leaning on parataxis a little less. But I just like it so much. It’s a darling I’m not at this time prepared to kill.

CLR: Nature repeats. How could we not?

WB: And the theft: who or what or where do you steal from?

CLR: Everyone. My family, passers-by, nature, advertising, etc. But especially myself. Least of all other writers, because one has to cite them and that’s not as much fun.

There often isn’t any difference between stealing and observing. Or, the difference is entirely connotative.

WB: How does The Best Most Useless Dress compare to what you imagined your first book might be?

CLR: I’ve had different ideas of what my first book would be. I think most recently I thought it would be a collection of poetry. I think one of the lovely by-products of being so widely published as a critic is that I didn’t have a lot of anxiety about being published in general. Which isn’t to say that I didn’t desire it. Only the need wasn’t pressing. This means, among other things, and happily for me (and the world), that I never succeeded in getting any of the very bad poetry I was writing in my 20s published. It could have been done, but I would have had to have tried very hard. Laziness has its benefits.

WB: The Best Most Useless Dress feels downright compassionate in its reverence of dance and performance, depicting dance-making as an art so terminally ephemeral that it borders on otherworldly. Reading along, I wondered if truly good work might actually be experienced as somehow divine. What transforms rote movement into a form of supreme eminence?

CLR: The ephemeral thing is tricky for me, because I really hate how dance’s impermanence becomes a fetish “object.” Human beings are ephemeral. It’s so stupid that we talk about other things as not lasting. The whole damn human situation is only available to us in the instant.

But. I also really like that dance makes this clear—it’s got no other material beyond time and space, so it can’t give the illusion of lasting as other art forms can sometimes do. And yes I for sure make too much of that (and sometimes slip into embarrassing romanticisms around it), but on some level I think it’s important maybe to overemphasize it. It has a political dimension that pleases me.

So I would say that, far from being otherworldly or divine, dance is the most rooted in daily existence. But also of course if there is anything like eternity or god or the divine I think it only exists in the moment. So … I am circling.

WB: In the essay “She Said, He Said”, you quote the choreographer Layla Childs who once told you that the recession wouldn’t matter terribly to her and her colleagues because dancers were “already living at a subsistence level.”

Your work often touches on the economics of dance, how “it’s all hopelessly romantic, in a desperate and cynical way – if there’s no money now, and there was never any money then and there’s not gonna be any money anytime ever, then what? Everything just for love? The margins hold the page.”

Do the margins really hold the page? If so, how does the industry survive?

CLR: The margins do hold the page. The page doesn’t necessarily acknowledge this, and certainly not until you turn to the next one, by which I mean to say that people doing interesting things often get fucked over while doing them. The world is paying attention to other things. Usually the wrong things. That’s kind of the point of the margins, right?

So, yes, I think it’s pretty clear to anyone with any sense that the entire funding system in the arts is appalling, despite being populated by a lot of people who are trying very hard to help other people.

But on the other hand … I think that people who are doing what they are doing in order to get somewhere or something are missing the point. And we’re in this weird place now where artists seem to want to critique the system and speak truth to power and la di da while still getting commissions. So. The system has its priorities all screwed up. But so do the individuals. Maybe we’re made for each other.

All of which is to say, I’m not sure I can answer your question at this time.

Claudia La Rocco is a poet, critic and teacher whose work frequently revolves around interdisciplinary projects and performances. La Rocco founded thePerformanceClub.org, which won a 2011 Creative Capital/Warhol Foundation Arts Writers Grant and focuses on criticism as a literary art form. She is a member of the Off the Park poetry press, for which she edited I DON’T POEM: an anthology of painters, and contributes frequently to the New York Times and ARTFORUM. She is on the faculty of the School of Visual Arts’ graduate program in Art Criticism and Writing, teaches at such institutions as Stanford University and Movement Research and has performed and read at such places as The Kitchen, Danspace Project, The Center for New Music, Abrons Arts Center and the Mount Tremper Arts Festival. The Best Most Useless Dress (Badlands Unlimited, 2014) encompasses a decade’s worth of poetry, essays, performance texts and reviews.

Whiskey Blue is the author of Brooklyn Love. She blogs for Psychology Today and writes an advice column at Everyone Is Gay. Her work has appeared in The Atlantic, The Believer, Tin House, Ms. Magazine, Bitch, Slice, Hobo, and elsewhere.

Being There: An Interview with Robert Stone