Cross-legged on the sidewalk of Rustaveli Avenue, a teenager in a Jim Morrison t-shirt strums his guitar. On a window of the Entreé cafe a peeling tourist advertisement reads, “Tbilisi: The city that loves you.” Pink heels rush past a Roma toddler who sleeps beside a bowl half full of tetri coins, undisturbed by the vendors haggling over metalware, jewelry, portraits of Marilyn Monroe. In Freedom Square I give a line of Georgian script to a taxi driver who nods and starts his car. We speed through Merab Kostava, past the Ilia State University, down Dimitri Arakishvili. As the taxi drives away I walk up the steps to the final stop on my journey, the Eliava Institute.

I had come to Tbilisi to conduct graduate research on the history of medicine. Some medical treatments succeeded in the Soviet Union but failed in America in the early 19th century, and I wanted to know why. I interviewed researchers, sifted through old Russian papers and textbooks, talked to patients. And yet, I didn’t feel completely satisfied by what I learned. It wasn’t until I came home that I found the answer to my question in an unexpected place: American literature. In the 1925 novel Arrowsmith, Sinclair Lewis fictionalizes a contemporary scientific discovery in his story of a scientist who discovers “phage therapy,” a treatment that can be used as an alternative to antibiotics. This same treatment has been at the center of the Eliava Institute’s research for nearly a century.

In reading Arrowsmith, I found myself picturing Lewis’s scenes in a Georgian setting. When I read his description of a phage laboratory, I remembered white-coated Georgian researchers bending over microscopes and test tubes. When Dr. Martin Arrowsmith treats a plague-stricken population, I thought of the epidemiologists who travel across the Georgian countryside to vaccinate nomadic farmers. I felt like I was looking through a kaleidoscope – every time I added a piece of Arrowsmith to the science I’d seen in Tbilisi, I watched as shapes and colors coalesced into new patterns I hadn’t considered before. I had always thought of science and literature as parallel disciplines, since they both examine the world and our place in it, but I hadn’t realized how much their intersection could teach us. 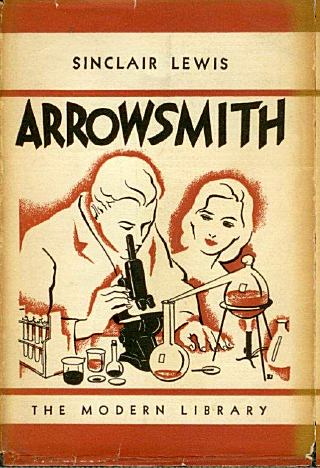 Even before Georgia and Arrowsmith, I insisted on studying the arts and sciences in tandem. In my last semester as an undergrad, I had a Renaissance drama seminar that ended ten minutes before my infectious disease lecture began. (Between the two, I learned more about syphilis than I imagine anyone really needs to know.) I felt divided between the two disciplines, so I turned to my Latin classes (yes, another instance of my lifelong dedication to practicality) to see if I could tease out the origins of this division. The root of the word “science” is the Latin verb “scire,” which means “to know.” In my science courses, I felt distinctly that my professors considered science to be a search for knowledge untainted by the cultural trends and human passions that plagued the humanities and so disqualified them from the pursuit of truth. “Literature,” conversely, comes from the Latin “litera,” or “alphabetic letter, writing.” From literature classes and discussions, I was taught that words are, in fact, ideas, representations of our perception. Words link us together in the present, and they allow us to study ideas of the past. Words are the closest thing we have to understanding ourselves and each other, and reducing the ideas they express to biological pathways and chemical equations disregards creativity, passion, beauty.

Given my own experience with intellectual division, I was able to empathize with Dr. Arrowsmith, who spent his college years struggling between two modes of intellectual inquiry. He was at once encouraged to pursue truth in the “pure,” disinterested investigation of a research scientist and told that the “applied” work of a doctor was in fact a more honorable pursuit. He began his career as an idealistic medical student but, alas, was stricken by the one truly incurable malady – love. Marriage prompted practicality, and Arrowsmith spent years working as a doctor and public health official. He eventually returned to research and developed phage therapy, a treatment that uses bacteriophage (a virus that kills bacteria) to treat human bacterial infections. In this therapy, bacteriophage samples are collected from the environment and applied to the bacteria present in a given infection (e.g., a staph infection, salmonella, E. coli). Phages that work against the bacteria are combined in what is known as a “phage cocktail,” a collection of effective phages that is frequently updated as bacteria evolve. This cocktail can be consumed orally or even directly applied to an open wound.

Throughout his research in phage therapy, Arrowsmith struggled to reconcile his idea of “pure” research with the public image of science. He was committed to understanding the biological underpinnings of phage therapy, but he was also under pressure to commercialize this therapy in order to bring in grants and public acclaim for his research institution. This is no less of an issue today, as John Oliver recently emphasized when he discussed the inconsistency of scientific reports delivered to the public. For example, one such report claims that coffee can cure cancer; another claims it might kill you. Science is always changing, but consumers want absolutes, products, prescriptions. Arrowsmith is instructed to use phage therapy before he really understands how it works; his superiors tell him to think of the good he could do, the money he would make. Likewise, in the early 20th century, prominent American pharmaceutical companies such as Eli Lilly produced phage therapy and marketed it as a revolutionary panacea. But they were selling promises – in reality, their products rarely (if ever) effectively treated infections. Like the institutions in Arrowsmith, companies sold phage before they understood it. Given both this premature marketing and the advent of antibiotics, phage ultimately disappeared from American medicine.

In Tbilisi, I asked the Eliava Institute’s librarian Tsitsino about the story of phage therapy in the Soviet Union. At a table stacked high with research papers in Russian and Georgian, she told me how Georgiy Eliava was inspired to begin a research center in collaboration with the French-Canadian who discovered phage, Félix d’Herelle. However, Eliava was executed by the Soviets in 1937, just as d’Herelle was preparing to move to Tbilisi. Eliava was declared a “People’s Enemy,” though some sources claim that he had in fact had the misfortune to fall in love with a woman admired by a Soviet official. In the hands of the Soviets, the Institute was ordered to produce phage for soldiers and, after it proved effective, the government kept the Institute producing phage in enormous quantities. Even in the 1940s, when antibiotics were taking the West by storm, phage production continued in Tbilisi, perhaps because the government saw no need to replace an effective therapy, or simply because the Soviet regime didn’t have access to the reliable infrastructure and supplies that are necessary to mass produce antibiotics. 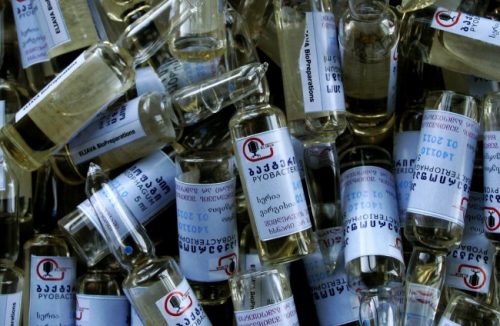 Virtually unknown to the West since its inception, the Eliava Institute has recently seen an influx of researchers seeking alternatives to antibiotic drugs. Several American patients have survived serious antibiotic-resistant infections because they received treatment in Tbilisi after American antibiotics failed to save them. As we consider adopting phage therapy, it is crucial for us to remember why phage was unsuccessful in America and develop strategies to improve collaboration between scientists, corporate and government officials, and the public. For this, we can look to books like Arrowsmith as windows into the place and practice of science in our cultural past.

Throughout my work in science – as an undergraduate student, a laboratory assistant, an international researcher – I was always taught to observe, to question, to take nothing at face value. When we arbitrarily separate science and literature, we limit our observations and restrict the imaginative potential of interdisciplinary collaboration. Science isn’t inherently disinterested and opaque; it is an exercise in human imagination and perseverance. And novels are not mere entertainment; literature expands an individual’s perspective and so directly and tangibly impacts our future. As Lewis demonstrates, non-scientists can learn about scientific principles and new discoveries through literature, and scientists can step back to consider the cultural and ideological milieu in which they practice. If we want to, as the saying goes, look at the forest beyond the trees of our own perception, it is most expedient to venture onto another branch of knowledge.

Carolyn Farnsworth is a copy editor at Springer Nature and a writer based in New York City. She studied biology and English at the University of Virginia, and plans to continue her work on examining the intersection between these two disciplines.