The summer I was twenty, I moved to Iowa City to go to graduate school. I had applied months earlier with three short stories, two of which I’d written in the forty-eight hours before the postmark deadline, having just realized most of what I’d originally planned to send was no good. At midnight on New Year’s Eve, my mother came downstairs with a glass of champagne and asked if I was sure this was a good idea.

I was not, but she proofread the new stories and told me I’d done it and drove me to the twenty-four-hour post office to mail my application, and a few months later there I was. I had a small paycheck and an apartment that was still being built when I arrived, meaning for a month I lived rent-free in a larger unit with other displaced tenants, including the reigning Miss Iowa. I had a great deal of confidence in my abilities and also a recurring nightmare in which I was summoned to the office and told gently that my admission was a mistake and I would have to go home.

I made friends mostly with black women who were attached to the university for other reasons. The first time I talked a friend into going to a workshop party, we drove through miles of cornfield to the farmhouse where a group of students lived, and were there only five minutes before she declared we needed to get back in the car and go home, because the occasion was a posthumous birthday party for Hunter S. Thompson and white people were shooting air rifles. I spent my twenty-first birthday at the Chili’s at the mall in Iowa City’s nearest suburb with a friend I saw as the intimidatingly glamorous older sister I’d always wanted. She had a wardrobe marked by dramatic draping, and gloriously picked-out hair, and drove a car with a Wild Women Don’t Get the Blues bumper sticker, though she peeled it off the next year. “It turns out,” she said, “that’s not true.”

My mother was my first audience. In high school I started reading books aloud to her. Before I got to college, this gave me my best preparation for what a workshop was—to read something, and then to step outside of your head and read it again, hearing it the way someone else would hear it. Betty Smith’s A Tree Grows in Brooklyn was the first book I chose to share: I picked it when I got to the part where Francie’s exiled Aunt Sissy puts an end to a teacher’s humiliating bathroom break policy by inventing a cop husband and indirectly threatening her. Though not white, and not as long ago as the book’s characters, my mother had grown up poor in New York City, too.

When my mother was five, a teacher sent her home from school for wearing pants. She waited hours in the rain because she wasn’t allowed to cross the major Bronx street between the school and her apartment alone and the crossing guard was gone until school let out. A concerned elderly woman tried to walk her home, but she refused to leave with a stranger. The stranger managed to get her phone number and call my grandfather. He brought my mother home safely and had to be talked down from going to the school to “stomp that teacher,” though my grandmother confessed later that she wished she’d let him go. 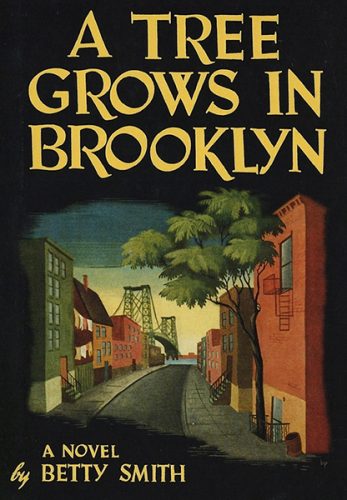 I loved in my mother telling that story what I loved in the book—the way a sentimental story doesn’t have to be a cheap one, the way gentleness sometimes has to be fought for. I knew my mother loved the story of her rescue because the tenderness with which she was cared for then was not always present, the violence not always directed outward. In a life in which she’d so often been small with no one to stick up for her, it mattered the times someone had.

I thought my mother would love the book, and she did. Until she was actually dying and it turned out to be impossible to undo, she would quote it to reassure me when I asked what she was going to do about a problem that seemed insurmountable: “It takes a lot of doing to die.”

Before I left for Iowa, my mother and I had a terrible fight. I can’t remember what the fight was ostensibly about; I’m certain it was on some level actually about my leaving, and in some way a variation of the only fight we ever had: she thought I did not believe in things, or people, or her, enough, and I thought she had so much faith in things it bordered on reckless; we could see these things in each other only as a form of judgment and not as a love in which we overcompensated for each other’s weaknesses. At some point in the shouting, someone walked out of the house and into the rain in her socks to end the argument. Sometimes I remember being the one who was so hurt she walked outside, and sometimes I remember waiting for my mother to come back, feeling annoyed and abandoned and worried. As much of my life as I spent angry at my mother for not acknowledging we were two different people, sometimes I also forget.

Where memory fails me, logic steps in. My mother never would have purposely dirtied a pair of socks. She would have relished the theatrics of putting on her sneakers before walking out the door, would have yelled something like, “Do you see how you are making me leave my own home?” The one who, once she was done, was out the door without a minute longer to think about it, who wouldn’t even pause to put her shoes on: of course that was me.

My college and grad school years had been among the rockiest of my mother’s life, a life that we all thought would eventually be back on the upswing, but as it turned out mostly put her through hell until she died of cancer just over a decade later. She wasn’t sick then, but she was in the barely insured precarity that let her get to stage 4 with a liter of fluid in her lungs before knowing something was wrong. I had grown up with a great deal of cultural class privilege, but often little money; like a lot of first-generation middle-class people’s, my mother’s finances were without a safety net. I did not understand until I went to college what “paycheck to paycheck” meant, because I did not know that people outside of the obscenely rich had extra money just sitting in bank accounts. Increasingly, my mother viewed my every separation as a deliberate provocation, proof I was ashamed of her. I was not, but I was wrestling with the reality that at the first time in my emotional life that it occurred to me it was not my job to keep my mother alive, the conditions of her actual life seemed to suggest that someone was going to have to.

“I can still drive you to Iowa, but I guess you don’t even want me there,” she said, but of course I did, and of course she drove.

I came back to A Tree Grows in Brooklyn the year I moved to Iowa, without any of the baggage I would bring to it later. I would eventually feel more romantic about graduate school, but I believed then I was in the state of Iowa to collect my check and write a book. I didn’t know yet that it was out of taste then for a book to be girly or sentimental or perceived as juvenile, let alone all three. I would learn to love some of the contemporary canon, but I’d been brought to grad school by books like Sassafrass, Cypress & Indigo and Brown Girl, Brownstones. I’d become okay with the concept of Iowa because ZZ Packer had gone there; I was clueless about what legacies I was supposed to value more. It would not be the first time I was saved by my own obliviousness.

There are things in the book that don’t hold up—its affection for diversity can’t save all of its language about race—but Smith writes beautifully and sharply about class, about how clearly you can see power from below and how little you can do about it, how often Francie is punished for being her own best advocate, things I recognized from having been a little black girl.

I needed that book—I needed its reminder that there is still loss in what feels like escape. I needed its reassurance that children should be taught to believe in things and also to learn to stop, that a loss of faith can be adulthood and not betrayal. I had forgotten for years the order of the ending of A Tree Grows in Brooklyn. I remembered there was a fight about Francie’s future and a reconciliation and a time her mother comforts her after a heartbreak. But I had forgotten that after the reconciliation comes the line “In their secret hearts, each knew that it wasn’t all right and would never be all right between them again,” and that the moment when Francie’s mother comforts her comes even later still. I had forgotten the lesson in the order of operations: how long things can keep going after an irreversible break, how much you can still need a mother after you’ve left to become yourself.

Danielle Evans is the author of the story collection Before You Suffocate Your Own Fool Self. She teaches in The Writing Seminars at John Hopkins University.