What does it take to leave everything in your life behind? To dream of a future unencumbered by the past because you have abandoned your past and all the people in it?

Catherine Lacey’s debut novel Nobody Is Ever Missing follows a young woman named Elyria as she hitchhikes through New Zealand after leaving her family in New York without warning. Her past, however, proves to be impossible to escape and much of the novel exists in the fever dream state of Elyria’s rememberings as she thinks back on the unraveling of her marriage and her sister’s suicide.

To say that Lacey’s novel is one of the most entrancing novels I have ever read would be an understatement. It took only a handful of pages to convince me that I would follow Catherine Lacey wherever she led me—there are some writers whose instincts are so clearly on point that one inherently trusts them to make the right choices. Lacey’s prose has an obsessive quality about it that builds with an unstoppable momentum and results in a lyrical and haunting meditation on loss and displacement. Nobody Is Ever Missing is the ellipses on the question of “What if…?” and the work of a talented new voice.

I met Catherine in December at a reading she did for Green Apple Books on the Park in San Francisco and was impressed by her reflective insights on writing and literature as well as her thoughts on the difficulties and possibilities of making a living as an artist.

Catherine Lacey: I made the often-unadvised choice of starting an MFA straight out of undergraduate, during which I had written a short collection of essays for my thesis. I was pretty sure I needed more training to become a better critic and essayist, that it wasn’t the sort of thing I could do alone. I was writing fiction as well, but I was more private about it and I thought any improvement there would only come from solitude and I think that was somewhat true for me. At Columbia I took a fair amount of fiction seminars, which were hugely impactful, more than I even realized at the time because I was so focused on writing nonfiction. I spent about four years working on a book there that just didn’t hang together. Around the same time I realized that book didn’t work, I started writing the series of stories that became Nobody Is Ever Missing.

As far as approach, my fiction seems to come from an untamable, uncooperative place in the brain, while the process of writing nonfiction is more above board and straightforward. I will edit an essay with just about any editor I happen to be working with, but I only share unfinished fiction with a select few. 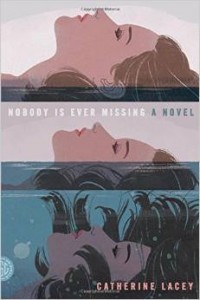 EB: That’s interesting you find writing fiction a more private act than nonfiction. What is it about writing fiction that makes it more difficult to share, at least initially?

CL: With nonfiction the goal is so much more specific. I usually have a specific idea I want to get across or a story to tell that has already happened. The idea is either clear or its not. The artistry that goes into turning a piece of writing into something more like a piece of art is still there, but the underlying goal of the piece is there regardless. In fiction I tend to not know what I’m writing about until I’m nearly done and sometimes I still can’t articulate it. I don’t want anyone in on it until I am sure I innately know what direction I’m trying to lead it.

EB: There seems to be an assumption many people jump to that first person novels (especially if they are about women and written by women) must actually be some sort of insidious, undercover form of nonfiction. Did this change the way you approached writing Nobody Is Ever Missing? Does this assumption that you are actually your character make it difficult to write a character who can, at times, be somewhat difficult and unlikeable?

CL: Thankfully this sort of self-awareness didn’t shape the way I was writing, at least not to my knowledge. There was one reporter who seemed intent to conflate me with Elyria and I wrote a rant-y essay about it for Buzzfeed Books, but other than that I think I’ve more or less escaped accusations of autobiography.

That said, I’m starting to discover that my method for building a first person voice is a mix of theater and surrogacy. A new voice generally starts sounding close to my own voice, but as it continues to develop all these foreign parts get mixed in until it feels like something outside of me. At that point I try to inhabit that character as if she or he is a character in a script that I’ve been cast to play. And isn’t it always more fun to play a jerk or freak instead of a basically well-behaved nice person?

EB: Always! Well-behaved people rarely make for particularly interesting stories which is why it surprises me when some people will criticize a book because the character isn’t someone they want to hang out with. I liked what Claire Messud said in an interview a couple years ago: “The relevant question isn’t ‘is this a potential friend for me?’ but ‘is this character alive?’”

CL: Yep. Today someone on Twitter asked me, “How do you live with yourself?” At first I thought he was just being mean, but it turns out he was a fan of the book, he was just generally curious if my brain worked the same way as Elyria’s brain. I wrote a book about a person who would never write a book and non-insane people still think she’s me. No one is safe.

EB: The sentences in Nobody Is Ever Missing have a very lyrical, almost rambling (in the best possible way) quality about them that pulls the reader into Elyria’s head. Did you find that you were writing in a style that felt familiar to you, or did the evolution of the character shape the structure of the story?

CL: She took about a year before her voice became clear to me, then it became a lot easier to write. I think the first time I felt like I had figured out who she was beyond just the basic facts of her life was in one of the chapters where she is speaking directly to her husband and going on rant about penguins and dogs and babies that is both logical and illogical. You know, maybe that’s it. Everyone has their own personal way of being simultaneously logical and illogical. Understanding your characters is a search for those points of illogical logic.

EB: Elyria spends a lot of time alone and except for in the flashback scenes the only interactions we witness her having with other people are interactions with strangers. As I was reading I couldn’t help but feel like I was waiting for one of these people to do something terrible to her and was rather (pleasantly) surprised when they did not. Is that an assumption you thought readers might have? Is there something inherently loaded in this idea of a woman alone?

CL: The fact that readers would fear for Elyria’s safety isn’t something that really crossed my mind while I was writing it. I have always loved traveling alone and I did actually hitchhike in New Zealand, which I always considered more efficient than risky, despite the fact that a lot of the women who picked me up told me I was being insane and dangerous. The men who I hitchhiked with were half as likely to warn me of this. I believe there is nothing inherently loaded about a woman traveling alone. The accepted lie that women shouldn’t travel alone is much more loaded to me. Human beings tend to live up to the narratives around them. If you grow up being told there’s a whole list of things you can’t do, you are likely to cave in and start adding to that list.

EB: Escape is clearly a big theme in this book and the fact that Elyria actually acts on her desire to run away leaves the reader feeling both in awe of her and also a little frightened for her. What is it about this idea of disappearing that resonated with you?

CL: One thing that disappearance or isolation or solitude can be about is trying to discover who you are without the context of other people. Artists and writers either have this sense of estrangement built-in or they have to find a way to get it. The paradox is that the product of your isolation—your art or stories—are a form of connection with other people on some level, or a way for people to connect with each other. So, the tension between isolation and connection is something that kept coming up while I was writing—how much can I do alone, how much do I need other people, how much do other people need me to be around and for what purpose? Elyria isn’t an artist, so her way of looking at this is different, but I suppose I was drawn to her story because of the way it parallels being a writer who also wants to be a connected, kind human.

EB: We do seem to have a cultural tendency to typecast artists as these solitary geniuses, but you’re right, the reality of creating art is finding that balance between independence and interdependence. You wrote Nobody Is Ever Missing while living and working at a collectively owned and operated bed and breakfast. Did this type of communal atmosphere change the way you look at or make art?

CL: It certainly taught me a lot of things about communicating with people and building friendships that can handle the stresses of running a business together and I learned a lot of it by failing, which really is also how you learn how to write. Overall it probably didn’t have as direct of an effect on me as the specific people did but I don’t know how I would measure or describe that effect. Massive and imperceptible at the same time.

Catherine Lacey is the author of Nobody Is Ever Missing, (Farrar, Straus & Giroux, 2014). It was released in the UK, New Zealand and Australia by Granta Books; a French translation is forthcoming from Actes Sud. Her short fiction and essays have been published widely. She was named a Granta New Voice in 2014 and awarded an Artist’s Fellowship from NYFA in 2012. She teaches in the Creative Writing Program at Columbia Univeristy. Her forthcoming novel is titled, The End of Uncertainty.

Emily Ballaine is a writer and a bookseller at Green Apple Books on the Park. She lives in San Francisco.

The New and Improved Romie Futch: An Interview with Julia Elliott and Rachel Kaplan

A Reverie of Small Details: An Interview with Kim Brooks