Everyone was frothing at the mouth for Reagan, and I slept comfortably in the arms of his rhetoric, beating my tin drum and hoping the Communists stuck their toes over the line. My hometown started getting lots of attention. We’d become the possible retirement destination for the leader of a white supremacist group from northern Idaho. And we were enduring a winter with more rainfall than Bergen, Norway. During the month of November, Norwegian reporters and talking heads from network television affiliates interviewed people we knew about the rain and neo-Nazis in parking lots all over town: Bi-Mart, K-Mart, the Cenex feed store, labor halls, Gussie’s Dine and Dance. Tall blond people in scarves. Woman with big hair and assistants. Clean-looking white vans. Mobile satellite dishes.

Inside our cupboards hung rows of grocery receipts taped up and highlighted. My parents invented a game. On Fridays we’d go over the new receipts—if we’d spent less money on food than the previous week, we got to have ice cream for dinner and stay up late and sleep in the living room. All my sister wanted for Christmas was a pair of acid-washed Guess jeans.  My father lost his job at Georgia Pacific and took over the shopping duties. At night, lying in bed, I could hear them drawing up their strategies for everything. The mortgage, what they could sell, how she might pick up more hours. I also learned that my father found a pair of used Guess jeans at the Goodwill in my sister’s size.

By Christmas he started working a few days a week at the cannery. His rubber boots gleamed and sparkled with fish scales. He stank. To make it look like the jeans were new, my aunt Cheryl, who managed Women’s and Juniors’ at J. C. Penney’s, put a fake tag through the waistband; my father used one of the vacuum sealers at the cannery to encase the jeans in plastic. When we went back to school after Christmas, my sister wore the jeans every day—they reeked of the cannery. Her teacher asked her to stop wearing the jeans but she refused. I had to fight everyone who called her “tuna” and got suspended. My mom soaked the jeans in vinegar, scrubbed them with peanut butter, washed them with bleach. At night I ground my teeth and arranged and rearranged the glow-in-the-dark cosmos on my ceiling. I prayed for the first missiles to hurtle through space. I knew whose side I was on. 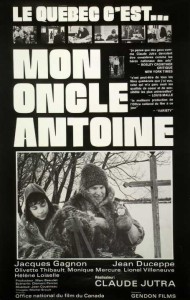 Now Christmastime is over, and that means the 6am slog up the hill in the snow with my brother to catch the yellow bus to school, with the pop radio station playing Pat Benatar’s “Hell is for Children” over the crummy speakers. In the dead of winter, mom places space heaters in our rooms and Capri Sun juice boxes with tropical imagery in our metal lunchboxes, mine with its SPACE 1999 theme. Meals at home have a theme – what mom calls “Mexican Night,” “Italian Night,” and “Chili Night” are variations on the same ground beef.

Along the road to the bus, up to the shins in wet sloshy January snow, where in the summer the lilacs die in rank bursts of sweet rot. In autumn, the woods provide cover for secret military missions against an occupying army of fascists having trouble subduing the last pockets of resistance.

But for now it’s not even light yet and we’re trudging in a sulk up that hill for a forty-five-minute ride debating Reaganomics with the bus driver. At school our boots sit in dripping little rows in the closet with all the other kids’ nicer, less decrepit, more totally waterproof boots. The boots of kids who get rides to school in cars with moms who deliver them to houses with furnaces instead of wood stoves and cupboards filled with food instead of mouse droppings and dead batteries.

Our boots leak, so mom lines our feet with plastic bags to keep our toes dry and snug. The best bags to use are bagel bags, because the plastic is thicker and they are elongated in shape, like socks. I brag to everyone about the clever way they keep out the snow, never recognizing that our teachers probably feel sorry for us. This is the school where a group of wild girls will chase me around on the playground in order to pin me down and kiss me on my birthday, the school where I will fail the fourth grade entry test for the advanced reading group, Cinnamon Peaks, the school where sex education classes will conclude with me believing that a woman’s ovaries are located in her breasts, the school where we bob for apples on Halloween and learn about haiku and the intelligence of pigs and where the principal later will be accused of embezzling from petty cash.