A passionate sailor, striving writer, and unwilling movie star, Sterling Hayden lived a picaresque life in which his nascent internal struggles were compounded by the American century in which he lived. The chief literary artifact of this extraordinary existence, Hayden’s mid-life autobiography Wanderer, published in 1963, distinguishes itself amongst its genre through its formal imitation of the tumultuous, singular life of its author.

Born in Montclair, New Jersey in 1916, Hayden spent his youth rootless, searching with his mother for stability after the premature death of his father. In adolescence, he discovered and quickly came to love sailing. 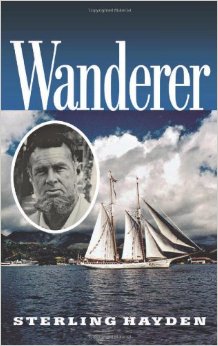 Against the warnings of his mother and, frequently, his fellow sailors, Hayden took to the ocean as a teenager, working on any boat that would have him. By his early twenties, he had traversed the Pacific several times, weighed anchor in Cuba, Tahiti and Florida, and risen to the rank of first mate. Hayden adopted the leathery captain of a trans-Pacific pleasure cruiser as his mentor, and spied in that man’s boat a template for the career he hoped to imitate.

An almost unbelievable confluence of chance interrupted Hayden’s plans. A “tall youth, with bulging forearms, and a faraway look in his eyes,” Hayden cut an impressive figure. Spying potential in Hayden’s looks, a friend recommended that he try to get into movies, as a way to make money in between his voyages at sea. Wary of both acting and the entertainment industry, Hayden nonetheless agreed to give it a shot and spent a miserable interval in New York failing to gain traction in the worlds of either theater or cinema. He was on the cusp of returning to the sea when an acquaintance wrangled him an audience with Edward Griffith of Paramount Studios, who not only liked Hayden, but selected him immediately for entry into Paramount’s star-making apparatus.

During the next decade, Hayden developed a prominent career as a film actor, even as his distrust for Hollywood ossified into outright contempt. “There’s nothing wrong with being an actor,” he later wrote, “if that’s what a man wants. But there’s everything wrong with achieving an exalted status simply because one photographs well and is able to handle dialogue put in one’s mouth by others.”

He averaged a salary of $150,000 a year and enjoyed sizable, and to his mind unearned, celebrity. Though he longed to cut and run, Hayden’s weaknesses—for money, for women, for booze—kept delaying his escape. By the early 1940s he had become a movie star, and he hated it.

World War II added another unlikely chapter to Hayden’s saga. Under a pseudonym, he ditched Hollywood to serve in the Office of Strategic Services — the precursor organization to the CIA. A desk jockey in neither spirit nor practice, Hayden spent the war working as an undercover agent, executing missions that included parachuting into fascist-held Eastern Europe and running the German naval blockade to deliver supplies to Yugoslav partisans. He came away from the experience with a hard-won admiration for Yugoslav revolutionary Josip Tito, an exacerbated drinking problem, and the conviction that the Army, like the Hollywood system, the government, and the workaday world, was bullshit.

After the war, Hayden returned to L.A. and continued to act, but his misery only increased. He had already started to scheme about his escape when fate once more pushed his life off course.

Like many intelligent youths of iconoclastic tendency, Hayden for a period considered himself a Marxist. A clique of Hollywood leftists introduced him to the philosophy in the 1940s, and though the political convictions failed to stick, they left a trail of evidence thick enough to put Hayden at risk when Senator Joseph McCarthy began treating Hollywood to anti-Communist purges in the early 1950s.

Fearing for his freedom, Hayden opted to testify before the House Un-American Activities Committee. He named names. The Feds let him walk, to a chorus of congratulations that he dismissed as “jingoistic drivel.”

He starred in more lousy movies; he married and divorced; he fought with his wife for custody of their children. He drank. By 1959 he had had enough. With a schooner purchased on loan from Paramount, and a tenuous legal claim to his four, elementary-school aged progeny, he set sail for Tahiti. His crew of soft-handed dreamers he had assembled from a want ad. On deck, he drank freely. Though he had planned to finance the voyage by making a documentary about his exploits, once at sea he ignored the $5,000 worth of camera equipment sitting in his hold and began to write Wanderer.

I first learned about Wanderer while listening to an interview with the filmmaker Paul Thomas Anderson. He mentioned that he had kept Hayden in mind as the model for a character in his film Inherent Vice, an adaptation of the Thomas Pynchon novel of the same name and an exploration, in part, of anti-authoritarian paranoia. Even in Anderson’s ten-second summary, Hayden’s life appeared to beggar belief. When I heard that Hayden had chronicled his own remarkable exploits, I sought out the book, which has drifted into and out of print since its original publication, and discovered a work as forthright, startling and contradictory as the man himself.

A florid, careening book, Wanderer begins with a burst of enthusiasm evidently bred from Hayden’s joy at having slipped free of Hollywood. “Poor wanderer,” he writes, “trapped in the greenbacked cradle of Outer Hollywood; laced in the straight jacket of the big time – big houses big salaries big fuss when you walk down the street big fuss as you check into hotels – big big big.”

Hayden’s blunt prose resembles that of Norman Mailer and John Fante, both of whom shared Hayden’s attraction to brusque, masculine romanticism. His talent shines with the greatest intensity in his scenes of dialogue, and in his precise, literary sketches. He describes a director as looking “important and confused, like a small town mayor.” Of the San Francisco Bay at dawn he writes, “a crust of yellow air hung over the endless square miles of housing tracts, resembling an acute case of acne on the ruddy cheeks of the valley.”

That these scenes and portraits fail to cohere into a larger narrative speaks to the manner of the book’s creation; Wanderer reads like it was assembled by a drunk because it was. Writing with the bottle as an almost constant companion, Hayden let his narrative slosh back and forth between his then-present-day exploits in Tahiti, his beloved youth at sea, and his dreaded years in the miasma of Hollywood.

The book begins in California, detours to Boston, washes up in New York, spends a louche idle in Los Angeles, then makes time for layovers in Tahiti, Yugoslavia and New Jersey. Hayden sails, seduces, acts, ponders, testifies and submits, for a cringe-worthy passage, to psychoanalysis. Like his trip to Tahiti, the book is “not so much a voyage as an act of defiance.”

Despite its formlessness, Wanderer nonetheless assumes narrative momentum as Hayden draws near the event that constitutes the book’s climax, and the defining moment of his own life—his testimony before HUAAC.

He avoids even mentioning that he turned stoolie for McCarthy until the final third of Wanderer. However, once the subject creeps into his narrative, it becomes clear that the four hundred pages leading up to it have been prelude.

The passages describing his testimony are grueling. Hayden tries to cheat his fate with lawyers, psychoanalysts (“You know, Mr. Hayden, there are times when alcohol, properly handled, can bring relief”), and stalling, but he ultimately caves. His willingness to sell out his fellows recasts the Thoreau-ian bombast with which he begins Wanderer. “In almost all countries,” he writes, “a man who collaborates with those who would punish freedoms arouses the hatred of his countrymen. And yet today, in the United States of America, the way to loyalty is this – down the muddy informer’s trail.”

Money and legal wrangling eventually recalled Hayden from his adventure in the South Pacific. Upon returning, he continued to act, but split his time between the movies and his boat. He made meandering voyages through the rivers of France and out into the Mediterranean. He drank and smoked pot and wrote, producing a 700-page nautical adventure novel at the age of fifty-four. When he ran out of money, he would do a couple of movies to replenish his bank account, then return to sea. It was during this era that he landed his most enduring roles, turning in brief, commanding performances as a corrupt police captain in The Godfather, and a deranged general in Dr. Strangelove. Despite remaining in steady demand well into his sixties, Hayden never quite acclimated himself to the idea of being an actor, and instead spent more and more time at sea, a mer-creature of freedom and constraint.

Wanderer expresses Hayden’s dilemma perhaps better than even its author realized. The vigor apparent in his performances animates the book as well. But in literature as in life, Hayden failed to direct that wellspring towards a single end, in this case adorning a listless narrative with periodic passages of brilliance.

Toward the end of his life, as the world and his role within it continued to disappoint, Hayden clung with ever-greater ferocity to his boat. “If I knew myself as well as I know this vessel,” he wrote, “I’d be of some use to this world.”

Shane Danaher is a writer and journalist. He lives in Brooklyn.

Just Above the Buttocks