When I was a child, I was given a book that was not really a book at all.

It tricked me at first. I believed anything with pages to turn, words, and pictures was a book, but as I turned this object’s pages, read its words, looked at its pictures, I felt myself in the presence of something fantastically different than the other books scattered throughout the house. In a book, I began at page one, moved to page two, and by this way eventually found myself at the end. No matter what occurred on the pages, if I kept reading I would eventually reach the final sentence, whether I wanted to or not. The thing disguised as a book, on the other hand, did not take me from page one to page two. “This is a building in the shape of a book,” it said. It elaborated, told me it was a maze and that by traveling through the rooms I might find my way to the center. Clues lay hidden in each room to suggest where to go next. Not all the clues were going to help me. Some would try and get me terribly lost. Unnerving as this was, it was also irresistible, and I spent many hours on my stomach, the maze before me on the carpet, as I wandered through the rooms, trying (unsuccessfully) to untangle the clues, and continually opening a door leading to a room that was pitch black except for the dozens of eyes staring at me. A room where I died over and over and over and over and over again. 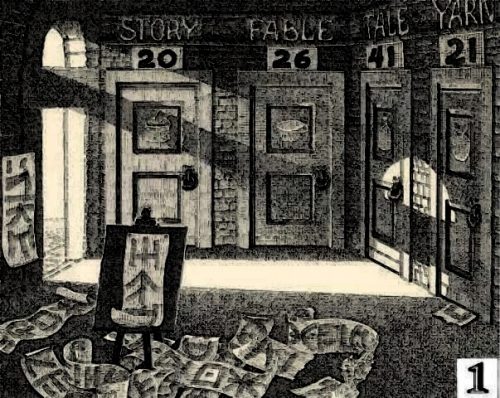 The title of this work that consumed large chunks of my childhood is MAZE (with the flavorless subtitle, Solve the World’s Most Challenging Puzzle). It is one of a handful of works written and illustrated by Christopher Manson, and though his others are similar in their use of fairy tale and mythic elements, MAZE alone possess a hypnotic power, transcending its binding and reaching toward something else.

Each double-page spread depicts one of MAZE’s 45 rooms. The left page contains between seven and thirteen lines of text while the right page features a lush pen-and-ink drawing of the room itself, eerie as a de Chirico with its impression that either someone has just left or will shortly arrive. Manson loosed his prodigious imagination in the creation of these spaces, crafting each room with a general theme and them cramming most of them with a mix of baroque furniture, shrubs manicured into geometric shapes, exotic birds, Kafkaesque machines, musical instruments, trap doors, lamps, crumbling porticos, strange glyphs and signs carved into the walls. Or, instead, a room may be empty except for a fire raging inside a hearth whose cavernous depths are crowned by mantle carved to look like a gaping mouth. Inside each room are doors, and each door will take you to another room. You are challenged to find a way to room 45 and then back to room 1 using the fewest steps possible. Furthermore, a riddle is hidden in room 45, and the riddle’s solution is tucked away in the other 44 rooms.

What sounds simple at first becomes morbidly, maddeningly difficult. Rather than not having enough information, the challenge becomes one of over-saturation as each elaborately arranged room and block of narrative text provides numerous pointing fingers (sometimes literally) without there being indications as to which are more valuable than others. Will the solution to a particular room become clear only after you turn the room upside down? Is a face hidden in the carving over the door?  Should you rearrange the letters in words spoken by the characters? As you move from room to room you find yourself going in circles, collapsing back into already experienced scenes, and you can’t help but wonder, as though this were really a book by Robbe-Grillet, whether or not something obscure but crucial has changed. 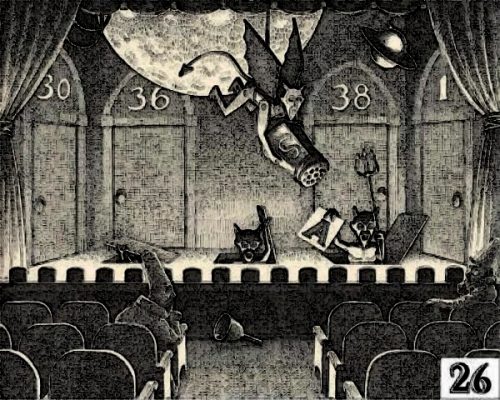 Of course, things have changed. As you reenter a previous room, the returning images—an umbrella leaning against a doorway or the shadow cast by a bowling pin—become new in light of something else recently seen. Each room builds on your lexicon of figures, signs, and your MAZE language. Your perception deepens, and so, to adapt the Zen koan, you never enter the same room twice.

In the attempt to unravel MAZE’s devilishly hidden secrets, a possible solution something greater presents itself. If we can take something away from this work—other than an appreciation for cross-hatch shading technique and unsettling dialogue—it is the idea of repetition as a path towards sublimity. 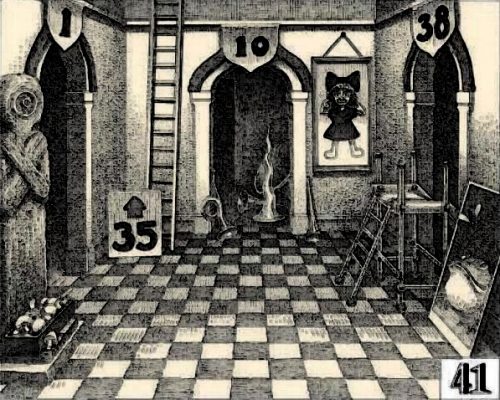 MAZE’s major triumph lies in urging us to recognize the inexorability of continual repetition, something that becomes even more crucial in our increasingly labyrinthine world. We live with the expanding illusion of different and unique rooms, each seeming to offer momentary justification for our existence. We bound through chambers of experiences and believe ourselves to be continually ascending towards…what? Enlightenment? God? A consciousness-shattering orgasm?  But the elaborate approaches to fundamental anxieties are not new rooms so much as rearranged furniture. The rooms are the same, a fact we don’t realize until we suddenly recognize our surroundings and think, “how is it possible I am still here dealing with this?” We hold the proof of our varied and wild experience, but proof does not equate with meaning, and the awareness that our hands are gripping shrinking fistfuls of sand begins to feel like the darkest moment of our lives. 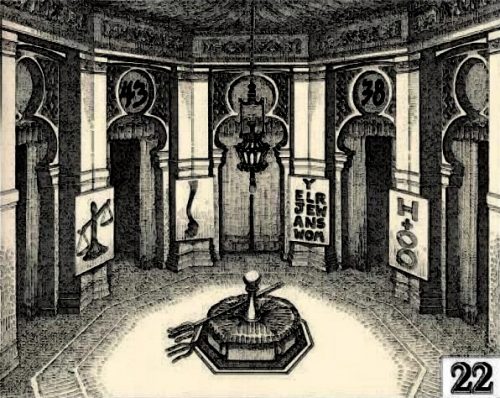 MAZE recognizes our learned desire to progress and then creates an environment where such progress is almost impossible. “You haven’t spend nearly enough time here,” MAZE seems to say, “keep looking.” At first this can seem like a punishment. We want to move upwards and onwards! How dare someone deprive us of our right to ascend! But, and this is a beauty of the printed page, MAZE does not respond to our rage. It sits patiently on the shelf until our curiosity bests our petulance and we take it down again. Then it continues from where we left off: at room number 1.

Of course, the 31 years since the book’s publication gave people a chance to solve most—I hesitate to say all—of MAZE’s puzzles. If you want, you can simply Google the answer. You will find websites and podcasts dedicated to MAZE exegesis and emulation, where fans of the work debate the meaning of symbols drawn on a scroll or the importance of an apple partially hidden in shadows. They will also tell you the identity of the narrator and how to reach room 45. However, I will caution you: knowing the solution to the riddle or the shortest path through MAZE will not unlock the secret of the work.  That can only happen by accepting the puzzle as it presents itself, in all its opacity, in all of its chaos.  Anything less is—to use a key MAZE theme—a red herring. You may think you’ve reached the center, but in reality you will have only skirted around the outer rim, never allowing yourself to be swallowed whole. 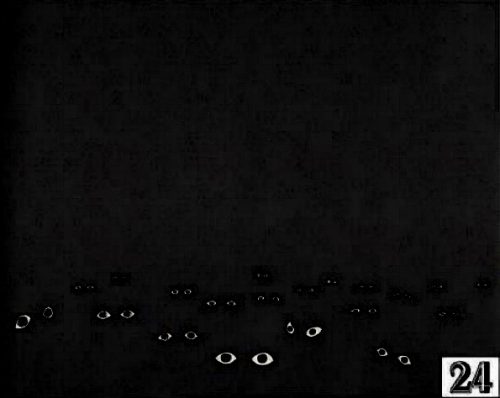 I have never reached the 45th room, which means I am always starting and continuing through MAZE. I’ve stopped expecting I’ll find the shortest route, and I can’t even think about solving the riddle. Now I enter primarily to breathe the strangeness of the spaces and to show friends who haven’t ever heard of MAZE: Solve the World’s Most Challenging Puzzle. Because I always follow the rules and enter with disbelief suspended there are several rooms I haven’t ever seen. I’m sure I’m missing something obvious, and maybe this should bother me, but I am content to wander through the rooms whose surroundings I recognize and provide continual delight. In room 7 an abandoned toy duck looks up at me.  In room 20 a tortoise crawls across the carpet. In room 26 several devils perform a play. In room 42 a small bear holds a sign reading “saints that way sinners this way.” And in room 45? That’s something you’ll have to find out on your own.

Samuel Annis is a writer and piano technician in Madison, Wisconsin.