As a child, I had an affinity for men with mustaches. “Oh, half the time I’d look up and you’d be off sitting on some strange man’s lap,” my mother blithely tells me. Apparently, my new acquaintances tended to have facial hair reminiscent of my own father’s brief and ill-advised flirtation with a Fu Manchu.

All in all, I came away with the impression that the seventies were a hairier, more trusting time. The magic of this era returned to me as I read Burt Reynolds’s inexplicable 1972 tome, Hot Line: The Letters I Get . . . and Write!, a book that rekindled my dimmest childhood recollections of all the uncomfortable things adults seemed likely to do and say. 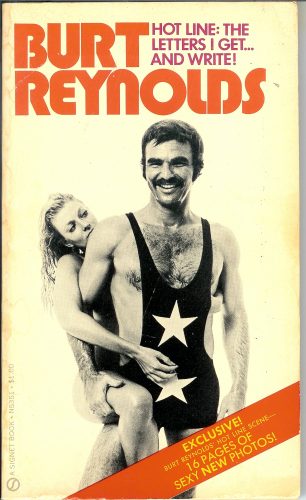 It’s fair to assume that Signet’s literary goals in publishing Hot Line were modest. The three-paragraph intro—in three different fonts—and the back cover copy (“The great new fun book by the guy all America’s talking about!”) suggest the efforts of a passing intern. For the body of the book, the publishers gathered up a few of Burt’s numerous fan letters (many received in the wake of the infamous 1972 Cosmopolitan centerfold for which he reclined nude on a bearskin rug) and a brief response by him to each. Then they added some photos and called it a day.

Hot Line Burt’s concerns include hot pants, ladies’ measurements, randy grannies, and his own luxurious pelt. His literary style is heavy on puns, brief suggestive messages that sound jaunty but upon closer inspection are mostly nonsensical, and many an unnecessary quotation mark.

The letters form an accidental social document that cuts across social class, gender, sexual preference, and intention; there are letters from seventy-year-olds, children, men, and women, single and married, urban and rural. Husbands, especially when they try to compete with Burt for their wives’ attention, seem a hapless, beer-swilling, yet accepting lot. Most of the writers are women, some dangling the promise of a swinging single girl (“I dig fast cars, motorcycles, groovy guys, groovy times and sex”), while others see no reason to prettify their particulars. “I can’t write too good,” explains Hot Mountain Gal, “as three years ago I cut the first joint of my index finger off grinding meat . . . I smoke a pipe when I’m hunting. Other times I smoke cigars.” 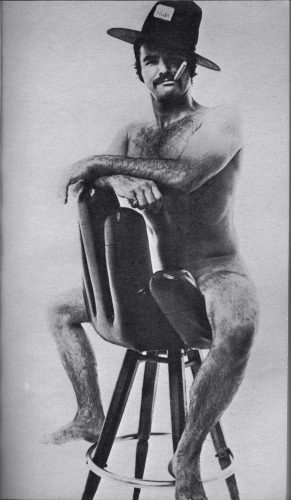 It soon becomes evident that even for the seventies, Burt’s hairiness was notable. Correspondents frequently discuss his body hair and mustache, speculating on the location and potential applications of both. “Say, Burt,” writes one Connie L. of Lincoln, Nebraska, “that mustache is a real womb broom.”

Sometimes I think these fans actually intended to leave a time capsule of the decade. They drop seductive promises for “a motel with waterbeds,” plenty of grass, no VD, and a good lay. The tone ranges from chummy (“Isn’t that a big howl?”) to brash (“Dear Ballsy”) to outright desperation (“Honest to God, Burt, the thing in the world I’d most like to do is fuck your brains out”). But most striking is the cheekiness of the overall tone, indicating either pre-AIDS freedom or just the freedom of writing to someone you do not know. Sex as wished for, joked about, and offered in these pages seems human, forgivingly imperfect, even fun-loving. Compare it to chaste Twilight-style abstinence melodrama and tell me that “womb broom” doesn’t sound a little better.

Still, some letter writers were gravely offended by that Cosmo centerfold. One states primly, “I found you very repulsive with that hairy body.” And a few letters are simply transactional, whether tendering horses for sale or a role in a presumed-to-be-inevitable film adaptation of the letter writer’s book, titled The Cocksman and His Geronimo. One mother literally offers up her virgin daughter.

I should say, however, that it’s not all pleas for sex: there are missives from young boys in need of father figures and romantic guidance, semiliterate teenage babysitters, and several people who’ve flirted with suicide and seem mostly to need some contact or to prevent Burt from feeling the same despair. And so Burt becomes the furry, grinning screen on which to project a thousand needs and fantasies.

As enjoyable as it is to dig for subtext in the letters, the photos in Hot Line’s sixteen-page spread are truly riveting. Burt can often be found in wrestling singlet or head-to-toe denim, gazing skyward and guffawing at his dizzying good fortune. He has his soulful moments, too. He likes to peer out a window, bare-chested and holding a highball. I suspect he may have been mentally preparing himself for the final photos, which display him–nude but for a ranger’s hat and cigarillo clamped between his teeth–astride a hand-shaped chair. (I looked in vain for the suggestion of undies before accepting that this situation is probably just as unsanitary as it appears.) The spread concludes with Burt, exuberant before a white screen, pantsless and catching a football. 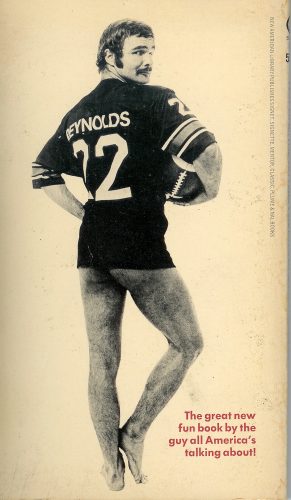 Hot Line’s photos depict a version of male beauty almost unrecognizable today, when a glance through People magazine’s sexiest men, undertaken for purely professional reasons, reveals a far more manicured vision of attractiveness. Modern teen idols are now depilated to an unthreatening smoothness that calls to mind laminated paper or a waxed apple. Men in their late twenties or above are occasionally permitted a scattered heart-shaped chest fuzz or two-day chin stubble, but even the modern sex symbol’s rumpled look is polite and controlled. Jon Hamm’s occasional dishevelment indicates he rented a cabin and stocked up on craft brews, whereas Burt’s fur suggests he unwound with a little light logging before consuming the uncooked head of a lynx.

The photos, staged and ridiculous as they are, have that same fleshy, silly enthusiasm that seems as much a relic as a gold medallion: buttocks are cupped; women hang on to Burt’s limbs like gibbons, gazing ferally up at him. Burt’s hand sometimes grips a woman’s flank firmly enough to indent the skin–nowadays, I bet that hand would hover, so as not to suggest any unsightly softness in an actual human body. Burt’s seamed and too-tan face, his many forms of tobacco, his sweaty glasses of booze . . . it’s all a bit much nowadays. Looking at these images, I feel I know exactly how everyone smells.

But it must be said that this overbearing, long-outdated version of manliness is also strangely enthralling simply because it may once have been sincere. While I was making the acquaintance of a plethora of mustachioed strangers, all of this was going on. There was a whole subtext I couldn’t have guessed at the age of four: men like Burt were part of the reason all of these men were cultivating sideburns and goatees. As ludicrous, baffling, and deeply embarrassing as Hot Line is, it also has a disconcerting ring of authenticity beneath all the staging, like discovering a dream that you felt silly about having was not a dream at all.

Michelle Wildgen is executive editor at Tin House, as well as the editor of the anthology Food & Booze and the author of three novels, You’re Not You, But Not For Long, and Bread and Butter.