Lest you go into post-election political reading withdrawal, Tom Grimes talks dissent, Nixon, and literary heroes in this Lost & Found on Norman Mailer’s Miami and the Siege of Chicago. 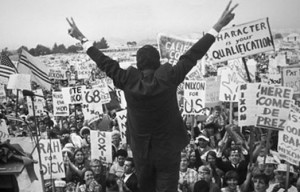 During the 1968 Democratic and Republican conventions, I was thirteen and far from being a political junkie, yet it was impossible for me to incubate myself from the fever dream of that year.  On April 4th, Martin Luther King was assassinated on the terrace of a Memphis motel; on June 5th, Bobby Kennedy was assassinated in the kitchen of a Los Angeles hotel.  And even though President Lyndon B. Johnson knew the war in Vietnam was lost, he ordered the U.S. army to send twenty-four thousand troops back for involuntary second duties.  Meanwhile, students burned draft cards, and, among other tragedies, Richard Nixon was elected President of the United States.  On a smaller, domestic scale, my father renounced his allegiance to the Democratic party and actually voted for Nixon, a man who, as Norman Mailer put it in Miami and the Siege of Chicago, “half the electorate had regarded for years as…a disease.”

The 1968 election was so close that the result wasn’t called until the following day at noon.  My friends and I were standing on line in our New York Catholic high school’s cafeteria when it was announced that Nixon had beaten Hubert Humphrey.  The boy next to me slapped one palm against his forehead in astonishment.  The cafeteria staff briefly stopped ladling out whatever gelatinous muck we were forced to eat that day.  Some of us cursed.  But soon our disbelief yielded to a sense of bereavement.  You see, for years, many of us, including myself, had lived on the fringe of the age’s radicalism.  Each Sunday I’d kneel at an altar rail and extend my tongue as a priest laid another papery white communion wafer on it, when in fact I wanted to be in Manhattan, hurling stones at Columbia University’s administration building.  But now that Richard Nixon had been elected, the death of that era of dissent had begun, and I felt cheated.  And yet, perhaps as a form of compensation for my disappointment, an inarticulate reverberation inside me suggested a new future for me.  I wanted to be a writer.

In 1974, I turned twenty and began searching for my voice as a novelist.  Living in New York, it was hard to escape Mailer’s presence.  He was everywhere – not simply on the page, but running for mayor, starting up the Village Voice, throwing martinis in Gore Vidal’s face, and, several years earlier, marching on the Pentagon with Noam Chomsky and Robert Lowell.  And since I naively believed that literature could shape political thought, Mailer became my existential hero.  Both are dated terms, I know.  Nonetheless, while working nights in a funeral parlor to put myself through college, I read his entire body of work in a month, staying up through the night, obsessed by the weight and density of his prose.  Coming half a decade late to the publication of Miami and the Siege of Chicago didn’t diminish the work’s power.  At least, not to me.  My literary imagination always seemed to be in pursuit of an apocalyptic vision.  Nothing less absolute or final would do.  I wanted to write lines like, “the Republic hovered on the edge of revolution, nihilism, and lines of police on the horizon, visions of future Vietnams in our own cities upon us.”  Mailer had created a form of literature that was part narrative and part prophecy.  Four decades before George W. Bush brought the ugliness of the Republican party’s spirit, tactics, and beliefs to full fruition, Mailer wrote that “only by wielding power could [Republicans] discover which concepts in conservative philosophy were viable, and what parts were mad.  One could predict: their budgeting would prove insane, their righteousness would prove insane…their livid passion for military superiority would smash its nose on the impossibility of having such superiority without mere government spending; their love of nature would have to take up arms against the despoiling foe, themselves, their own greed, their own big business.”

While many writers my age gravitated towards the newly ascendant and minimalist prose of Raymond Carver, I was drawn to Mailer’s ability to write riveting backyards and living rooms.  I didn’t want my novels set in backyards and living rooms.  Instead, I wanted to describe riots like the one at the Democratic National Convention, where “The police attacked [protestors] with tear gas, with Mace, and with clubs, they attacked like a chain saw cutting into wood…they attacked like a scythe through grass, lines of twenty and thirty policemen striking out in an arc, demonstrators feeling.  Seen from overhead, from the nineteenth floor, it was like a wind blowing dust, or the edge of waves riding foam on the shore.”

In time I would come to admire Raymond Carver, whose literary presence in the eighties was much like Mailer’s in the sixties – inescapable.  Yet I never tried to imitate Carver, whose unadorned prose was, according to literary critics, a reaction to our defeat in Vietnam.  As storytellers many of my contemporaries had moved from macro to micro, from prophecy to ambiguity, from revolution to revelation, from apocalypse to epiphany.  But I didn’t have a choice.  Mailer’s combination of concrete imagery and abstract speculation, his attempt to capture America on a grand scale – impossible and foolish, I know – and his sometimes overreaching and overwrought, yet occasionally disarmingly exquisite, insights and sincerity spoke to the writer I was trying to become.

Although I’m now far past twenty years old and have developed into the writer I imagine I was destined to be, my connection to Mailer deepened when I reread a particularly elegiac passage toward the end of the book.  Outside the convention hall, the riots had subsided.  Inside, Democrats would soon select their candidate for the presidency.  But first the party leaders “showed a movie…entitled ‘Robert Kennedy Remembered,’ and while it went on, through the hall, over the floor, and out across the country on television, a kind of unity came over everyone who was watching, at least for a little while.”  A few pages later Mailer concluded: Even dead, and on film, he was better and more moving than anything which had happened in their convention, and people were crying.  An ovation began.  Delegates came to their feet, and applauded an empty screen – it was as if the center of American life was now passing the age where it could still look forward: now people looked back into memory, into the past of the nation.

Tom Grimes is the author of five novels, a play, and a memoir. He edited Workshop: Seven Decades of the Iowa Writer’s Workshop, the creative writing program from which he graduated. He now directs the MFA Program in Creative Writing at Texas State University.