I wasn’t officially banned from the Winchester Public Library in the spring of 1976, but for a few weeks, I stayed away. Mrs. Barger, who worked the checkout desk, had discovered me on the back stairs after hours with one hand dangling a Newport Light and the other inside Billy Doyle’s jeans. She knew and respected my three older sisters, and though I suspected she wouldn’t rat me out, I couldn’t face the judgment that was sure to be coiled upon the old lady’s face if she saw me. So I sent my mother to get Travels with Charley for my ninth-grade Steinbeck project. By accident or by ruse–I’ll never know– Mrs. Barger sent her home with Graham Greene’s Travels with My Aunt. 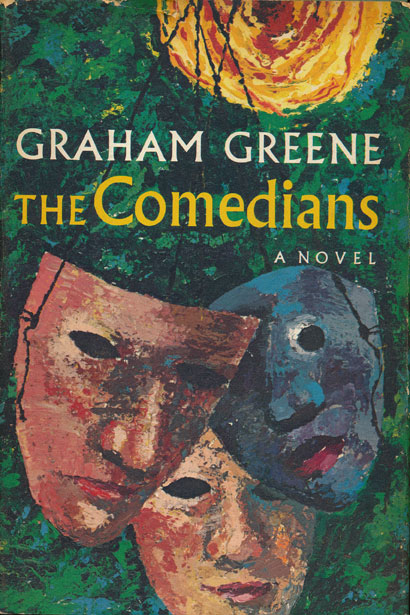 The book’s breezy conceit–eccentric elderly woman plucks her virgin nephew from his life tending dahlias and off they go to exotic ports of call–was the perfect foray into Greeneland and I was beguiled by the author’s literary charms. By the time I sat down with The Comedians, five books later, I still loved the tableaux of colonials clinking pink gins while rebels plotted in the shadows, but what got me into the tent isn’t what kept me there. I allied myself with Greene’s autobiographical heroes–men at once bound to, haunted by, and estranged from the Catholic Church, whose teachings run through their veins. At fifteen, I wasn’t really much of a sinner, but like Billy Doyle and pretty much everyone else I knew in suburban Boston, I was a Bad Catholic. Saddled with the twin encumbrances of lust and guilt, yet fully knowing what was right and holy, I took a sharp left away from catechism and what the nuns had tried to impart. Like lepidopterists or Francophiles, conflicted Catholics have a way of finding each other, as if to share the burden of juggling transgression and confession while trying to live a life. It is the constant tug of these extremes that only a person doused from birth in sacramental incense and holy water can fully comprehend, and one best endured in similar company.

The Comedians isn’t Greene’s most Catholic novel–that is probably The Heart of the Matter. But narrator Mr. Brown’s Jesuit upbringing is always at the forefront of his brain, whether in his frequent remembrances of his first (and only) fuck with the married teacher twice his age, who picks him up at the betting tables in Monaco where he was a seminary student, or in his guilt over his own guiltlessness in the arms of his present-day lover. “‘Man has but one virginity to lose,’ and I lost mine that winter afternoon in Monte Carlo,” Brown, the owner of the Hotel Trianon, ruminates in another casino, this time in Port-au-Prince, Haiti, on the night he meets Martha Pineda, the young wife of a fat South American ambassador. Even when he collects his winnings, Brown can’t dodge the shadow of the Catholic priests who raised him, as he discusses whether ambassadors–then husbands–are necessary evils.

“‘You believe that evil is necessary?’” he says to the cashier. “‘Then you’re a Manichean like myself.’ Our theological discussion could go no further, for he had not been educated at the College of the Visitation, and in any case the girl’s voice interrupted us.” The “girl” being the married woman with whom he’s about to sleep.

Brown strays and adheres simultaneously; he conveys that being a Catholic means that although you will never shake your history or the rituals that constitute its core and backbone, you’re also doomed to pursue sin, no matter what the cost. But he isn’t talking murder here, just sex. As a teenager, what wasn’t I to admire in this? I could think of no bigger turn-on than a person for whom seduction always prevails. The Greene hero knows he is damned, but he also knows that sensual pleasure is what grounds us in this short life, and anyway, there is absolution (or at least personal accountability) in the confessional. Greene was the most masculine of writers–all that whiskey, all that sweat-drenched lovemaking with either younger women or married ones or both–but I am convinced he really wrote for us ladies. Greene’s characters are troubled by their own detachment from women but they still respect them. The author gives them brains, and never condescends to the prostitutes in the brothels the heroes frequent in back alleys from Saigon to northern Argentina. In the Haiti of The Comedians, as usual, such women are smarter, braver, and more politically switched on than the johns. Greene wrote for men who like women, but also for women who like men–especially unencumbered loners who take big risks, are always in the mood, and, sexier still, are tortured Catholics.

In The Comedians, as in other books, Greene is not one for spouting papal encyclicals but rather for making Catholicism the undercurrent of all else, the fulcrum upon which everything tilts. It’s hard not to see the irony–and the Church’s omnipresent mantle–when the lovers’ moonlight assignations take place under the statue of Christopher Columbus in Port-au-Prince. (Back in Boston, we panted in the backseat of our parents’ station wagons behind St. Eulalia Church). The explorer who brought Catholicism (and its traveling companions, the enslavement and murder of the natives) to Haiti lords above the adulterers while the country descends into madness, thus mingling and bringing to light the many hypocrisies of the Church. The theme gets another layer as the new president, Haitian nationalist and Catholic Papa Doc Duvalier, leads the country into terror, and infuriates Rome not for his practice of torture and executions but for expelling all foreign-born priests. Brown discusses his religion at every turn – with Dr. Magiot, the dignified Marxist rebel leader, and later, with Captain Concasseur, the terrifying Tonton Macoute, while the latter holds the hotelier at gunpoint, making him pee his trousers. Evil has taken over and even the so-called faithless recognize hell when they see it. 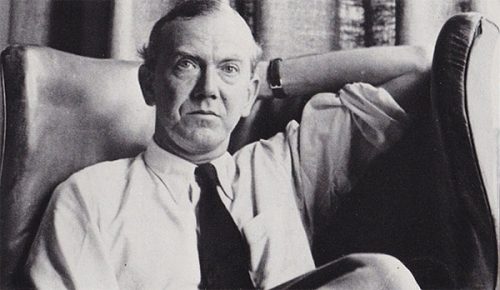 This is notable during Brown’s first and only voodoo ceremony, which he attends in solidarity with his hotel’s trusted bartender, Joseph. Scared, and maimed from an encounter with Papa Doc Duvalier’s security force, Joseph turns to the pagan gods when all else–prayer and the government, for starters–has failed. Brown is skeptical. “‘You are a Catholic,’” he says to Dr. Magiot. “‘You believe in reason.’” “‘The Voodooists are Catholic too, and we don’t live in a world of reason,’” Magiot responds.

In Haiti, you have to be Catholic to take part in a ceremony, whose Latin refrains–Libera nos a malo, agnus dei–are lifted from liturgy and provide Brown with a familiar reference point. But every religion and every deity, Brown seems to say, end up disappointing us: “I told myself I hadn’t left the Jesuits to be the victim of an African god,” he muses.

And yet, for Brown, his religion, both its presence and its absence, dominates his every breath. The constant interplay of sin and penance is the ingrained curse of the born Catholic, and luckily there is such a thing as reason, even if it comes only in flashes. One night, with the Trianon nearly abandoned in the political terror engulfing Haiti, Brown lies with Martha by the pool, where a government minister has recently slit his own throat to prevent Duvalier’s henchmen from doing it for him. After making love to her (Greene, not accidentally, endows Brown with both prodigious sexual appetites and occasional impotence), he denies his faith to Martha (“‘Do you think I still believe?’”) but later, obliquely, acknowledges the long shadow cast by the priests in Monaco. Mrs. Smith, one of two remaining Trianon guests, has seen and taken note of Brown’s rendezvous with Martha. “‘Was it my guilt which had deciphered disapproval on her face the other night?’” the self-professed remorseless one wonders. Sex with his mistress is a necessary pleasure, even if he can’t dodge the harshest judge: himself.

For a Catholic, the Church always forces its way in, tries to be noticed, begs to be ignored. Brown–with all his faults and in spite of himself–is a more spiritual man than he wants us to believe, no matter how many prostitutes or married women he fucks or how forcefully he tries and is unable to deny his faith. Although Brown neither chose nor escapes the cross he was born bearing, the subsequent abandonment of his faith is an intellectual exercise at best. His Catholicism is too deeply embedded as both scar and moral fiber. Even if he renounces it, he is compelled to maintain it, which allows him to be committed not to one thing, but to everything. It renders him human.

“We [the faithless] have chosen nothing, except to go on living,” he says. “I daresay it eased the never quiet conscience which had been injected into me without my consent, when I was too young to know, by the Fathers of the Visitation.”

In other words, Greene seems to say, you don’t need religion to be a Good Catholic. For me, as a teenager with many thousands of sins yet to commit, this was very good news indeed.

Marcia DeSanctis is a regular contributor to Vogue and Town & Country, and has also written for Marie Claire, The New York Times, Creative Nonfiction, O the Oprah Magazine, Architectural Digest, The Sunday Telegraph, BBC Travel, The Coachella Review, and many other publications. She is the recipient of five Lowell Thomas travel journalism awards for her essays from Rwanda, Haiti, Morocco, France and Russia and is the author of 100 PLACES IN FRANCE EVERY WOMAN SOULD GO (Travelers’ Tales/Solas House, 2014).