Everywhere in the town of Mount Magnet, population 500, in outback Western Australia, was the edge of town. The tin prefab house I lived in, the building I worked in, the liquor store slash supermarket—every where, every spot, was just a few minutes’ walk from the town into the desert.

This desert was the end of every line of sight –flat, arid, vast; an almost lurid orange-colored earth broken up by low rough scrub and rock. Aboriginal people had lived in that wilderness for 40,000 years, until white settlers arrived, in 1788, bringing war and massacre, stealing aboriginal children for servants and laborers.

The Australian Aborigines were left displaced, traumatized and often impoverished, when in the 1970s, their bright distinctive vibrant art became a source of strength and income. My husband Matthew and I were in Mount Magnet for one year to set up an Aboriginal-owned art gallery.

If you live long enough, or travel the world enough, you might find yourself as I did in Mount Magnet: so far out of your comfort zone and the normal you grew up in that you feel in almost-constant shock, in a de-realization, not quite grasping where you are or why. You will think yourself in someone else’s life, or in the life of another planet, in this case, Mars. I grew up from age twelve in a large city–namely New York City–and in the outback I was at the edge of myself.

I simply cannot understand, writer Charlie Baxter wrote to me there, the life you’re in.

Outsiders, in particular white women, refused to live with husbands stationed there: the school headmaster’s wife, the police officers’ wives, a co-worker of mine who packed up after three weeks. Doctors, veterinarians, the court judge and its officers, even most of the rough-looking miners were fly-in/fly-out.

Daytimes, some days, the nascent gallery put on cookouts amidst desert rock formations for local artists starting to paint again, and the townspeople. Men cooked kangaroo tails wrapped in aluminum foil in sooty black smoking fires, and sausages on a portable grill. Seeing my hesitation at tasting the sinuous kangaroo, Annie Walsh, an artist of the Stolen Generation, told me gently, “We eat it.”

Night times, to get out of town, Matthew and I took a six pack into the desert, pulled dry branches together for a fire, and watched the streaming white Milky Way, the Southern Cross with its Jewelbox blue and red stars, its dark recycler of stardust: the Coalsack Nebula.

It was in the desert that I learned that white people pick their constellations from stars–while Aborigines see them in the pattern that the darkness makes.

The town of Mount Magnet was built around a goldmine called Hill 50 in the 1890s. Outside of town, excavated earth, stripped of gold and value, sits in lifeless manmade hills. Craters collect mining water so toxic no one can swim in it. There is one road through town, and it is the Great Northern Highway, a two-lane massive mining road almost 2,000 miles long and built to withstand 170-foot roadtrains, a series of trucks latched into one long beast. Overtaking a roadtrain was to set fire to one’s nerves. Two people we knew died trying.

It was a 4 ½ hour drive to a good library or bookstore, so I stocked up with escapist titles set anywhere but in the outback: The Mysteries of Udolpho by Ann Radcliffe, Anthony Trollope’s He Knew He Was Right, critic James Wood’s recommendations. The New Yorker arrived in the outback each week like a relic—or a candy bar—from my former life.

It was in the town’s tragic thrift store, run a few hours a week by 76 year old nun Sister Monica Sparks, that I saw the electric yellow cover of The Nun and the Bandit by E.L Grant Watson. I hadn’t heard of Watson, but the title had me; I had visited D. H. Lawrence’s hometown in Nottingham as a student and The Virgin and the Gypsy was a favorite. 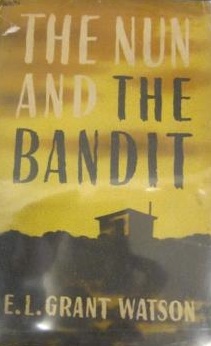 It turned out, Lawrence and Watson knew of each other. Both were born in England in 1885; both spent time in Australia. Lawrence read Watson’s first novel set in Australia. The Virgin and the Gypsy was published in 1930 after Lawrence’s death, The Nun and the Bandit in 1935.

There are obvious parallels. In both works, place is paramount. In The Virgin & the Gypsy, a clergyman’s daughter in a drab repressed English village is spellbound by a travelling gypsy who arrives in a flood. In The Nun and the Bandit, a young novitiate, Lucy, is held captive by Michael, a foul-mouthed and vengeful outcast deprived of his inheritance by a dissolute father who Michael then murders. Seeking revenge against his uncle, for the money and life he was denied, Michael kidnaps a young child for ransom, along with Lucy.

Upon beginning The Nun & the Bandit, I recognized the exact desert I was living in. Watson was a Cambridge-educated botanist who traveled for a year in Western Australia. He had come fantastically close to Mount Magnet, with guides both white and Aboriginal. He put into words for me the desert’s stunted bushes, its dramatic bleak escarpments, its arid plain. For him, the desert aroused awe; it was wilderness, a place of silence and apartness.

Kirkus Reviews, in its happy, annihilating way, summarized the book in 1941 as: “Contrast of pagan and spiritual–rather limited in appeal.” But the Kirkus reviewer had not been to this wilderness.

Writes Watson: “The silence was a vacuum… The silence was like a blow inflicted, a toxin in the blood to make her restless.” It was also ecstatic: “No sight of the man anywhere… The sunlight descending from such an intensity of blue and brilliance appeared not only to fill all the sky, but to pierce into the earth.”

That very desert was also a place of atrocity and massacre for Aboriginal people. Writes Watson, it is “a symbol of all that civilization has chosen to disregard. It is a vast interrogation mark, questioning itself.”

Once Michael kidnaps Lucy and the child, we know we are headed to a showdown between good and evil. By the novel’s climax, the murderer and the pure Lucy are deep in the outback and alone. Lucy has come to represent all Michael was denied in life: education, dignity, choice. He has decided that he will “have her”–as reward, or restitution.

He does not, however, want to be violent. He wants Lucy to “oblige” him – a euphemism; he wants her to accept him willingly. There are many ways to read this. The Nun and the Bandit is a potboiler. But the book is not prurient; it does not celebrate male domination. It could conceivably be a male fantasy – but it is more a redemptive fantasy than a sexual one. Not only does Michael confess his evil deeds to Lucy, but she forgives him his trespasses. When he is tried for his crime, it is for abduction and not rape.

How is the modern reader to accept Lucy’s shift from revulsion to acceptance? First, Lucy sacrifices herself for the safety and freedom of the child. She then averts physical violence. She never gives complete consent, as she is a prisoner. But both her hatred and his give way to compassion. The message of the book is profoundly Christian.

In today’s world, it feels inconceivable that a woman could accept her own rape. Yet women all over the world do it every day. It is a matter of survival.

After reading The Nun and Bandit I felt miraculously more at ease in the desert. When you name something, you define it, and even control it–and I was no longer isolated in my experience; I was no longer lost.

I gave my copy of The Nun and the Bandit to Sister Monica, who, like the silent wilderness, did not comment on it. She read it, and passed it on to Donna, who worked at Hill 50, where prospectors came scrounging for gold nuggets.

Monica came over for tea. When all seemed bleak and monochrome, she said, I should look for color: in the eucalyptus in our backyard; in the art the Aboriginal people were now creating and selling in the gallery.

I thought of my neighbor, a weathered young mother of four who stood in her backyard weeping and crying out that she couldn’t deal with life anymore. When I stopped over, she showed me the small rough dollhouses she had fashioned out of stones she had picked up in the desert, then polished in a tumbler into beautiful bright colored gems.

Sister Monica wrote down a set of virtues she believed in: Wisdom, Understanding, Good Guidance, Courage and Fortitude, Knowledge, Wholeness, and lastly, the one that stays with me most: Awe and Wonder. She signed it:

Be gentle dear friend with yourself.

Louise Warehame Leonard is the author of 52 Men (Red Hen Press), which she began writing in the outback, wondering if she would ever get back to her old life. 52 Men was featured in the LARB in “Why Can’t You Be Sweet” by Amanda Fortini. Louise‘s  “How to Date a Writer” is on the Rumpus (Funny Women #132).