In 1940, Irish novelist Francis Stuart traveled alone to Nazi Germany, leaving behind his wife and children. Stuart lived in Berlin for the next five years, two of which he spent making radio broadcasts for Irland-Redaktion, a German radio program that broadcast Nazi propaganda to Ireland. Stuart’s best-known novel, Blacklist Section H, fictionalizes this experience. Stuart’s legacy remains controversial today. Many Irish critics admire him as one of the most important Irish writers of the 20th century; some cannot forgive his Nazi ties. Despite this controversial status—perhaps because of it—little is known about him and his motivations. Most of his books are now out of print.

I first encountered Blacklist my junior year of college and spent the following summer tracing Francis Stuart’s path through Ireland and Germany. I also went to the University of Ulster in Northern Ireland, where I read Stuart’s diaries from the war years. Everything I learned added depth to the novel and made me question the roles and responsibilities a writer faces as I think about what kind of writer I want to be. The stakes of these questions seem almost as great in our time as they were in Stuart’s. What will art in Donald Trump’s America look like? What should it do? Although flawed in many ways, Blacklist Section H is a significant attempt to navigate and figure out what public work artists can and cannot do. 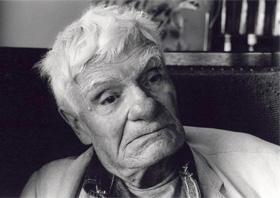 Stuart’s protagonist in Blacklist, H, believes that “nothing short of the near despair of being utterly cast off from society and its principles could create the inner condition conducive to the new insights that it [is] the task of the poet to reveal.” H’s conviction that poetry and literature come from a place of exile mirrors the foundation of the real-life Stuart’s interest in Nazi Germany. Stuart believed that he needed to go to Berlin to unlock a hidden part of himself, a dark yet essential part of his being, deeper than political belief. Throughout Blacklist, H repeatedly expresses his desire to be despised, as he struggles with his own apathy toward other people.

Although Stuart was in his 40s during the war, I like to think of Blacklist Section H as his bildungsroman. He spent his twenties and thirties in Ireland building his literary career and his family with Iseult Gonne (a prominent figure in Dublin’s literary elite). As his personal life began to fall apart—largely because of his own insecurities—he focused more and more on seeking the ineffable, mystical space that H yearns for in Blacklist. Even though he was 20 years older than I am now, I identify with Stuart’s stumbling attempts to combine art and politics while dealing with the difficulties of his personal life. What political responsibilities does a writer have and how should we as readers respond to a writer who held offensive or dangerous views? Ignoring their work seems almost as bad as venerating it. We may not be in a World War, but our political reality also demands art that takes responsibility for the world it comes out of.

Figuring out what Stuart did with this responsibility is complicated by his own attempts to erase all negative evidence from the war, which is ironic because of H’s belief that society’s scorn will elevate his art. In journals from the end of the war, Stuart often wrote that things were going badly “for us” or that “we” might face difficulties, a clear indication of the degree to which he had mentally and perhaps politically aligned himself with the Germans. Many of these lines have been edited; Stuart (usually in a different pen, possibly many years later) has crossed out the “us” and “we” and replaced these first person pronouns with more objective terms like, “the Germans.” 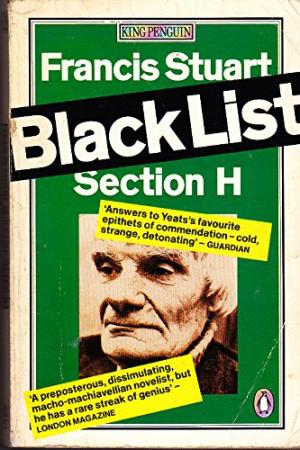 Early in H’s days in Berlin, he gets sent to Frankfurt to speak with a British prisoner of war who is a fan of his novels. Captain Manville asks H why he came to Germany—“siding with the enemy,” he calls it—and H replies that “The situation I’ve involved myself in, however disastrous for my reputation, and perhaps because it is disastrous, gives me a chance of becoming the only sort of writer it’s in my power to be.” H doesn’t fully endorse societal alienation until after he is settled in Germany. Bound to this choice, H attempts to make the best of it; perhaps being in such a place might be good for his career. At the end of the chapter, H muses, “Though being branded as a Nazi by those from whom most of his readers would have to come, scarcely argued well for his future, no matter how his work developed.” Living in Germany and being relatively apolitical doesn’t make Stuart a Nazi, . Stuart, who fled to Berlin because of personal insecurity about his work and his marriage, bet his literary career on the premise that public revulsion would transform his writing. And it did, but maybe not in the way he hoped.

In one of Stuart’s other post-war novels, The Pillar of Cloud, his two protagonists are able to achieve the artistic ideal that H so desperately strives for in Blacklist: “It was something which they could never touch or examine but they were conscious of it.” I feel a haunting sadness that this couple is able to reach what H never does. Other people might find what they’re looking for, but H will always be striving. And maybe that’s what I admire about Blacklist: for all of its obfuscation and posturing, it is honest in its documentation of one person’s attempt to make something out of isolation and to understand what these experiences mean. Sometimes I share Stuart’s wish—or perhaps his delusion—that his art might come from some secret mystical source rather than the world we live in. Although the politics of the novel fail, to say the H’s personal journey is remarkable. He runs away from his home and the life he never really believed in for something he hoped to believe in. It’s the story I’m not sure Stuart intended readers to find in his work – a true story of grappling with fame, art, family, and politics in an exceptionally charged setting.

Ultimately, I think Stuart’s downfall was his failure to realize that what made Nazi Germany ripe for significant art was precisely what he chose to ignore in the name of art. The artistic potential of Hitler’s Germany could never be disassociated from the reality of Hitler’s crimes. There is no ethical way to exist within the crucible to make good art while ignoring its political consequences. As the election results have made clear to me and so many others, this is a time for art to explore and resist abhorrent politics. As he began to write Blacklist, Stuart wrote, “I must renew myself inwardly. More discipline. Have been drifting too much. And there is much to do for which I need great stores of pure energy.” I think that’s how many of us feel right now.

Joseph V Lee is an MFA candidate in nonfiction at Columbia University.