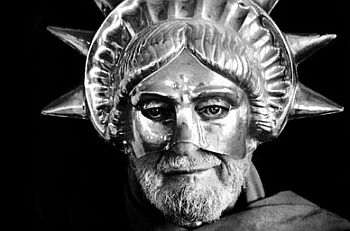 Tourists, we think, are responsible for stealing our street sign once a summer, sometimes more often. The sign, with its precious name, almost begs to be taken: Little Memory Lane. Our town, located in the Ozark Mountains of Missouri, probably invites sentimentalism as well. Our population is 408. Our houses, most overlooking the lake, nestle in the woods. Our gas station is the Mule Express, complete with a painted, polished wooden sign of a braying mule, where a group of gray-haired men talk over Styrofoam cups of coffee each morning.

Little Memory Lane, though, isn’t meant to make memory diminutive. Rather, our street and our collection of houses, called Little Mountain Acres, are both named for a man named Joe Little, who was raised on the land and lived on the land until he died. My neighbor is the one who tells me about Joe Little – he’s shared stories about him for over ten years, so many iterations that I can no longer separate what is myth from what is remembered, what is truth from what is wishfully imposed on the past. Most recently, my neighbor said that Joe used to sled with his brother down the steep, nearly half-mile hillside that is closest to my family’s portion of the land. Not too many years later, Joe was drafted for the Korean War. He trained at Fort Leonard Wood, got shipped off to war, and was hit by mortar. The story goes that Joe, after the initial impact of the explosion, imagined that he was in a snowy, silent place. He pictured himself on the hillside where he used to sled. He said he saw a few red cardinals dotting the snow in front of him, just out of reach. My neighbor says that the cardinals protected Joe for a few minutes from the knowledge that he was bleeding heavily. The land was his way out of the pain. 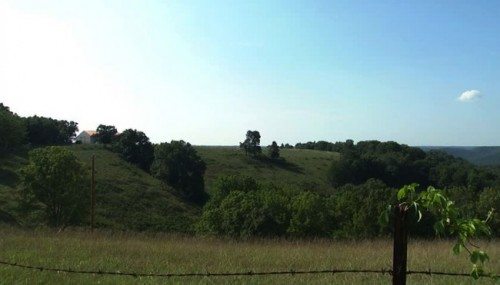 Joe is now deceased, but the oral history of Joe’s connection with the land is reminiscent of lines within Robert Duncan’s poem “Often I Am Permitted to Return to a Meadow:”

This poem serves as the epigraph to James Galvin’s The Meadow, a book that was recommended to me by a dear professor in college. Though I’d moved every one or two years my entire life, it seemed I was homesick for the first time; my family has owned our portion of Joe Little’s land for over ten years now, which is the longest I’ve known any place. I bought the book and read one of its one- to two- page sections a night. Each made me ache for my own land in a fierce, almost visceral way. 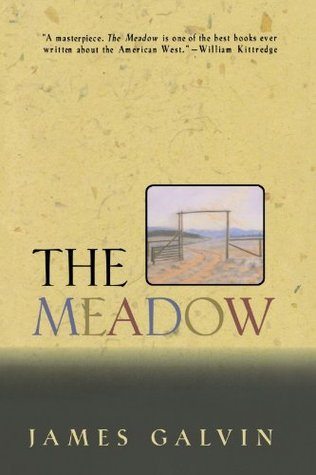 In Galvin’s book, the land is not only a physical place. It is also an escape, a “property of the mind,” a character, and a palimpsest on which people over time have written their stories and seen them dissolve. Though the meadow is the book’s central subject, Galvin’s authorial gaze lingers on one of its residents, Lyle. Lyle “lived a life from which everything was taken from him but a place. He lived so close to the real world it almost let him in.” Galvin describes Lyle almost as being of the land, with “thinning hair…the color of last year’s grass next spring, fresh from under the long snow.” He has lived in a home within the meadow for over fifty years. Despite this, he still doesn’t see the land as his. He comments, “If you want to know who really owns the land, don’t pay the taxes for a while. Then if you want to know who owns it even more, just look out the window in a blizzard. That’s the landlord’s face looking in, snooping.”

Galvin deftly maneuvers between realms of memory, dream, and reality, and through the nuances of loss and pleasure that the meadow brings. To craft Lyle’s story, for example, Galvin weaves together several dreams that he has about Lyle, some of Lyle’s diary entries (“Worked in shop trueing up grindstone. Cold and windy.”), sections of what might be deemed oral history, and narration of Galvin’s own interactions with Lyle. Other secondary characters depict the ways that the meadow both nurtures and erodes. This collection of individuals – Clara, App, Raymond, Oscar, and others – bale hay in the snow, kill a beaver out of necessity, drink too much, build homes on their own from logs hewn by hand, nearly die of hypothermia, construct a mausoleum for a dead hummingbird, die of cancer, and find one of their father’s bullets in the heart of a tree.

There’s an alluring, lyrical rhythm to Galvin’s prose. Clouds are personified (“They let down their hair, like brushstrokes on the air, like feathers of water, like the principle it was named for, sublime indifference its gesture, its lovely signature over us.”). The location for a future dam is described as “where the rock outcrops pinch off the two parts of the valley like a girl’s waist,” and inverting that image much later is a woman “whose waist was so slender he could encircle it with his hands, like the low hills of timber surrounding the meadow.” A meditation on the idea of memory describes the way a man’s mind “feels to him like a packrat balanced on a stringer in the barn, sluggishly feinting back and forth, firmly in the sights of some ranch kid’s .22.”

If I yearn for Galvin’s meadow or seem nostalgic for a place I’ve never been, it is only because he turns me back toward the place in Missouri that I always considered to be mine. At one point in the book, Galvin drinks straight from a bottle of rum and passes it along to the men standing around him. The men, all of whom own land in the meadow and have known Galvin for years, are “blind drunk, taking turns weeping from rage and grief” because they have learned that the big ranch surrounding their land has been sold to Colorado land developers, who would take “the land we’d roamed free all our lives” and cut it up into forty acre “parcels” for people who might want a plot of land to use for recreation. I empathize with this heartbreak: I have moved away from the land I call mine; my neighbor who knows all of Joe’s stories is growing older; and a few years back, a tornado took my family’s home. There are ways that Little Memory is becoming more and more just that, something that exists in my mind more than as an actual place, but Galvin reassures me that “underneath its feral pelt, the meadow is still the meadow, entire,” and I take that as hope.

Sometimes now, when I visit the new family house that we built on our land, I imagine Joe Little napping in his wheelbarrow out in the front yard, just as my neighbor says he used to. I imagine where the bones of my old house used to stand. I imagine my books and photos from my tornado-stricken room at the bottom of the lake, the faces and words slowly disintegrating. As Lyle would say, “It mighta been here but it’s gone now.”

For the most part, I think Lyle is right. But I also think that Galvin, in the way he describes Lyle’s meadow as a “hemorrhage of green, and a green clockwork of waterways and grasses,” is right as well. He reminds me that seasons bleed together, that one text is written in the margins of another, and that myth and memory work together to create a place where I might dwell for a while.

Jacqueline Alnes is currently a PhD student in the creative nonfiction writing program at Oklahoma State University. She earned her MFA from Portland State University. When she’s not teaching, reading, or writing, you can probably find her running long distances, bird watching, hiking, or baking way too many cookies.