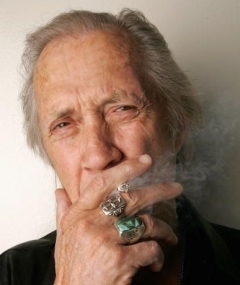 Not even David Carradine could karate chop his way out of death. He did, however, leave behind an autobiography of peculiar staying power. Here’s Geoff Nicholson on the unexpected pleasures of David Carradine’s memoir, Endless Highway.

“When I was a little kid, I had a problem with God.” This, I suggest, is a rather surprising opener for a Hollywoodmovie star autobiography, although since the author is David Carradine, perhaps we shouldn’t be surprised at all. The autobiography, Endless Highway, was published in 1995, at a time when he was in the middle of the comeback TV series Kung Fu: The Legend Continues. Commericially, this was no doubt a good time to release the book, though it’s a long way from being a quick TV tie-in. It runs to nearly 650 pages, and even if some parts of it feel a bit rushed, it’s clearly a work of great effort and genuine commitment.

When I first moved to Los Angeles in 2003, I went to a “Hollywood Collectors and Celebrities Show” in Burbank, an event at which movie and TV stars (some far more famous than you’d imagine) sat behind tables, peddling their wares: signed autographs, posters, DVDs, and, in some cases, autobiographies. And there was David Carradine.

His career was perhaps in the doldrums—Kill Bill would have been completed though not yet released—but even so I was amazed to see him there. Was he really so desperate for money or attention that he had to make nice with a bunch of rubbernecking plebs? Apparently not. He didn’t make nice at all. He sat there doing a crossword, head and eyes down, oozing hostility, daring anyone to approach. I certainly didn’t dare, though I wanted to. Consequently, it was a while later that I bought Endless Highwayfrom a used bookstore.

The fact that it’s dedicated to a bunch of people including Plato, Shakespeare, and James Dean didn’t bode well. But it’s also dedicated to Dad—and that’s very significant. Dad was the legendary bad-boy actor John Carradine, the man who, according to his son, said to Katherine Hepburn, “Why don’t you take your Connecticut station-wagon accent and go home?” And she did.

The book tells us that the Carradine household was predictably troubled. Father was a jobbing actor who came and went, and even when he was there he was otherwise occupied. David writes, “When he was home, it was usually ‘don’t bother him…’ The only time I could really depend on having a real talk with him was when I needed discipline. It was almost worth a whipping just to get his attention.”

After his parents’ divorce, he was bounced around various dodgy educational establishments, including a trade school, Straubenmuller Textile High, inManhattan, where “between classes, I would be jumped in the halls and beaten. It had something to do with my dad being famous; specifically, with the fact that he had shot Jesse James.” Of course, he told them his dad was a hero.

The father remained elusive, and even after the son had grown up and become successful, their relationship was as difficult as ever. David came up with the idea for a theatrical season in which he’d direct Dad in King Lear, then Dad would direct him in Hamlet. It sounds like a crowd pleaser to me, but unfortunately it never came off. David writes, “He asked me, ‘How do I know you can play Hamlet?’ I asked him, ‘How do I know you can play Lear?’ Then we got in a big fight—family stuff.”

David organizes a party at Morton’s restaurant and Dad, aged seventy-six, arrives, picks up a twenty-two-year old German girl, and by the end of the evening is necking with her in the back of a Rolls Royce. I guess not every son would think this was endearing behavior, but when Dad comes up with the line “You’re only young once,” all is likely to be forgiven. And, of course, he had actually turned up at the party.

Inevitably an actor’s early struggles tend to be more interesting than his later successes, but Carradine remains consistently skeptical, and just this side of cynical, when it comes to his own career. In the army he enters a talent show, delivering the abdication speech from Richard II, but loses to a Hopi hoop dancer. Carradine can see why it happened: “Well, he jumped through fire, I just talked loud.”

Later, when he’s a success, he meets Marlon Brando and finds him utterly compelling. “He was looking right through my soul. His face was colored with a golden light. I was transfixed. Suddenly the golden light faded… I turned around and realized the sun had just set behind me. He hadn’t been looking at my soul, he had been watching the setting sun.”

He agrees to play a cop in the movie Q: The Winged Serpent. Then he reads the script. “I said to myself, ‘I can’t do this. It will destroy my career. But I have to, I said I would—I need the money, my house is in foreclosure, Linda will lose her Ferrari. We’ve got to keep one Ferrari in the family.” 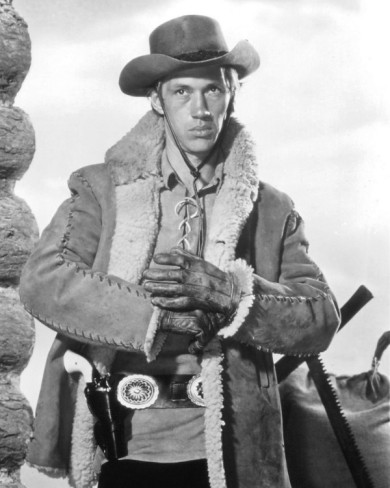 Ah yes, the Ferraris. The Carradine lifestyle requires a lot of expensive props, a lot of expenditures. He spends several small fortunes on houses, fine wines, drugs, guitars, and cars; the rest he just wastes. Somehow it never sounds like boasting. The fact that he enjoys his toys so much, and that he’s only ever one step away from financial disaster, even collecting unemployment at one point, makes it all bearable.

And just once in a while he’s a pretty shrewd social observer. He was in San Franciso at the time of the Beat Generation, and he didn’t fall for that one. “The ‘generation’ consisted of, as far as I could tell, about fifty people, mostly male—the scene was a little rough for girls.” And then he finds himself in newly independentZimbabwe: “Everywhere were happy faces in fatigues carrying semiautomatic weapons.”

Look, I’m not trying to pretend that Endless Highway is somehigh point in Western art, but by the standards of mostHollywood autobiographies, it’s downright Proustian. There’s something about Carradine in print that’s very similar to Carradine on screen. He’s compelling; likeable without begging to be liked; he commands your attention.

After his sensationalized death in a hotel inBangkok[in 2009] I went back to the book. It had been a while and there were gaps in my memory, and yet how could I have forgotten, there on the first page, below the paragraph about having trouble with God: “When I was five, I tried to hang myself in the garage by jumping off the bumper of the Duesenberg.” He failed, obviously. His dad burned his comic book collection as punishment. Of course, as a five-year-old, he probably didn’t really intend to commit suicide. Equally, most of us don’t believe he actually committed suicide in that hotel room inBangkokeither.

Geoff Nicholson is the author of the novels Footsucker, Bleeding London, and The Hollywood Dodo (among others) and non-fiction such as Sex Collectors and The Lost Art of Walking.