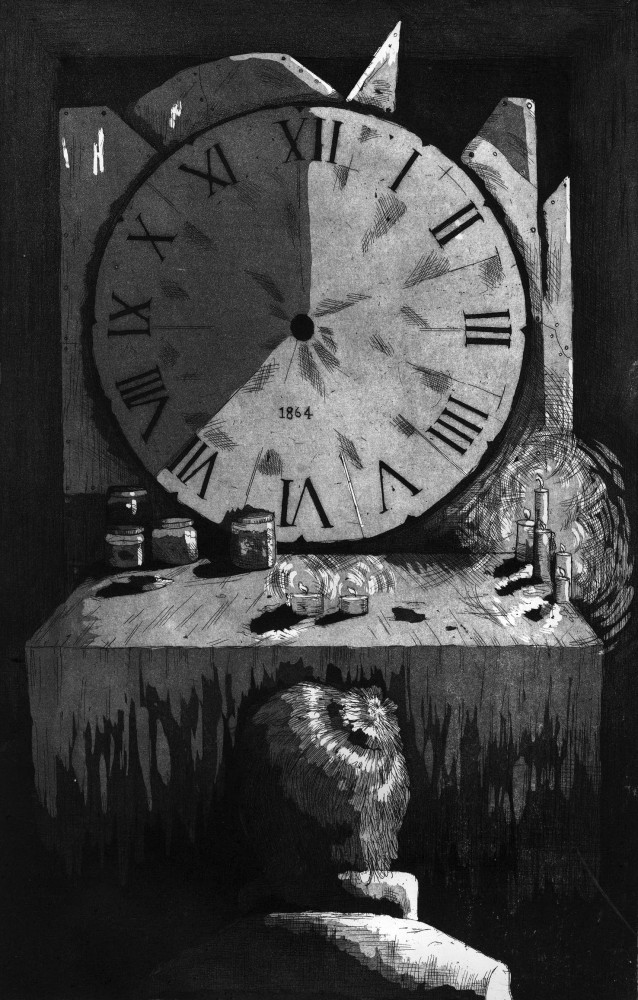 An only child, I sought out things to do.  There was the time I fashioned a string-pulley system in my bedroom.  Whenever I opened the door, the string pulled taut, and the bulb turned on.  Later, I spray painted cryptic messages on the walls in the hidden attic, my ad hoc stronghold, accessed by crawling through a closet.  Late one dull summer night, my friend Ralph called.  Ralph liked to listen to his stepfather’s police-radio scanner.  Something was happening a few blocks away, he told me.  After discussing the situation, we finally decided to venture farther into town.  On the roof of the eighteen-story Sundowner Hotel and Casino stood a man, his arms waving.  The man sat on the ledge, stood, sat again, threatening to leap.  Even though I led a somewhat secretive life away from my mother, I knew I shouldn’t be there.  This was a new kind of danger, an unfiltered glimpse into the adult world.  I decided to stay anyway, and watch.

Ten years later, when I came across The Wasp Factory, I immediately connected with Iain Banks’s world of unsupervised boyhood.  I understood its untamed protagonist, the motherless Frank Cauldhame.  Frank watches over an isolated island in northernScotland, which connects to the mainland via bridge.  Where others might find serenity amid dunes and mist and seaside views, sixteen-year-old Frank has fashioned the place into his own bizarre kingdom.  He’s developed rituals, terminology, even a quasi-religion: “I slowly made myself unchallenged lord of the island and the lands about it.”

In Frank-land, juvenile notions of masculinity run wild.  Frank builds dams and erects toy model towns, only to then flood the towns by blowing up the dams with pipe bombs.  His weaponry stash is impressive: slingshots, knives, an air rifle, a trowel.  As warnings to outsiders, he plants “Sacrifice Poles” around the island, on one “a rat head with two dragonflies, the other a seagull and two mice.”

Reading about Frank’s exploits, I saw flashes on an earlier me.  Frank runs his territory with soldierly precision, like I did on my old block; but he does me one better by crafting his own lingo and island map, zooming about stealthily, from “Silent Running” to “Emergency Speed.”  While I never captured animals for sacrifice, my friends and I did wreak havoc on lizards with fireworks and BB guns.  I, too, had a weapons obsession.  I, too, hid boy-items around my neighborhood: toy guns, nunchucks, et cetera.  I once convinced my mother to buy me a Japanese throwing star, which I carried for protection, even though I didn’t really know how to use it.

Though I felt odd as the child of a single mother, my oddness didn’t hold a candle to Frank’s gothic childhood and adolescence.  For one, he shares a home with his gimpy and ineffectual father, a chemist and bona fide liar.  Father and son are mysteries to each other.  Frank keeps his secret—the Wasp Factory—stored in the loft while his father guards a locked study.  Homeschooled, Frank is literally cut off from the world and has learned to “live without other people,” but with his “unfortunate disability”—mutilated genitals.

Frank creates his own system of symbols to cope with his loneliness and disfigurement.  Central to his beliefs is the Factory, which is really “the face of the old clock which used to hang over the door of the Royal Bank of Scotland in Porteneil.”  Scrounged from the town dump, the boy has transformed the clock into an oracle and torture chamber.  Frank releases wasps inside it.  At each numeral “the wasp can enter one of the twelve corridors through little wasp-sized doors” and “sooner or later they all choose…and their fate is sealed.”  Judging by the names attributed to each trapdoor, these twelve fates aren’t happy ones: Boiling Pond, Spider’s Parlor, Antery, Acid Pit, et cetera.  Each door is a portent, especially Fiery Lake, the corridor one wasp enters when Frank consults the Factory about his half brother, Eric.

At 184 pages, the novel is short and thin on plot.  It’s primarily the tale of why Frank is Frank.  But his half brother, who escapes from a mental institution at the beginning, helps move everything along.  Eric taunts Frank by suggesting, via phone calls, that he’s coming home for some terrible purpose.  Eric sets dogs on fire, among other nasty things—not that Frank is much better.  Did I mention that Frank describes how he once killed people, two cousins and a brother?  Reading Frank’s confession might feel shocking if his methods of execution weren’t so humorously over-the-top, so deliciously macabre, and if he weren’t himself so mischievously self-aware.  Frank goads his youngest brother into repeatedly smacking an old beached German bomb; he renames that section of the island the “Bomb Circle.”  And the moniker he assigns the spot where he once slid a poisonous adder inside his cousin’s prosthetic leg?  “Snake Park,” naturally.  But those shenanigans are all in the past.  “It was just a phase I was going through,” he explains.

Iain Banks isn’t as well known in the United States as he is across the pond, but he should be, if simply for his unparalleled and at times brutal originality.  The Wasp Factory was at first largely met with apoplectic outrage in the United Kingdom—“Rubbish!” claimed the Times of London upon the novel’s 1984 publication—but over a decade or so its reputation grew, and by 1997, British readers, in a highly publicized poll, gave it a place in the top one hundred books of the century.  (Number thirty-two, no less.)  Readers can see from this debut novel where Banks was eventually headed.  As Iain “M.” Banks, he’s written thirteen science-fiction books, plus a dozen or so others as just Iain Banks.  Banks loves world building and has an eye for apocalyptic scenarios, which is certainly true here.  He enjoys undermining expectations and playing games—also true here.  But this first book is singular, exuding a deep, eerie resonance: he nails the inner life of a wayward boy so well.

And Frank Cauldhame is defiantly wayward.  Soon he’s prepping for Eric’s arrival, fearful of what the Factory foretold.  FieryLakesymbolizes inferno; will Eric burn everything?  Banks complicates the denouement when Frank eventually gets a peek inside his father’s locked study, and then the inevitable happens: Eric returns, the father confesses his own startling secret, and the island, and Frank’s weird sorcery over it, loses potency as young Frank must now confront what’s been lurking inside him all along.

We’re shaped by our early lives.  These days, I sometimes think about that man atop the casino’s roof.  And I wonder how, and if, witnessing such an event recalibrated something inside me, if watching someone’s life sway in the balance removed some filter for me—made me a witness, like Frank, to the shadowy nature of humankind.

Don Waters is the author of Desert Gothic, a story collection, and a forthcoming novel, Sunland.