Growing up, I hated the outside. My appreciation only started in my twenties, a year into dating the woman who would become my wife. We had gone on a miserable, rainy camping trip (the first of my life), and a few long walks. I didn’t enjoy these excursions, but I liked being with her. When she invited me to go up Sourdough Mountain in northern Washington state with her and her dad, Jim, I reluctantly accepted.

The trek was brutal. The trail gains 5000 plus feet in only 5.2 miles­­ and runs straight up, broken only by demoralizing switchbacks. Just after we reached the level of alpine meadows, about three-quarters of the way, Jim’s sciatica flared up and he needed to lie down on the trail. He told us to go on without him.

I had made a big mistake. Here I was on my first real hike and I was responsible for getting myself up the mountain and for getting him, a 62-year-old, down it. My future wife and I went on because we didn’t know what else we could do.

The meadows gave way to bare rock and clumps of August snow. We reached the top and felt anything but triumphant. On the far side of the crest, we spotted an old, clapboard fire lookout. It was a modest structure, little more than walls, windows, and roof. But this evidence of human hospitality and ingenuity rekindled my resolve. Someone had managed to get glass windows up this high; surely I could find the means of stumbling my way down.

We dropped our packs, regrouped, and turned back. We found Jim back on his feet and charging along, grimacing with each step. I gave him a drink of cold snow-water from my bottle. We finished the climb, all three together. 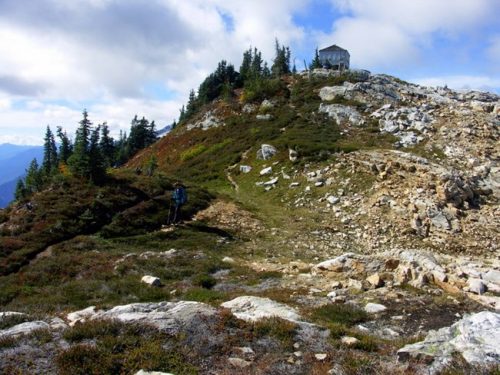 Back on top, I peered in the window of the lookout and saw a framed piece of paper hanging on the wall, a hand-written copy of the poem “Mid-August at Sourdough Mountain Lookout.” I couldn’t make out every line, but I didn’t need to. I had read the poem in preparation for our trip and return to it often. We made camp nearby, surrounded by a valley made of the same trees that Gary Snyder, the author of that poem, had studied for the spark of fire during his tenure as a lookout in that very building. I nursed my weeping blisters and ate freeze-dried macaroni. Jim read a book. I felt like a different person that night, sleeping in a borrowed bag, looking down on the clouds. I didn’t know how I had gotten myself up there.

I learned the next day that going down a mountain is even harder than going up. You can stop and catch your breath while ascending, but you can’t regain your freshness going down. Each clumsy, heavy step sends a spurt of pain shooting from your foot to your groin. Gravity pulls at your heavy pack, leaving only shaky legs between you and the dirt. Before long, I stumbled and fell, tearing my pants where they covered my knee.

I’ve gifted Jim many books over the years, and his love of reading has made my son-in-law responsibilities easy—pleasurable, even. We go on long walks and we read alone, together. After we got down Sourdough, Jim gave me his copy of Seth Kantner’s Ordinary Wolves. The book first appeared in 2004 to excellent reviews and some acclaim, but it never made it onto my radar. Jim happened upon it on the shelves of his local independent book store that specializes in small press titles.

Set in Alaska during the Reagan years, the novel tells the story of Cutuk, a blond-haired, blue-eyed white boy growing up in a sod igloo miles away from any neighbor. The reader gets to know his family by seeing them practice a radically minimalist lifestyle. They hunt with dog-sled teams and make their own knives from discarded chisels. Buying anything is a last resort. Even proper eyeglasses for Cutuk’s sister are considered an unacceptable luxury.

The core conflict in Ordinary Wolves arises between Cutuk and his father. Abe, a painter left Chicago to come to Alaska, dragging his wife and his children with him. Abe finds the sustainable existence he wants in a life left behind by nearly everyone, especially the native Inupiaq people whose ancestors developed the original hunting and igloo construction techniques upon which he and his family now rely. Most contemporary Inupiaq ride sno-gos, hunt with automatic rifles, and watch television like everybody else. Cutuk’s mother has fled south before the beginning of the novel, and Cutuk grows up trying to prove himself as a “real Eskimo” by hunting, skinning, and carrying on traditions that are not his family’s own. 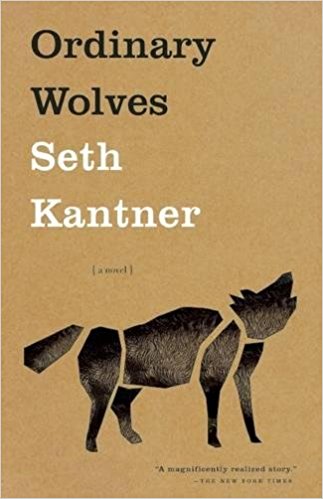 Rather than rebel, Cutuk tries to outdo Abe’s own commitment—to not just eek out the subsistence-level existence, but to become a hunter worthy of the living legend Enuk Wolfglove. Cutuk yearns to live an intentional life, too, but is unconvinced that he can meet his father’s standards. This tension comes out when Cutuk makes his first trip to the big city of Anchorage as a young man. His father has prepared him to live in the harshest of all conditions, but Cutuk doesn’t know what to do in a world of Coca-Cola and store-bought ice. Cutuk thinks back to Abe: “He seemed to have taught Don’t chase money, that’s a cheap way to live. Don’t kill animals for glory, that makes you the worst kind of bully. But what was in between? What did he want us to do?” At an Anchorage bar, a pretty girl asks him about himself. The conversation soon turns to Cutuk’s favorite topic: hunting, his main source of pride and food. When she asks what kinds of wolves he hunts, Cutuk can only manage “J-just ordinary wolves.” This is his awkward attempt at finding an authentic description, one that won’t come off as bragging or boring. It’s been my experience that all good stories are told with these concerns at the front of one’s mind. There are many things worth sharing with another person, but the description fails if it only helps the listener better know the storyteller.

In Kantner’s book, Abe teaches his children to beware consumer culture, of easy and temporary answers. He opts out of American society because of a conviction that desire taints experience. Whenever Cutuk desires something beyond his father’s life, Abe chastises him: “What are you, an everything-wanter now?” Abe sees these “wants” as the first steps on the track to laziness and greed, the very qualities that despoil the natural world and poison honest life.

Many parents end up feeling very different from their children; others feel like they have succeeded in passing along their core values, that they’ve made people like them. I imagine many parents hope for this above all else. After returning home and confronting his father, Cutuk explores their encounter:

“I’d come from farther out, gone farther in. How could I have fooled myself? I was no      less scathed than the rest. And in the end maybe that was all I needed to know. I didn’t need to be Eskimo. I didn’t need dead wolves or gold, airplanes or other shiny things.”

Here Cutuk expresses a conflicted sense of his place in the world. He’s drawn to the purity of his father’s lifestyle but knows that he can only control so much. Even the best hunter in the world cannot make the last frontier wild again. Shortly thereafter, in the book’s final hunt scene, Cutuk pulls a shiny thing out of his pocket: a foil-wrapped candy bar. He eats it for some quick energy and to cover the taste of the dried fish that he shared with his sled dogs. With this simple act of defiance of his father, Cutuk admits that he cannot escape human society, no matter how pure his ideals.

Cutuk comes to see that Abe wants everything, too. Abe’s everything is abstract, but it is based in greed, all the same. Abe tries to live a life that’s no longer possible, a solitary struggle against forces too expansive and invasive to amend. To the outsider – to most readers, perhaps – Cutuk and Abe are both bearded hippies who have returned to the land. But they are not the same. Cutuk’s moment of realization alludes to the rift between all fathers and sons, all parents and their children. Shared values do not guarantee a deep relationship.

Much of the Alaska of Cutuk’s (and Kantner’s) youth is gone. The nature tourism industry, increased exploration for deep-sea Arctic oil, and even an emergent genre of reality television about life on this northern frontier have all taken their toll on father and son’s treasured landscape. Abe defended his ideals, but still lost what he was protecting. Cutuk follows Abe’s lead, but branches off and takes his own route—his dog team leaving their own paw prints in shallow, wet snow.

Literature gets us just about as close as possible to transcending the rifts between people, but it doesn’t succeed entirely. The books we love and the people we love are bittersweet reminders of all the spaces in this world we cannot master. The best we can do is to try and describe them faithfully.

David Haeselin teaches at the University of North Dakota. He is currently worrying about whether writing a book on authenticity makes him sound like a poseur.