Behind the half-closed shutters the dining room smelled as usual of slightly acid fruit and a well-polished confessional. A ray of sunlight fell across the table, lighting up their hands as they held the dishes and broke up the bread. Alice thought her husband looked frivolous, with his raised little finger, while Michael watched the movements of Alice’s long nimble hands, the long-fingered hand which had written to Ambrogio, which had opened to Ambrogio a door whose hinges made no sound . . .

When I first read Colette’s novel Duo, it was Eastertime in 2007. I was living in a 350-square-foot studio in Brooklyn. When I wasn’t proofreading or reading and writing stories for my graduate program, I was walking to get some air. I had passed the phase of being thrilled to live in New York and had settled into a domesticity with my neighborhood. The baristas knew my coffee order; I had neighbors who were good friends, with kids; I had my choice coffee shop where I’d write and flirt with a Hungarian waiter. It was domestic and comfortable, and yet, when I went by the flea market at PS 321, I rarely bothered to sort through the funky frames or knickknacks or beaten up furniture. It wasn’t that kind of domestic. The neighborhood, though full of single writers like myself, was overrun, as I used to put it, with families, with homes, strollers, routines. On Saturday mornings, I felt grateful not to be one of those families getting out of their apartments to begin their day of duties, yet I would walk past that flea market with my skin tingling, happy to accept even pollen landing on me, just for a sense of being touched.

My writing teacher had put Duo on my reading list for the month. I should first explain that Duo is one novel of a pair, the second being Le Toutounier, a sequel Colette wrote six years after the first. While I did read and like the second, it was Duo that set me reeling. 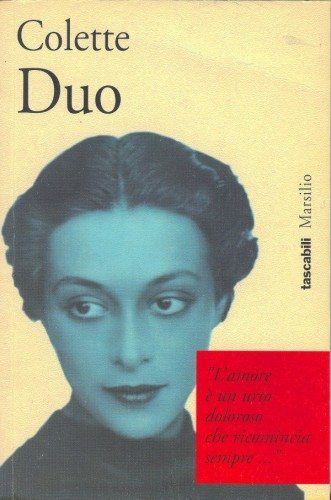 The novel covers a momentous few days in the life of Alice and Michel, who have been married for ten years. It is early spring, just past Easter, and we see them at their country home, in the village of Cransac in southern France. Though they are on vacation, their days are punctuated with routine; the rather stern servant Maria announces each mealtime with a bell, and Ambrogio, the manager of Michel’s theater, calls from Paris daily with updates on how things are going (in general, not very well). Alice and Michel spend most of their time in the closed-off “library dining room,” with bookcases that reach the ceiling, a sofa with a well-worn blanket, and other loved, familiar objects. It is within this contained space that Michel discovers, quite by accident, a love letter from Ambrogio to Alice in a blotter. The rest of the novel traces, nearly moment by moment, in evocative and precise detail, their marriage falling apart; at the same time it reveals their undeniable love for one another.

I became immersed in just a few pages. Colette makes writing seem so easy—slow down the moment, capture every sensual nuance and every turn of the mind, show light, show dark, show characters masked in dialogue and unmasked in italicized thought. Show how and what two lovers know and notice about each other.

And yet, as anyone who writes knows, such writing is ridiculously difficult. I kept asking myself: How does she do it? How is it that her sentences are so light on their feet and yet penetrating? Take this:

. . . he sighed with relief at seeing her so like herself, her mouth barely touched with lipstick, her lower lip broad and often chapped, her upper lip short and drawn up by her nose—that little nose that was slightly flat, slightly crushed, ugly, Cambodian and inimitable—and those eyes especially, elongated like leaves, with their mingled green and gray, pale in the evening by lamplight, darker in the morning.

Michel is so aware of the woman he loves! He knows the subtle shifts of color in her eyes at night, compared to the day. He spends time looking at his wife, inspecting and appreciating every detail.

And notice the length of this sentence; I’ve not even included the whole thing. It reminds me of one of Woolf’s, with the parenthetical detour about the nose. It’s as if we’re inside his head, seeing what he sees in every minute detail. There’s a swinging quality to the language—the lower lip versus the upper lip “drawn up.” Pale-darker, evening-morning. There’s a stall with the pair “slightly flat, slightly crushed,” but then a swoop down to say outright “ugly” and “Cambodian and inimitable” to finish it off. But what is that word “Cambodian” doing in there, I wondered? Is it meant to be a downturn of the word “ugly,” that is, a racist insult? Or is it, because it’s paired with “inimitable,” meant to praise the “exotic”? Either way, it hints at the “other,” and continues the setting off of opposites to keep the language lively, like a volley.

Yes, I was awed by how Colette so skillfully conveyed the couple’s knowledge of each other (as in, Alice’s eyes were “always more confident with the approach of evening”). But I also wondered why the book hit me so hard. I stopped taking it with me on the subway, because at one point, there I was in the corner seat, wetting the pages with my tears. Maybe it was because their library dining room recalled my little studio, or because the new flowers on their crabapple tree reminded me of the bursting blossoms on the magnolia tree outside my window. But the most likely reason I felt keenly pierced by the account of such a love was because it deepened a loneliness I often pretended not to feel.

The slow passage of time, the recording of every gesture, also made it feel real. The story details the arrival of morning, breakfast, lunch, an afternoon slumber, the change in the light in the early evening, the dinner bell, and even sleep. All the while, we are witness to Alice and Michel’s momentary observations, at times their inner dialogue, and their love for one another, as they navigate the shift in the dynamics of their relationship.

I read the ending three times to soak it in. (Don’t worry, I won’t tell what happens.) I felt a loss, and I was sorry that I wouldn’t be able to read it the same way again.

When I read Duo again just a few weeks ago, the experience was indeed different. It seems my loneliness had caused a blind spot. Yes, there was love, a great love, but I noticed this time that Alice quite early on starts eyeing the door and fantasizing about her sisters’ apartment in Paris, with whom she had lived a bohemian life, before Michel—the train’s whistle riles up her imagination. As the novel progresses, she indulges more in thoughts of being in Paris with her sisters, until it becomes a longing for freedom, for disorder, and a lack of routine.

Duo laid bare my solitary state. Though I was living the life Alice craved—in a city of artists spending my days as I wished—I secretly longed for order, routine, and most of all, a deep knowledge and love of another.

Cheryl Pappas once lived a freelance life not only in Brooklyn but in Florence, Italy, where she wrote about the streets of that city for The Florentine, an English-language newspaper. Her work has most recently appeared in Mulberry Fork Review. She now lives in Boston and is a full-time editor at the Harvard Art Museums as well as a full-time wife and mother. She holds an MFA in Fiction from Bennington Writing Seminars. Her website is cherylpappas.net.